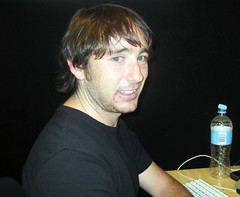 After joking that I’d be sabotaging their internet connection and distracting them with incessant bad music throughout the event, I thought I’d better offer up an olive branch and get to know the New Zealand FullCodePress team a little better.

I managed to grab a few minutes with Tim Connor, the programmer for the CodeBlacks, to ask him about the CMS that the New Zealand team have chosen to power their FullCodePress site.

SitePoint: First up, tell us about BrowserCMS. I’ve never heard of it. When I first Googled the term, all I could find was information about a J2EE product that comes with a $25,000 license fee… that doesn’t sound like a good fit for your non-profit client, surely?

Tim: Well, BrowserCMS is open source. And it is free. It was originally a J2EE project, and it was originally commercial. The company that was building it decided that J2EE was not the path for them, and they wanted to move to Rails. So they did that, and Rails being an open source project, they decided to make the whole thing open source.

This is version 3 of BrowserCMS, right?

That’s right. It’s actually still in beta. I think a lot of things are these days, right? The perpetual beta!

So have you played with it a lot?

Not a lot, I must admit. I am a Ruby on Rails developer, so that’s the main reason for using it. I didn’t really want to go down the road of using WordPress or anything PHP-based.

Is that just because you have a preference for Ruby?

Yeah, well it gives us a lot of flexibility. It gives us the power that you get from a Rails app. It means we can fix more complex problems, and hopefully deliver a better site.

Did you consider any other Rails-based CMSes? Typo, for instance?

There aren’t really any that I heard of. There are blogging tools, like Typo, but not really any fully featured CMSes that I’m aware of.

So do you have any concerns about whether the CMS is up to the challenge of a production-ready web site for a client?

Rails obviously has a bunch of, for want of a better word, “Web 2.0 functionality” … Prototype and script.aculo.us are installed … will you guys be adding any of the bling that the “full stack” provides?

OK, so do you plan on bringing some of this flashiness and user experience enhancements to the client-side for this site?

That’s time-dependent. We’ve only got 24 hours, so we’re going to get the core stuff done. And if we’re not too tired, we’ll see what we can do.

And what other preparation did you do leading up to this event?

To be honest I’ve been pretty busy working, so not too much! Aside from downloading a lot of source code things that I knew would be on the server. There were a few things to make sure that the technology was going to work for the project. But other than that, not too much. I’ve got quite a library of previous work available to me.

And what can we expect when it comes to review time, after you’ve been up all night?

We look forward to seeing it. Good luck and thanks for your time Tim!

Why Would You Write Your Own CMS?James Edwards