Many people have tried to create interfaces in Flash, but have become overwhelmed by the whole process and never come back to it. That’s a real shame. This article outlines tips and methodologies for creating Flash interfaces using graphics applications, good planning and simple logic.

The Flash drawing tools have been around since the earliest versions of the software, and have not progressed a great deal over the past few years. The creation of an effective interface using only the tools in Flash can be painstaking, difficult and downright frustrating for newbies and hardened professionals. This is why most people tend to develop their graphics in external graphics packages and then import them into Flash for fine-tuning.

Interface design for any end medium can be a tricky business; finding an effective balance between usability, functionality and aesthetics is the Holy Grail for designers. There are several different platforms for which you might create a design, but none is as tricky to design for as the Flash Player.

I don’t know how many times I’ve seen a good concept let down by poor execution and hap-hazard interface planning, but both issues can easily be remedied if you follow a few simple rules of thumb. These rules aren’t set in stone, but they will help you along the path to designing effective interfaces in Flash.

I’ve packaged up the files we’ll use in the tutorial — download the working files here.

There’s an old maxim that my father used to tell me: ‘Prior Planning Prevents Poor Performance’. It’s so true! If your interface design is poorly planned (or largely unplanned), it will take much longer to create, and you’ll undoubtedly introduce flaws that will require additional work to fix.
If you take time to plan the interface — the way it looks and the way it will function — you are already most of the way to an effective design.

What’s the simplest way to plan out a design? Well, for me, its either old fashioned paper and pencil or, if I’m at my computer, my tablet and pen. I usually start by sketching out the interface, its components, menu system and content areas. I then create extra sketches for each section, as can be seen below.

This process may take several iterations before I’m happy with the plans, but, being a bit of a hoarder, I never throw anything away. This way, I can always refer to interface ideas and sketches I made years ago (though my office does tend to become a bit of a maelstrom of paper during my design phases). 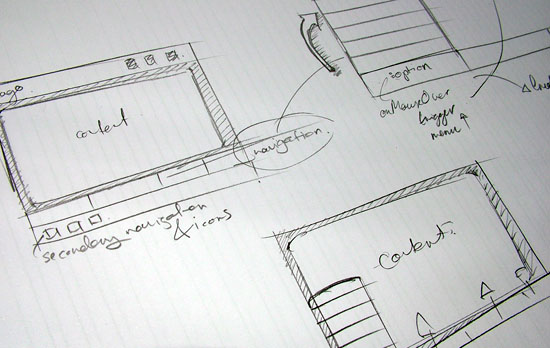 Once I’m happy with the initial layout, I move into a digital format — usually Fireworks or Illustrator — to create a compositional interface.

The concept of wireframing may already be familiar to many of you. You may already wireframe your designs subconsciously without realising it.

To put it simply, wireframing involves creating tangible skeleton structures that acts as placeholders for content. For example, if your design will hold a lot of text, you may need to consider a scrolling design rather than a paging design (in which content is held on different pages).

There are many points to consider during the creation of a layout for your designs. These issues are outside the scope of this article, but once you start to layout your designs in this manner, you’ll soon see what works and what doesn’t.

You can create your interfaces using any of the wide range of tools that are now available; I usually plump for Fireworks MX 2004. This program makes it easy to create interface prototypes, then resize and repurpose elements quickly using Flash’s vector tools. Everyone has their favourite application, but Fireworks MX 2004 really does make the creation of complex vector graphics a painless exercise.

Consider the following interface. While it may seem simple, it was created from a series of rounded rectangles that were aligned and joined using the Union tool (Modify > Combine Paths > Union). Standard vector and text tools were then used to create the composition as a usable interface. 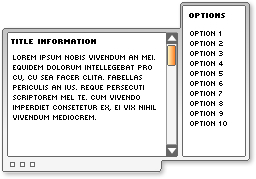 At first glance, it doesn’t appear complex, yet the creation of this type of interface using Flash’s standard tools would be a daunting task. Just look at the number of curves and control points that are present in this close-up of the design. 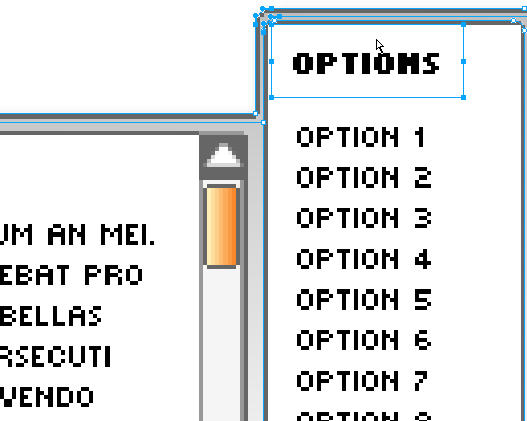 In the below design (source PNG files can be found in the code archive), I have create a series of simple rounded and non-rounded rectangular boxes. The content areas in which the logo, extra icons and main content areas are to be positioned are clearly noted, as are the main and sub-menu options.

Creating this design with a series of solid fills and simple strokes took about 15 minutes from start to finish and, because Fireworks MX 2004 makes it so easy to group interface components (such as each main menu), I could fine tune the attributes and positioning until I was happy with the final design. 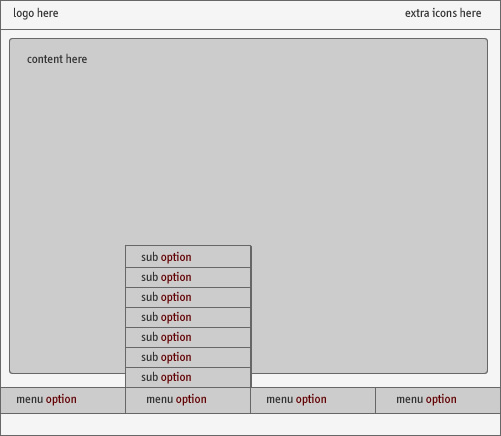 One of the beauties of the Macromedia range of products is their tight integration, and the integration between Flash and Fireworks is no exception.

From the initial concept (and using the relevant layer structure within Flash), I can copy and paste quickly between applications. Because the design was created in vector format (and provided no live effects, such as drop shadows or glows, are applied to the items), integrity is maintained between the applications, and vector format imagery is imported successfully into Flash. 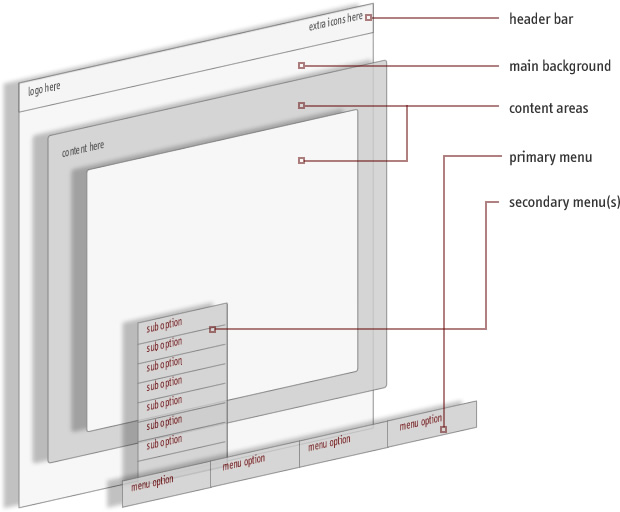 Depending upon how you work in Flash, the easiest way to create an interface rapidly is to import integral parts of the design as single components, arranging the items in separate layers within the stage. Not only does this make your design more scalable and easier to manage, it also gives you much more control over the position of each individual part of the interface relative to the others.

Note in the above diagram how the sections of the interface sit atop each other; this is called the stacking order of the layers. Those that appear at a lower point in the stacking order will essentially be hidden from view if a larger object is placed in a higher layer. This can be a useful concept â€“ you can use the layers to mask other layers without changing layer types or using complex masking techniques. This ability can allow you to create an interface rapidly.

Because Fireworks and Flash support layers, we can migrate content from Fireworks to Flash easily. By recreating the layers in Flash and placing the content into each subsequent layer, we can mirror the design we created in Fireworks with a minimum of fuss.

Take a look at this exploded view of the interface we saw above. 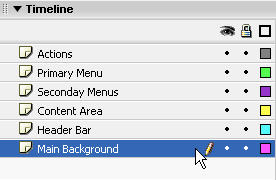 We can create these layers, from the top down, in Flash. We can then begin to import and lay out each element relative to the others.

The following diagram outlines the simple process flow. Once we’ve created the interface in Fireworks, we then create the layers to hold the structure in Flash. From this point, it’s simple to copy content from Fireworks and paste it into Flash.

Once the content is in Flash, we can fine-tune the attributes and position of the imported graphics. Once we’re satisfied with our work, we can go back to Fireworks and repeat the process until all the integral elements are in Flash.

Note that, when you’re importing directly from Fireworks to Flash, objects are imported as Movie Clips or bitmaps and are placed in a folder called ‘Fireworks Objects’. The naming of the imported objects leaves a little to be desired (‘Symbol 1’, ‘Symbol 2’ etc.), so, after you import each element, it’s a good idea to give the item a more descriptive name for the sake of scalability.

This procedure also makes the files more usable in the event that you return to the project at a later date.

We can name the instances of any of the clips we’ve added to the stage for manipulation via ActionScript. In the following example, after we name the movie clips in the Primary Menu and Secondary Menus layers, we simply add the ActionScript to the Actions layer, and away we go!

Note that, in the included example (contained in the article code archive), no control code is present for the sub-menu items; it’s provided for example only. 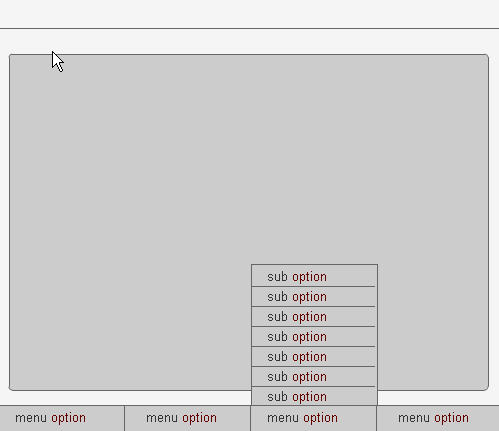 Effective Use of Gradients

Using Flash to create gradients for your interfaces can be a tiresome and long-winded process and, while Illustrator is good at some things, nothing is as suited to creating complex and easily controlled gradients as Fireworks MX 2004.

With Fireworks MX 2004, you can rapidly create compelling interface elements. The program offers a series of simple gradients, with different colors and opacities, which can be overlaid to create subtle effects. 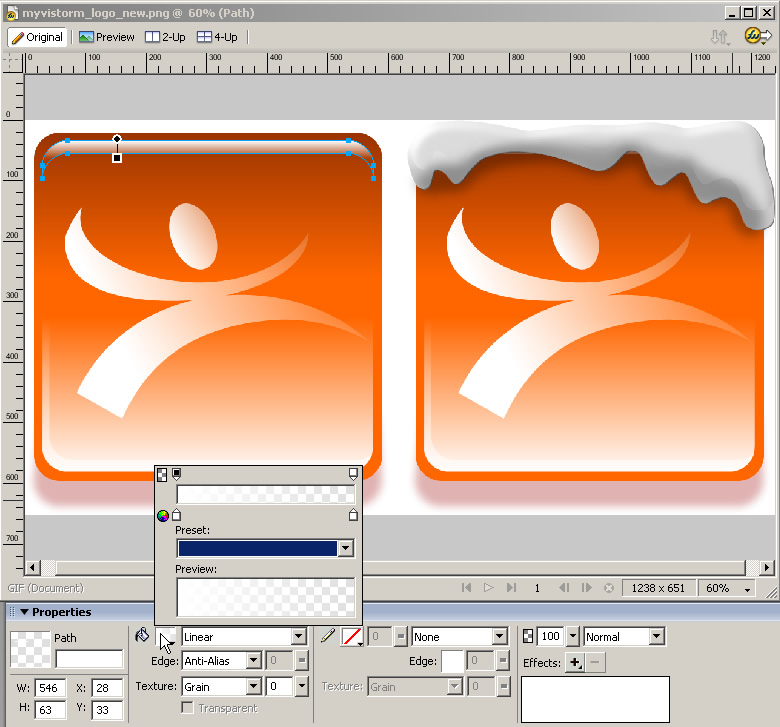 The difference between a design that works and one that doesn’t usually lies in its subtleties. Use subtle gradients as the fill type for vector paths fading from 100% opacity to 0% opacity and alter the drag handles for the gradient to produce very interesting and subtle effects.

Experimenting with the opacity markers for the gradient fill type, as well as the color and Blend mode, can help you achieve realistic effects, whatever the design.

If you import bitmap-based drop shadows into Flash, they can look grainy at best — dreadful at worst! While it may take a few minutes to create a vector-based alternative, the benefits far outweigh this extra investment in time.

The quickest way to create a vector drop shadow in Flash is to make a solid fill (e.g. black) duplicate of the shape to which you want to add a shadow, then place it on a layer beneath the original object 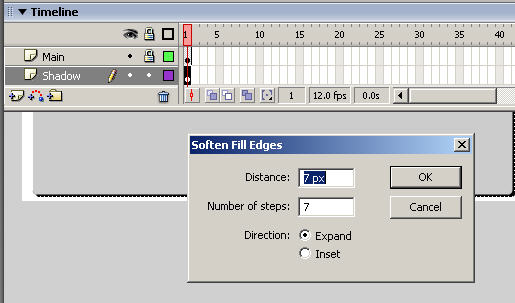 This produces a clean gradated shadow, instead of a hard solid vector line, but play around with the settings to create a look that suits your project.

Once you’re happy with the effect, select all the objects you’ve just created with the ‘Soften Fill Edges’ command. Group them together and convert the resulting group to a movie clip, altering the opacity of the clip to around 40% for a soft effect. 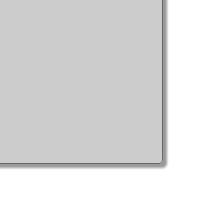 That’s it! While we’ve only scratched the surface of interface design in this article, hopefully it has given you a taster — and a few shortcuts for creating interfaces and getting objects into Flash. For more shortcuts and tips, look out for the next instalment!