There are no two ways about it: Flash MX 2004 is a powerful development environment for creating fun and engaging applications. Yet, there comes a time when you may need a little more control of system-related functions such as being able to detect the operating system the user is using, launching external programs, detecting default file handling applications and controlling system windows — especially when creating distributed applications.

When you are looking to create educational reference material, presentations, CD-ROMs or complicated applications, Flash will (depending on the complexity of the project) usually fulfil the needs of the brief. But there are times when Flash on its own just doesn’t cut the mustard, and needs a little more horsepower to accomplish the desired effect.

In this article, we’ll look at how, by integrating Flash and Director, we can query the operating system on which the application runs, return information and make decisions based on that data.
The information presented in this article should give you the inspiration to explore the possibilities of Flash and Director integration, and give you a taste of what you can achieve with a little imagination and flair. The article source files can be downloaded by clicking here.

You are building an application in Flash that needs to open several different file types (spreadsheets, PDFs, presentations, executables etc), but in order to make the application as smooth as possible, you need to check for the existence of applications that handle the types of files you are trying to open, and act accordingly.

Using Flash to check whether there is a registered file-handling application for a given file that you’re trying to open is, to my mind, extremely difficult — if not impossible — without third party or bespoke integration tools.

I was recently working on a project for a CD-ROM application, and decided to create the interface in Flash. There were several sections of the application that needed to open PDF files, and I included a link to the Adobe Acrobat Reader that was included on the CD-ROM. Everything was working fine, until the client decided to add features to the project, which included opening multiple document types.

Of course, this presented a new problem: I needed to know and inform the user of whether they had installed the application required to open the document they’d selected, and Flash just wasn’t up to the job on its own.

Rather than scrapping what I’d already written, I decided to investigate other methods by which I might retrieve this information, and found Director MX 2004 to be the prime candidate for the job.

How It Fits Together

The solution that I came up with was a meld of Flash and Director, where I used Flash to create the interface and act as the ‘stub’ to call functions within the Director application, which, in turn, was using an Xtra to perform a series of functions.

While I researched alternative methods for retrieving the information, I came across a Director Xtra called ‘Buddy API’, which contains over 140 functions for interfacing with the Windows API and Macintosh Toolbox.

This was the perfect Xtra for the job and, although it is a commercial Xtra, the unregistered free version includes two free functions. The Xtra contains many functions, some more useful than others. Click here for more details.

Luckily, I could use the unregistered version, as I only needed two functions from the Xtra:

Essentially, the Flash movie is embedded within a director application, and, rather than producing a Flash projector, we produce a Director Projector that interfaces with the operating system via the Director Xtra to check certain criteria, then carry out specific functions.

The flow of information from the Flash interface through Director projector for this example is outlined in the diagram below; while it’s simple, let’s take a quick look at the steps involved and how the two applications communicate. 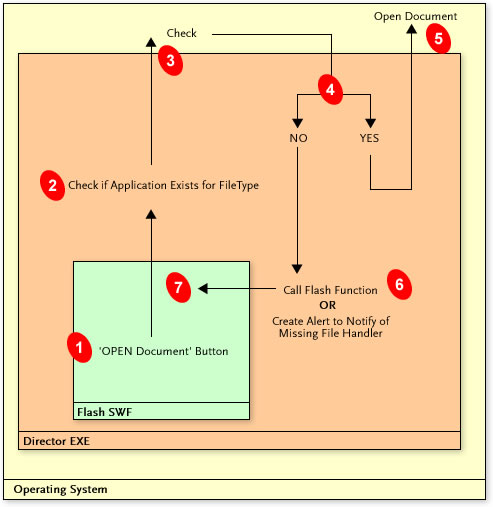 Step 1 In the embedded Flash interface, the user clicks a button (in the example shown below, it’s named openPDFDoco) which calls a defined function within the Director application in the following format:

Step 2 The parameters of the file (name, extension, type) are passed to the Director movie and a custom function is called, which checks via the Buddy API Xtra whether a file handler is present for the file we wish to open.

Step 3 The Buddy API Xtra checks to see if a file handler is present using the FindApp("file type") function and returns a true or false value to the Director Projector.

Step 4 Based upon whether a file handler is present, the file is opened using the OpenFile(filename, windowSize) function of Buddy API (step 5).

Step 5 The file handler is verified and the file is opened in the relevant application.

Step 6 If the File Handler is not found for the file we are trying to open, we can either trigger an alert within the Director projector to inform the user, or we can call a function in Flash.

Step 7 We call the function to be executed at a specific frame in Flash; this could be as simple as moving the playhead to a specific frame to inform the user of the missing application for the file they’re trying to open.

By planning the behavior and integration of both the Flash SWF and the Director Projector, we can have the best of both worlds — an easy-to-maintain application with a powerful interface that’s capable of many different tasks.

In the example shown below, I’ve implemented this methodology to create a distributable Director projector. This serves as an installer for an application — both as a Macromedia Extension Manager file (*.mxp) and as PDF documentation (*.pdf) — but the basic idea outlined here can be used for any number of different projects when you need expand the capabilities of Flash. 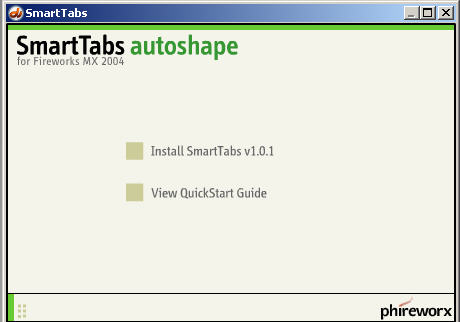 As with any development project that uses multiple sources of information, we need to establish a working directory structure that we can understand easily and use with the minimum of confusion; in this case, we’re using Flash FLA / SWF / .as files, as well as Director Movies / Projectors and PDFs.

Create a suitable working directory structure as shown below: 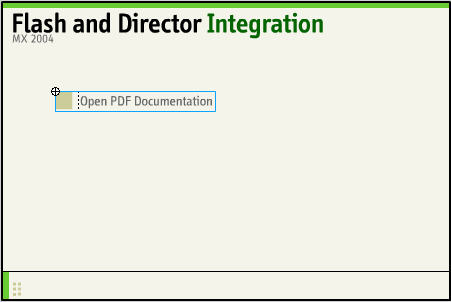 It’s simple, really, but, without the basic groundwork here, we could easily get in a mess later when we edit multiple files.

From the root folder for the application (‘Director Application’), we have two folders (‘Flash Files’ and ‘ISO’). The Flash Interface and relevant ActionScript files will reside in the ‘Flash Files’ folder. The ‘ISO’ folder contains the Director Movie and Projector files that we’ll create later, as well as the ‘Files’ folder, which will contain the asset files (PDFs) for the application.

You can make your Flash interface as complicated or as simple as you like; in this example, we’ll create a simple interface with a single button (just to keep things simple) that will launch the PDF opening process.

We’re all done for the first phase of setting up the Flash movie. At the moment, there’s no ActionScript to control the behavior of the button; we’ll add this later, once we’ve set up the Director project, imported the SWF, and set up the roundtrip environment.

Importing the Flash Interface into Director

Now that we’ve created the basic interface, we need to import it into Director and set up a few parameters.

You should now see the imported Flash movie within the internal cast window.

This now allows us easily to edit the Flash SWF file via the roundtrip methodology from within Director.

If you now double click the Flash Movie on the stage, it will automatically launch Flash for editing. When the file is open within Flash, clicking the ‘Done’ button at the top left of the timeline automatically updates the embedded SWF within Director.

This makes life a lot easier; making updates becomes seamless, and reduces the chance of Flash SWF edits being lost or overwritten.

In order to make full use of what we’re working to accomplish here, you’ll need to install the Buddy API 3.6 Director Xtra. This Xtra is downloadable here.

Once it’s downloaded, extract the contents of the .zip or .hqx file and copy the budapi.x32 file to your Director Xtras folder, which, in Windows and Macintosh, will look something like this:

If you were to try and publish your Director Projector now, things would look a little odd — the projector would successfully be created but, when you tried to load it, it would open for about a second, then close.

Why?…Well, there’s no Lingo or JavaScript code that has been added within Director. Although it may preview internally within Director without any problems, as soon as it’s exported into a projector, the playback head hits the last frame of the Flash movie and quits.

We need to start adding within Director the code to control this — a simple score script.

Note: If the Score window is not open make sure it is be selecting Window > Score. 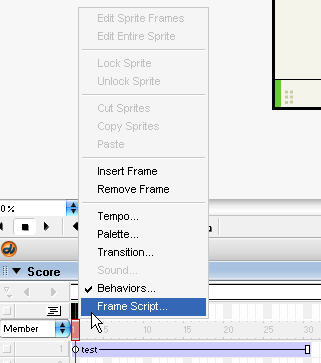 This script simply pauses the movie and gets rid of the annoying exiting behavior within the projector.

If you now preview your projector (File > Publish) you’ll see that the projector window stays open, and we can move on to add more of the control code.

Add the BuddyAPI Director Xtra to the Project

In order for the code to function correctly, we need to add the BuddyAPI 3.6 Xtra into the project; it will be included in the Director Projector when it’s published.

With the project open, select Modify > Movie > Xtras, and click ‘Add’. Locate the budapi.x32 file from the Xtras folder and click ‘OK’.

We can now insert the code to control the Xtra we just added.

Our next task is to add the control functions that allow us to accept incoming function requests from Flash and, believe it or not, it’s not as difficult as you might think.

We’re now going to add to positions 3 and 4, 2 further scripts that facilitate communication between Flash and Director.

What we are doing here is using the prepareMovie event handler to create a new instance of a script we’re about to add, called DMXDocHandlerClass.

Let’s examine the code to see what’s happening and how the function works.

First of all, we declare pDefaultDocDir to make it accessible later. This is the default location for the files, and can be referenced within the directory structure that we created earlier.

When the new instance of the script is created, we populate the value of pDefaultDocDir with the name of the directory in which the files are stored, in this case, ‘Files’.

We then have a new function, which accepts the following parameters: 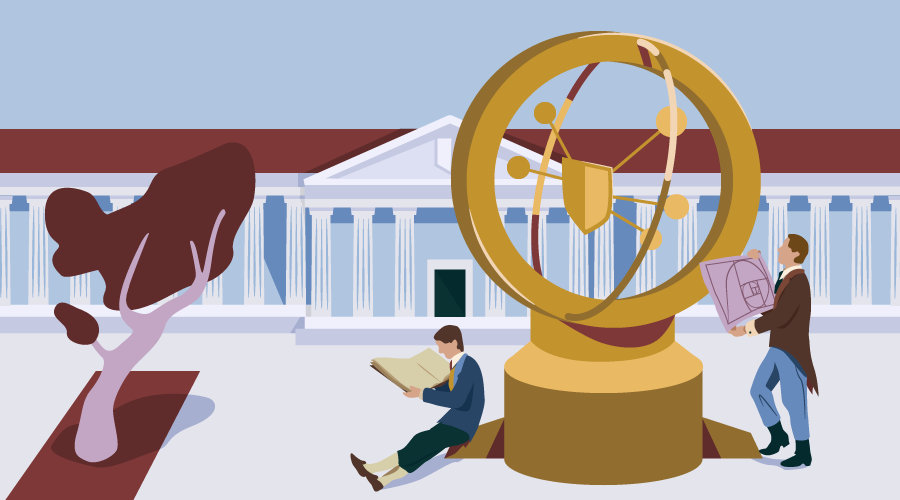 How to Integrate jQuery Plugins into an Ember ApplicationLamin Sanneh

How to Integrate Facebook Login into a Cordova Based AppNarayan Prusty