The latter definition is at the core of Open Source communities such as Mozilla. It was also initially the reason why Mozilla’s new mobile operating system Firefox OS was received so well. The idea of a mobile operating system fully based on web and open source technology was attractive to many. It motivated people to contribute to the project, support it and even switch from their iOS or Android smartphone to Firefox OS.

With it’s prime focus on the low end market and developing countries, Firefox OS is gaining a solid user base and is trying to break the Apple and Google mobile duopoly. The announcement of a $25 smartphone in several markets has helped gain further interest.

With the announcement of Firefox OS 2.0, a new chapter is set to be started, the first since the launch of the first Firefox OS smartphones, exactly 1 year ago.

Some of the new features announced for Firefox OS 2.0 are:

As an owner of a Firefox OS Developer Preview Phone, a Geeksphone Peak, I downloaded the latest Alpha Build of Firefox OS 2.0 and tested it on my device. If you want to experiment with it too, you can find the builds here.
I’m going to show you around the updated UI and some work in progress updates in Firefox OS 2.0. Obviously, everything shown is not final as the system build is updated every day, and a final update is due for release in late summer. 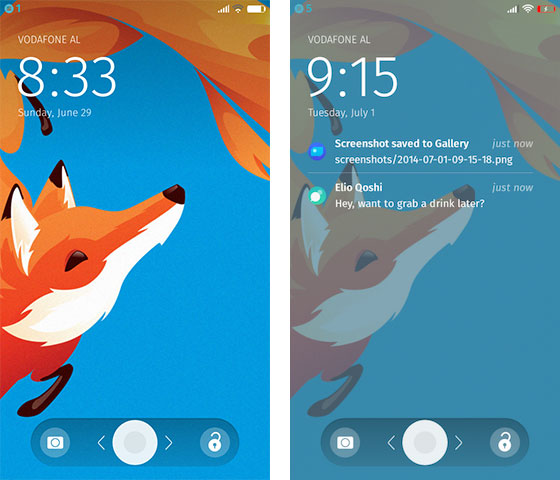 The first change you will notice is the updated lock screen. It is clear, uncluttered and attractively designed. The new two directional slide lock bar now lets you access the camera app directly without unlocking the screen. The screen lacks any visible borders, making the UI elements and UX more unified. Even the status bar has only a subtle gradient, refusing to keep a black solid border. Being able to see the notifications from the lock screen is unique in Firefox OS, a feature which Google recently introduced at I/O for Android L (a coincidence perhaps?).

Whereas in Android the application drawer and home screens are separate, they are in the same menu in Firefox OS. The application screens can currently be highly customized with icon alignment, organization and size easily modifiable on the fly by holding an app icon. These features provide fantastic functionality for those with accessibility requirements or just those with large fingers!

The notifications bar is still heavily inspired by Android, putting push notifications on top, data usage next, and quick access to settings at the bottom. However, in future updates the notification bar is set to be overhauled completely. It’s layout is set to change and users will be able to access it from sliding from the bottom upwards, instead from the top downwards.

The dial screen has been also revamped, with bigger buttons and a cleaner interface. The high contrast rich colors and buttons look slick and modern, yet warm, due to their round forms, an aspect which adds to the UI’s friendliness. 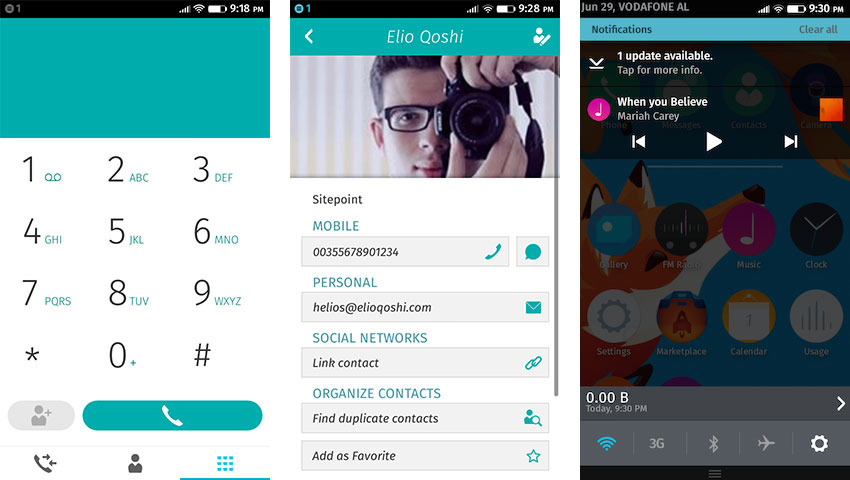 This friendliness is a characteristic which Firefox OS achieves well. Due to Mozilla’s community nature, a good portion of Firefox OS code and contributions are made by volunteers, a unique approach for a mobile OS. This generally only happens in true Open Source Communities (unlike Android), hence the big hope among enthusiasts, who want it to succeed.

Mozilla has set some serious goals for Firefox OS in 2014. Amongst them is to own 1% of the Mobile OS market share, which is a large goal, yet doable if everyone continues to pull together. You can find the Roadmap of Firefox OS here.

Firefox OS is definitely a game changer. Penetrating the market with a $25 smartphone could enable it to compete with the big boys Apple and Google. There is a lot yet to be improved in Firefox OS, but do you remember Android in its first 2 years? You don’t? Well, probably best. There is a long way for Firefox OS to go, but with such a large and enthusiastic community involved, it will definitely make a lasting impact.