Drupal 7 has been released today following three years of intensive development. Hundreds of developers have contributed to making Drupal easier and more powerful than ever.

Drupal is an open source Content Management System written in PHP. Yes, another one. However, Drupal was one of the first good CMSs and it became a popular blogging and social community platform following its launch in 2001. Many popular sites use it today including The White House, The Economist, The New York Observer, HowToDoThings.com and Linux Journal.

I’m sure many of you are thinking “I use WordPress and I’m very happy with it, thanks.” Many Drupal fans would argue that WordPress is underpowered, less scalable, and lacking in security and flexibility. WordPress fans may consider Drupal to be overly complex, more difficult to maintain and less user friendly.

Looking at installations alone, Drupal has undoubtedly been overshadowed by WordPress. However, Drupal 7 has addressed many of the criticisms and the team has worked hard to simplify the user experience. Of course, WordPress has also been updated and several Drupal-like features were introduced in version 3.

Ultimately, they’re both great systems and their feature sets are converging. Why not try both and pick the best one for the task at hand?

Let’s take a look under the hood…

Improved administration panels
The administrative interface has been overhauled to make it slicker and simpler. A new configurable shortcut bar provides quick access to the most important tasks: 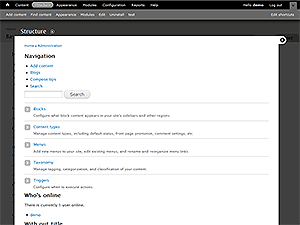 More flexible
Drupal 7 allows you to define your own content structure and add custom fields to pages, users, comments and other types of content. More than 800 modules are known to be compatible with the new version.

Speed and scalability
Drupal is fast and can handle huge amounts of traffic with better caching and improved JavaScript and CSS optimization.

It’s still open source
Drupal remains a capable CMS which can be downloaded, adapted and used by anyone for free.

The release of Drupal 7 will be celebrated around the globe on January 7, 2011. Head over to drupal7releaseparty.org and join the festivities (or is it too early in the year for more celebrations?!)

You can also monitor a stream of events on Twitter’s #d7rp and #d7rp_yourcity hashtags. Drunken photos are also likely to appear on the d7rp Flickr group.

Have you used Drupal 7? Do you like it? Is it an improvement? Do you prefer another CMS? Will you be doing anything to celebrate on January 7? Comments welcome…

The Drupal 8 version of EntityFieldQueryDaniel Sipos

Building a Drupal 8 Module – Config and the Service ContainerDaniel Sipos