More and more websites use gradients in one way or another. Some websites use them for navigation components, while others use them in elements like buttons, or with images to create some nice effects.

All browsers have had support for basic CSS linear and radial gradients for a long time now. The CSS Gradients: A Syntax Crash Course article on SitePoint gives you a quick summary of the syntax required to create linear and radial gradients, as well as how to use repeating gradients to create some basic patterns, which is great if you care about web performance and try to avoid using images whenever possible.

After linear and radial gradients, browsers are now slowly starting to support conic gradients, which were first championed by Lea Verou.

What are Conic Gradients?

Conic and radial gradients are similar in the sense that both of them start from a specified or default point as the center of the circle used to draw them. The difference between the two is that, in the case of radial gradients the color-stops are placed along the radial line, while in the case of conic gradients the color stops are placed along the circumference of the circle.

The following image shows a conic gradient that starts with a yellow color and ends with orange. 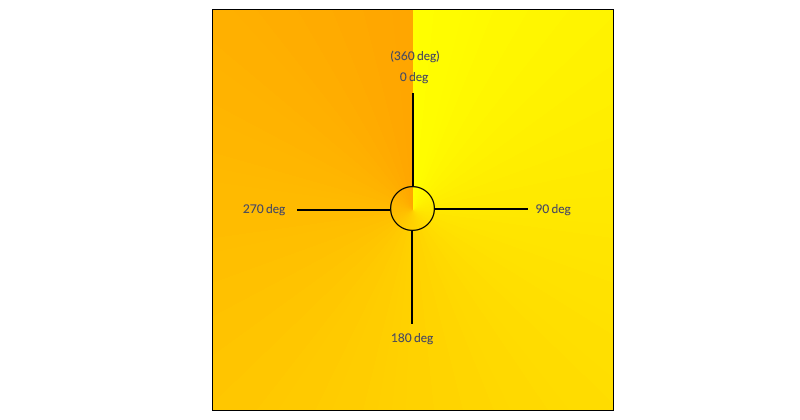 Conic gradients allow you to specify their starting angle as well as their central position. When these values are omitted, the angle defaults to zero and the position defaults to center. Here is the syntax for conic gradients:

The color-stop angle for the first and last color is assumed to be 0deg and 360deg respectively, if not specified. The yellow-orange conic gradient from the previous section could be created using any of the following versions:

Instead of using degrees, you could also use percentages. As I have mentioned earlier, a value of 100% is equal to 360deg. So a value of 50% will be equal to 180deg. If you know exactly what part of the circle you want to cover with a specific color, using percentages might be easier. Similarly, the center position of the conic gradient can also be specified in terms of percentages. Any of the above conic gradient values will produce the following result:

See the Pen Creating a Conic Gradient by SitePoint (@SitePoint) on CodePen.

Not all browsers support conic gradients at present, so I will be including a reference image with each example to show what the final result is supposed to look like.

Notice how I have set both the start and end color of the conic gradient to violet to avoid sudden transitions.

Another benefit of conic gradients is the ability to create pie charts with ease. The process for creating pie charts is actually very simple. All you have to do is provide some hard color-stop values for different colors. Each color of the gradient can be given a start and end angle. When the value of the start angle for the next color is less than or equal to the value of the end angle for the current color, they will display in a very sharp, instantaneous color change resulting in the formation of distinct sectors.

There are two ways for specifying these color-stop values. The first one is to always set the start angle for each color to zero.

What you finally decide to do is a matter of preference.

The following code snippet shows the conic gradient value for both these methods side by side for comparison:

Creating a donut chart is just a matter of applying an additional radial gradient on your element with hard color-stops. The inner color of the radial gradient can be set to white and the outer portion can be made transparent.

A repeating conic gradient accepts all the same values as a regular conic gradient. The only difference is that this time it will keep repeating itself until the whole 360 degrees have been covered. You can use this repetition to create some common image patterns that previously required the use of images.

You can easily modify the pie charts to create starburst-like backgrounds. All you have to do is use repeating-conic-gradients and reduce the width of each color segment by a suitable amount.

Similarly, you can create a checkerboard pattern with ease by setting the width of each sector to be 25% and setting the background-size.

The following image shows how extending a conic gradient with four 90 degree sectors over a rectangular or square area can create checkerboards: 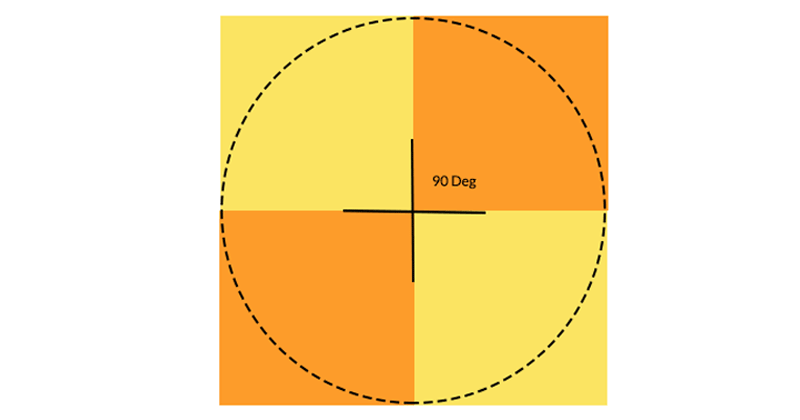 Here is the CSS to create a checkerboard pattern:

You can create many more patterns by varying the size of different sectors as well as changing the from angle for the gradients.

At the time of writing this article, conic gradients are supported in Chrome 59+ and Opera 46+ behind the “Experimental Web Platform Features” flag. No other browser supports this new standard, either by default or behind some flag. This means that you will have to wait a little before there is enough browsers support.

However, you can start using CSS conic gradients today with the help of an excellent CSS conic-gradient() polyfill created by Lea Verou. There is also a PostCSS Conic Gradient plugin that automatically adds a conic gradient fallback to your CSS files.

To learn more on conic gradients, don’t miss these resources:

Can you suggest any unique uses for conic gradients on the web? Let us know in the comments.