Control User Access to Classes and Methods with Rauth

Rauth is SitePoint’s access control package for either granting or restricting access to certain classes or methods, mainly by means of annotations. 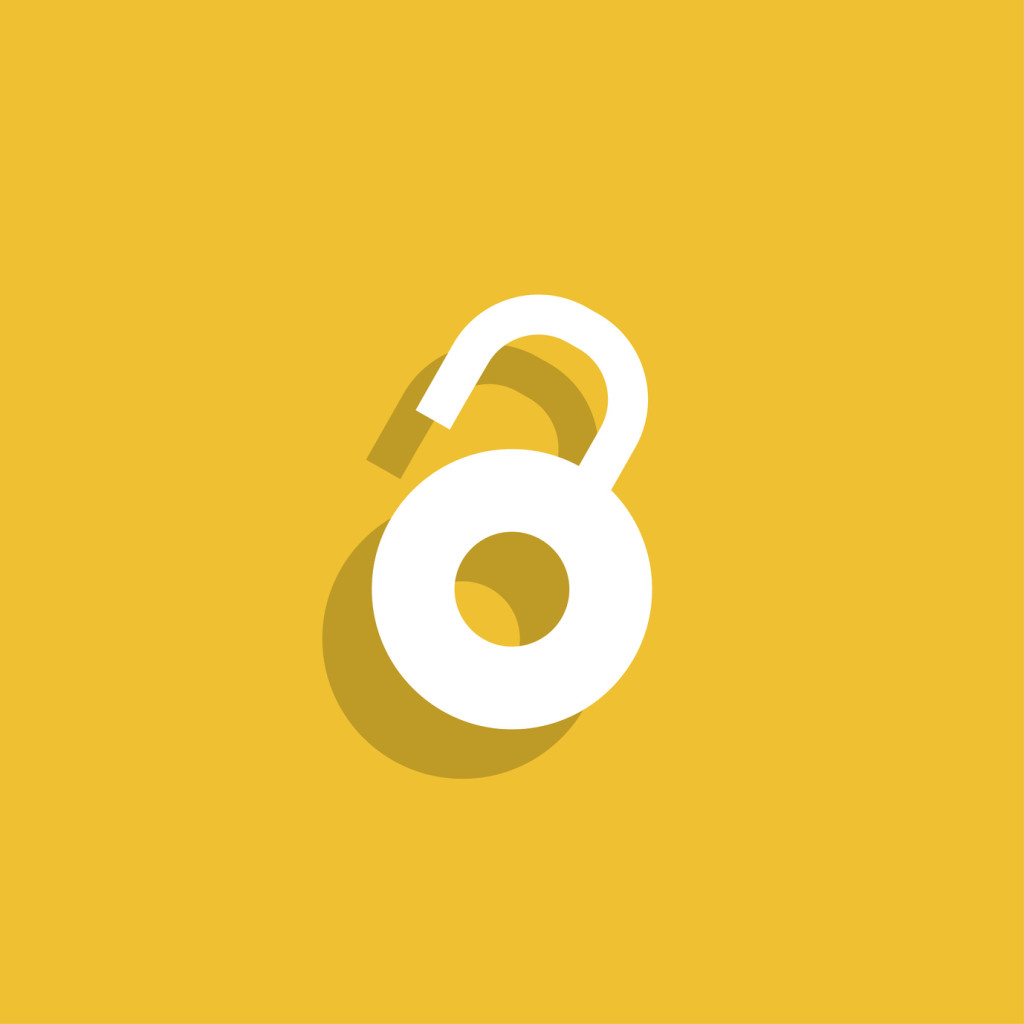 In this tutorial, we’ll learn how to use it.

Traditional access control layers (ACLs) only control routes – you set anything starting with /admin to be only accessible by admins, and so on. This is fine for most cases, but not when:

Rauth was developed to address this need. Naturally, it’ll also work really well alongside any other kind of ACL if its features are insufficient.

Somewhat “controversially”, Rauth defaults to using annotations to control access. No matter which camp you’re in regarding annotations in PHP, here’s why their use in Rauth’s case is nowhere near as wrong as some make it out to be:

If we now run this in the console with:

If we change the group of the $user array to banned, watch what happens:

In a nutshell, Rauth uses requirements (everything starting with @auth- in docblocks) and compares them to attributes (everything we define in the $user variable). It’s up to you how you’ll actually get to those attributes – maybe you’ll be using some kind of pre-made package like Gatekeeper, or you’ll roll your own authentication system, doesn’t matter. What matters is that Rauth gets the attributes in a format which is comparable to the requirements on the classes / methods.

A note on modes: If a user has a group attribute of “admin”, they can access all methods with @auth-groups admin. If the mode is set to @auth-mode OR (this is the default and can be omitted), then the user will be able to access methods with @auth-groups admin, users, banana, because they only need to have one of the groups defined. When the mode is AND (@auth-mode AND), they need to have ALL the groups. If the mode is NONE as in the banned() method, then the user MUST NOT have ANY of the groups.

Remember, auth- can be anything – doesn’t have to be groups. You can use completely arbitrary values like @auth-banana ripe and then a user with 'banana' => 'ripe' in their attributes will be able to access the class/method.

The above example was a rudimentary demo of the authorization flow. Let us now set up a situation in which a route is resolved, a controller is auto-invoked by a dependency injection container, and an authorization check is made automatically. In other words, a best practice approach for starting a new app – one nofw – the no-framework framework – is based on.

Let’s also make a Controllers folder, and put two controllers in there:

We’ll also need to configure the autoloader to load these controllers:

And regenerate the autoload files with:

The next step is to configure the routes and the dependency injection container, as per PHP-DI documentation. Our index.php file should be modified to look like this:

First, we make a new, empty container. Then, we define some routes (this would usually go into an external file like routes.php). We add these routes to the dispatcher, so it knows what to do with them, and finally we extract a triggered route’s elements and trigger the appropriate controller. Simple enough, right?

Now, the routes should work: 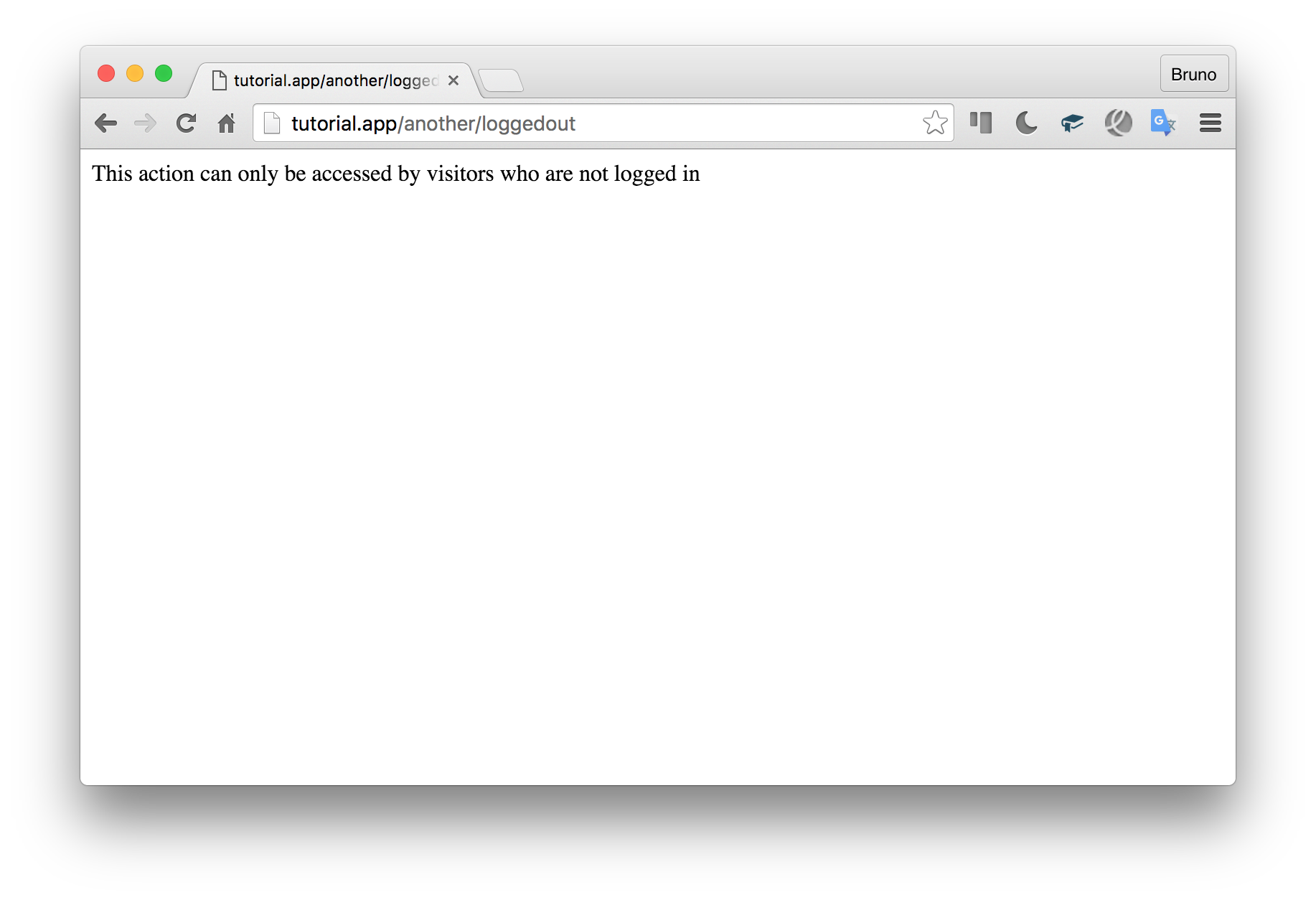 Time to add the Rauth layer to actually limit access to some of those routes.

First, we’ll add a User definition to the container:

Usually this would have some kind of logic, like checking the database for the user’s groups. For the purposes of this tutorial, hardcoding it is enough due to actual user management being outside the scope of this piece.

Then, in the FOUND case below, we’ll instantiate the Rauth class, and build an array of attributes to feed it when it’s time to do the authorize check. Notice that we’re defaulting to an empty groups array if the user hasn’t been defined (i.e. they’re logged out).

Since Rauth throws an AuthException when the authorize call fails, let’s wrap the whole thing into a try/catch block, too.

If we access the another/loggedout route now with the default hardcoded user from before, it should fail because we have the users group on that user: 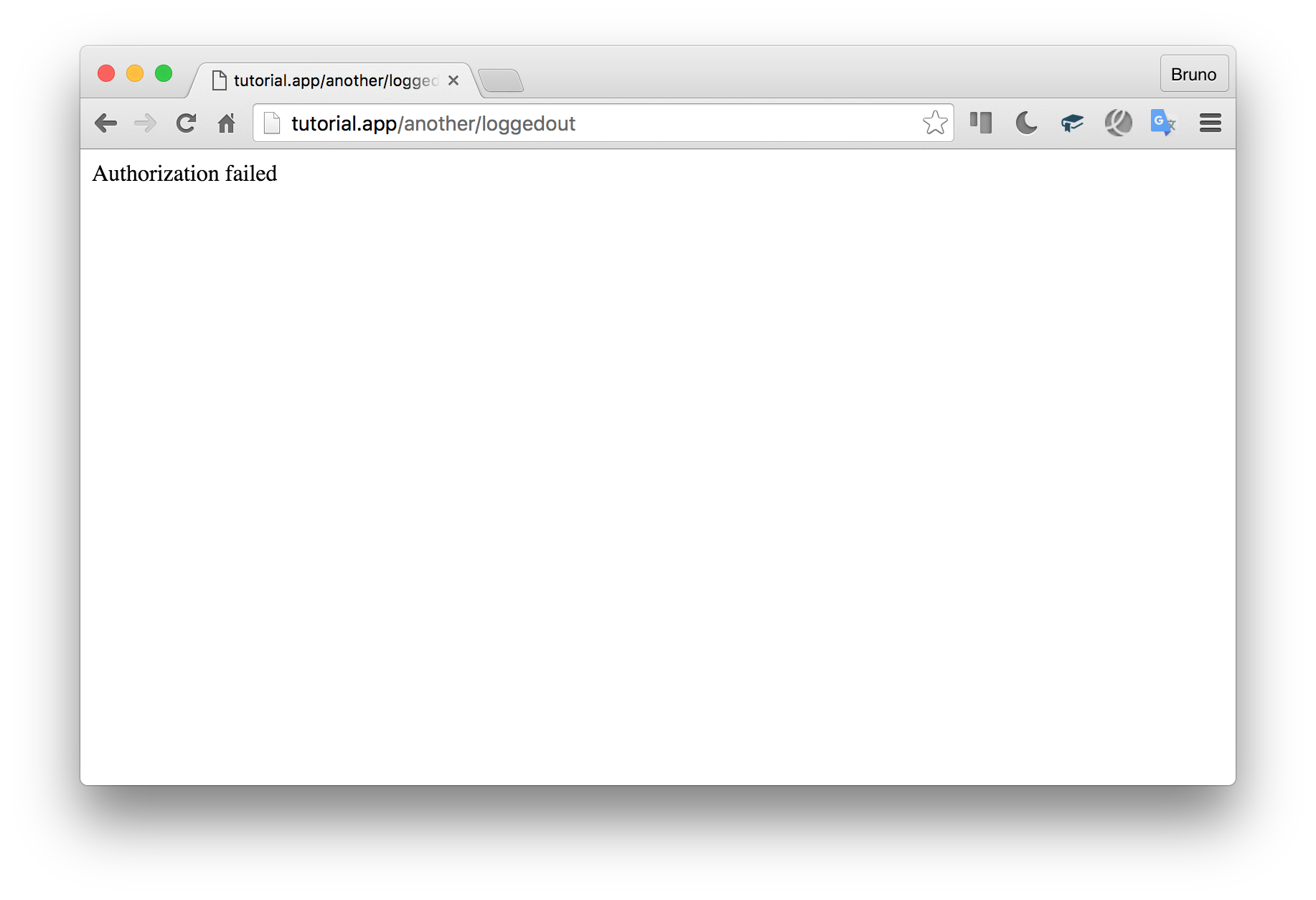 While the another/loggedin group will succeed: 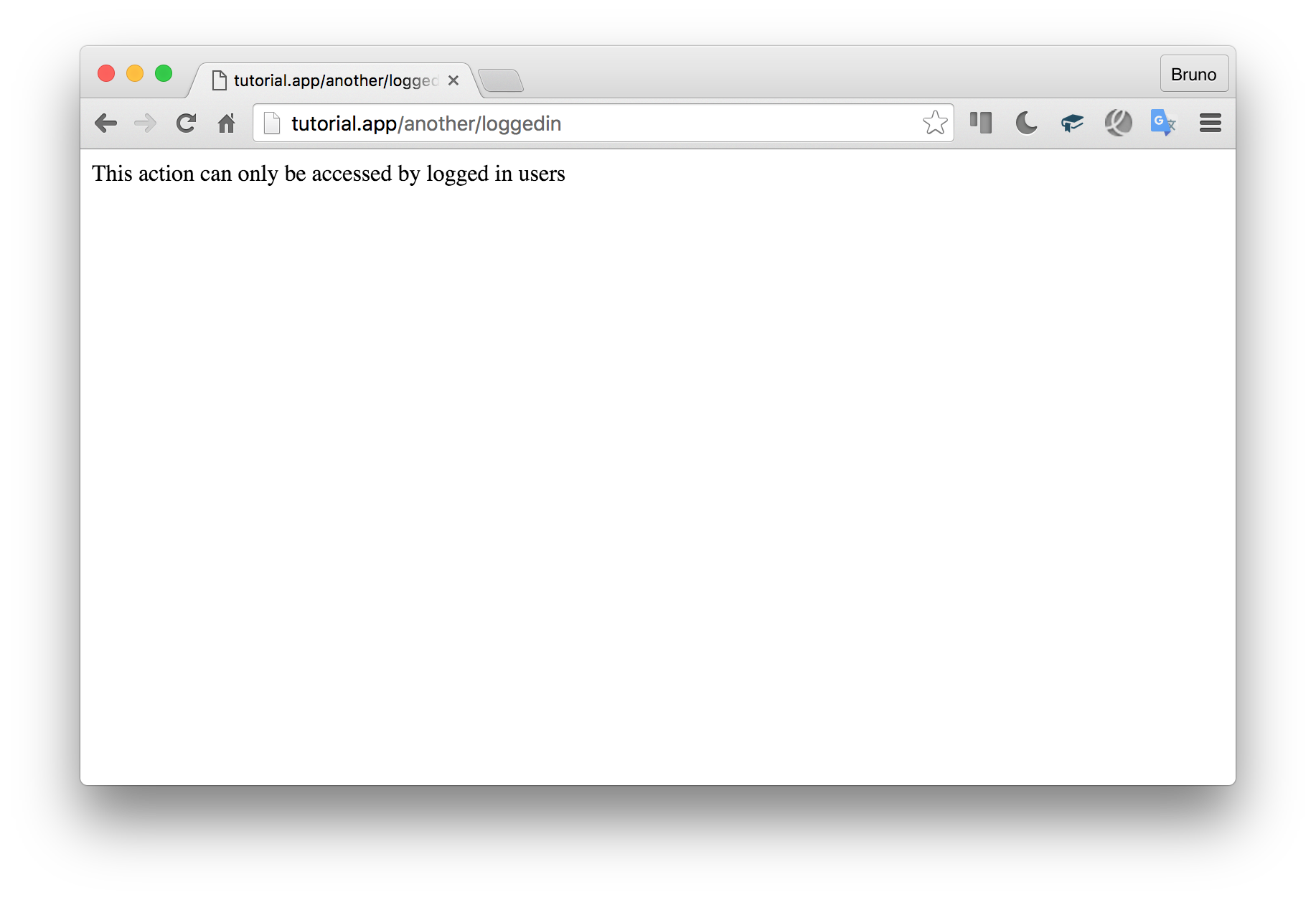 Of course, while in development, you might want some more verbose error messages. For that, each AuthException has a type and contains some Reason objects. The type will be something like “none” if the mode was set to “NONE”, of “ban” if the failure happened due to a ban (there is a difference – see next section), etc. Reasons will each have their own failure groups (not to be confused with the arbitrarily named “group” attribute), and a list of all entities in that group it has vs. expects. Perhaps this is best explained on an example. We can replace the die() call above with:

You’d want this in a flash message or in a pretty error view in a normal app, but echoing it out like this is fine in this tutorial. This block results in an output like this if we try the loggedout route again: 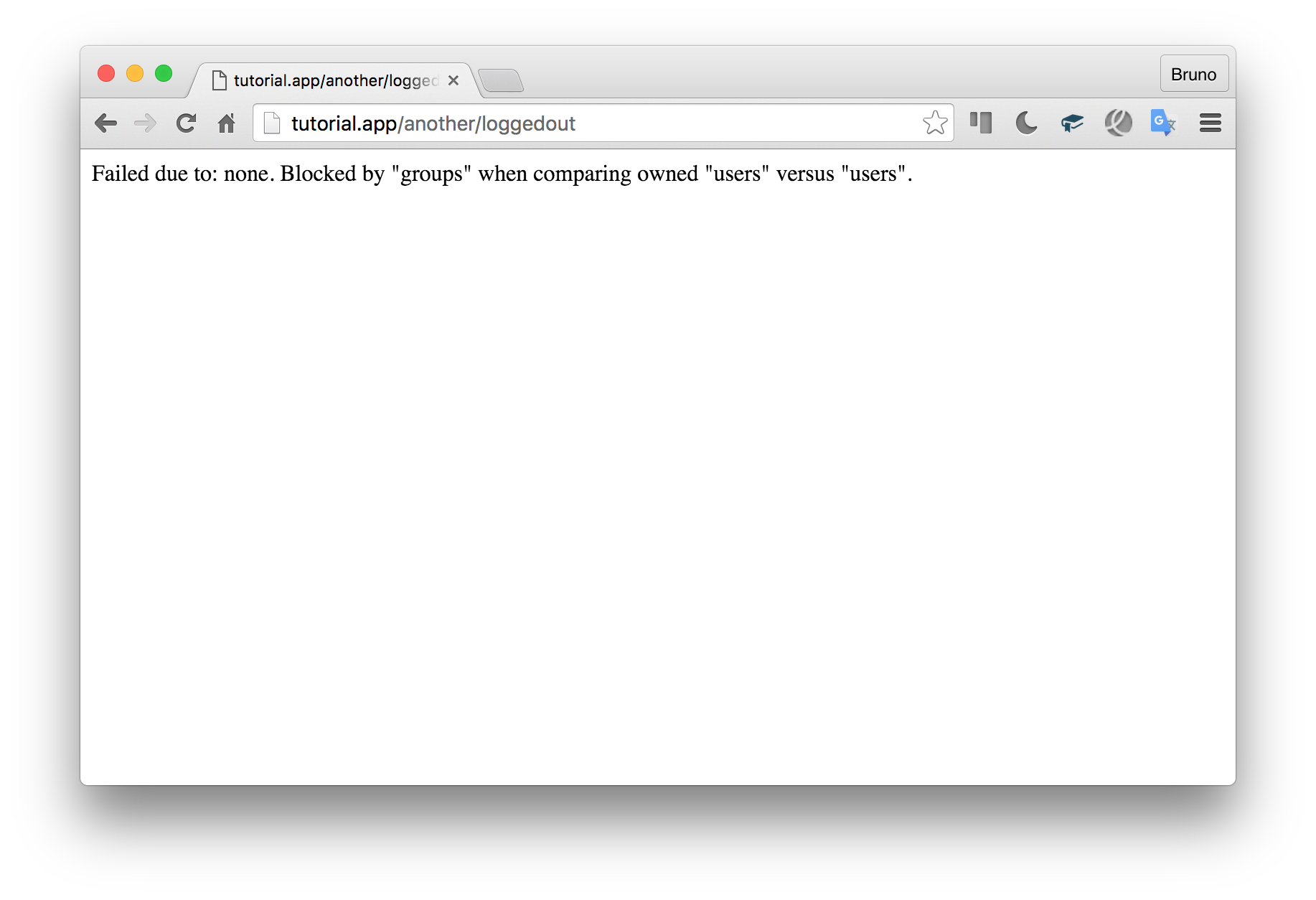 Feel free to change some of the hardcoded groups on the user array, and to alter the annotations on the classes to test some routes out further. Check out the AND vs OR mode, too.

One last thing we failed to mention so far: bans. Rauth has an additional pre-check called for banned entities, and this precedes all others. If a ban is met, then the authorization fails, no matter how many other things match up. For example:

The above will block access to the class or method if the user has the banned group, regardless of whether or not they also have users or admin. Like other attributes, ban collections can be arbitrary:

Tag a user with banana and they can’t get in, no matter the rest of the attributes on them.

Ban checks happen BEFORE any other check, so if you just need to block access to some classes or methods based on some attributes, bans will be the most efficient approach. Bans have their own type in the exception: 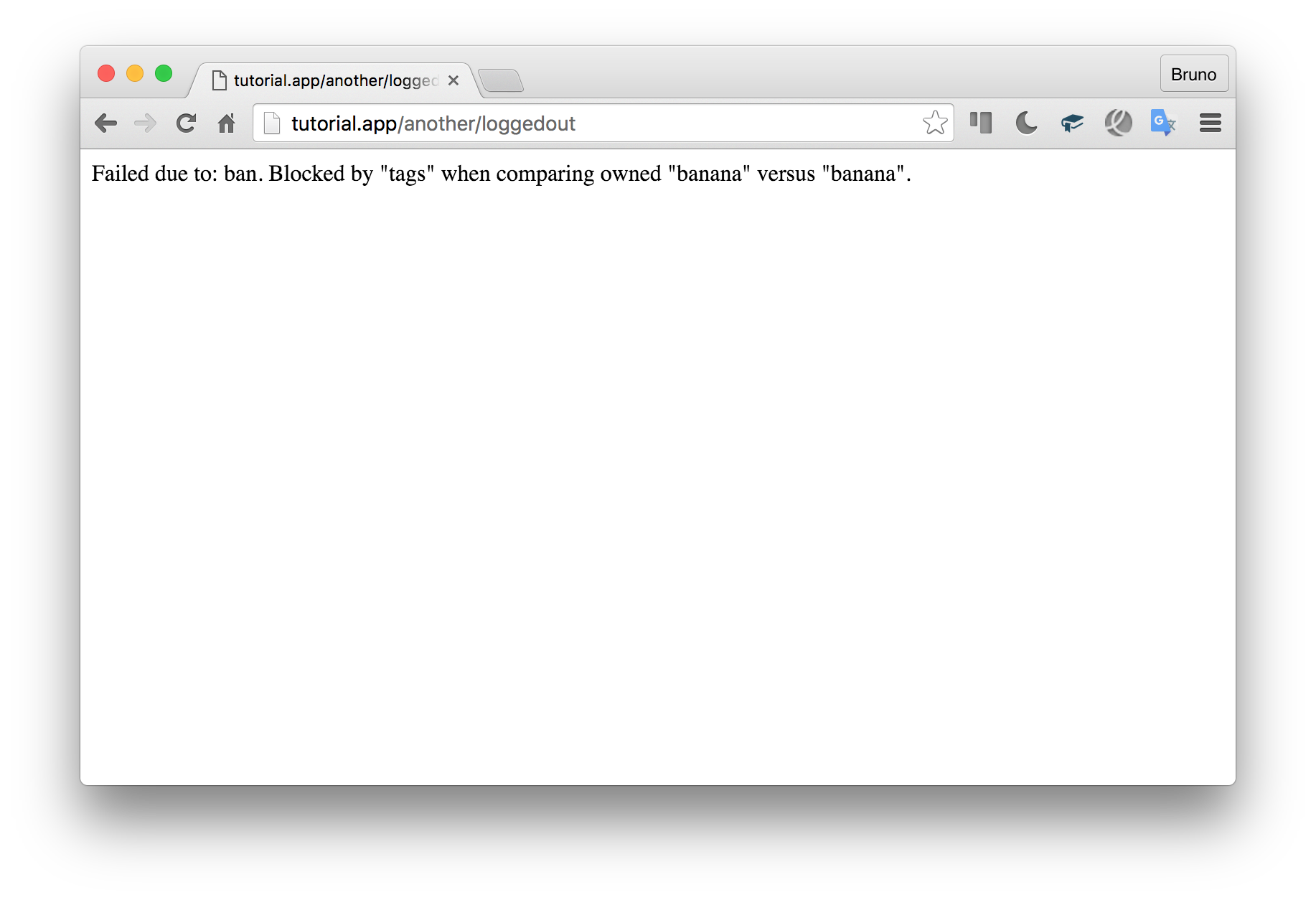 We took a look at Rauth, SitePoint’s package for controlling access to classes and methods. We implemented it in two simple demos, and showed how easy to use it is.

As Rauth is a SitePoint Open Source effort, we’re actively looking for contributors or just feedback on some of the open issues – we’re determined to make our packages worthy of production use, and we need your help to do so.

Did you give Rauth a shot yet? Would you? Let us know in the comments!