It would be fair to say that the first wave of women's wearables had a shaky start with products that showed promise but failed to create a retail revolution. There's been no shortage of glowing and glittering bespoke gowns and garments that have gained media interest to languish in museums and galleries as prototypes never reproduced in a ready to wear line.

I feel there's been a move from products designed for men with women as an afterthought, to women-centric designs and developments, many created by women, for women. Now wearables for women have the potential to resonate with a growing consumer market and this article looks at the recent wave of devices, encouraged by progress in electronic textiles and mobile technology.

Women's Wearables Are Not New

Students and academics like Maggie Orth have been making and creating in the quiet bubbles of research institutes and university departments. Women like Leah Buechley (inventor of the Lily Pad Arduino) have been instrumental in bringing wearable designs and techniques into homes and workshops. Writers on sites such as Instructables.com and Makezine.com have been providing new tools to the modern day designers' toolkits.

Efforts so far to engage women through mainstream wearables market have received scathing criticism, particularly when it comes to early smart watches. Developers haven't understood basics like varying sizes to suit the female anatomy and not realizing that a lack of pockets is not a woman's main motivation to buy a wearable. A common complaint from women was that watch faces and bands were too large for female wrists and hands and it was clear that the female market came secondary to that of men.

Women Know What They Want and Need

Tech websites sometimes give the impression that wearables are limited to exercise and monitoring wearables like Fitbit and Jawbone. With Fitbit announcing a collaboration with designers Tory Burch, Swarovski working with Misfit Shine and high end wearables like watches for privileged consumers, Wired named 2015 'the year wearables will stop being so ugly'. With exceptions, the needs of women as health consumers are less prominent in medical and health wearables.

For example, Apple’s HealthKit was criticized for tracking metrics like copper intake and selenium (niche interests) yet not offering women's reproductive health monitoring at launch. This omission (which Fitbit and MyFitnessPal are also guilty of) is at their peril as consumers complained and female developers have filled the gap by creating successful alternatives.

One example is Yono, aimed at women trying to get pregnant. It's a wearable in-ear thermometer that captures core body temperature and records them to a phone app.

It's worth noting that 8 of the top 25 health apps in the US App Store are fertility and period-tracking apps. 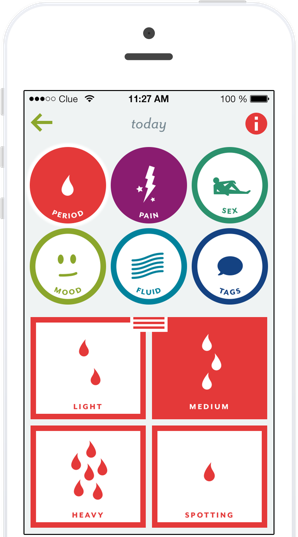 As a sign of progress, iOS 9 and updates to HealthKit includes reproductive health tracking. One Berlin-based startup already working on an app to take advantage of these features is Clue, founded by Ida Tin.

Not All Women Are the Same, the Wearables Market Must Know Their Audience

The fashion component of wearables cannot be overlooked as it's the key that will bring wearables to mass market consumers. By appealing to distinct segments of the market, designers are able to capture a receptive audience.

Metaverse Makeovers is a Shanghai-based company that has brought new communication methods to young women in China through press-on design nails that augment reality to create animations with a corresponding smartphone app. Virtual reality nail art allows beauty fans to create holograms on their finger nails. The set of press-on nails creates 3D holographic designs when fingertips are scanned with a mobile app, which can then be shared on social media.

Director Thea Baumann says nail bars and beauty salons are spaces where young women of the new digital age already congregate. While having their nails worked on, customers are using social media and playing games on their phones.

She notes that young women already create their own languages through social media platforms, many of which would not exist without groups of young women.

The nails retail for around $30USD and their creations are marketed through nail bar franchises, fashion stores, nightclubs and pop up events (e.g. pop up nail bars connected to giant immersive screens). Baumann and her team are based in Melbourne, Shanghai and Singapore and are working on a garment collection, makeup and accessories to work with their app. Their next plan is enabling users to create their own designs and messages.

ElektroCouture is a Berlin-based fashion technology house creating bespoke, ready-to-wear technology for the fashion industry. Founder and CEO Lisa Lang is a mentor to European hardware startups and a strong advocate for the Berlin technology ecosystem. She was named one of the top 100 most influential people in wearable tech worldwide.

I visited Lisa at her office in Fab Lab, an open digital fabrication studio which includes 3D printers, laser cutters and CNC Routers. Lisa was recovering from Berlin Fashion Week and preparing for bespoke piece, 'Lucie in the sky with diamonds' a glorious dress with LEDs (serving as a lamp when not in use) for loaned to an opera singer.

ElektroCouture has begun retailing their designs through ASOS making them the first fashion technology company worldwide to sell products on a retail site. ElektroCouture's designs are boldly tailored pieces, targeted at an older female audience, a cohort sometimes excluded from fashion.

Our audience is power women, women who are looking for high end bespoke pieces, such as board executives and senior managers.

Lang notes that for women, especially in male dominated industries, getting dressed is like putting on armor:

Fashion makes you feel stronger. I am a woman in tech. I want to express my geekiness but I'm a leader, I don't want to look like a circus pony.

My favorite piece is "A Spark of Ada", a scarf dedicated to Ada Lovelace, the first female programmer. The black and white scarf is bordered by a thin lighting strip that emits a bright and vivid glow. It's controlled by the owner through on and off switches located in the corners of the scarf and lasts up to 6 hours before charging. Lang believes that there's nothing new in fashion, it's ready to be disrupted.

We are part of that disruption.

Women's wearables sit at a place where creative ideas intersect with technology. But designers are at risk of allowing artistic expression to supersede the realities of the retail market (such as manufacturing, mass production, transport, seasonal cycles and pricing). The costume and theatrical components of wearables are inspiring, yet it would be problematic to see fashion orientated wearable limited to these elements. Here's some creators that I think are getting it right. I'm not very interested in beauty products, but in line with my Australian childhood, I need good sun protection and sunscreen. June by Netatmo is a personalized sun exposure tracker in a bracelet that measures sun exposure through UVA and UVB sensors. It's combined with a phone app that assess your UV exposure, with notifications sent to your phone telling you when it's time to apply SPF, what level of SPF to use and when you've had too much sun. It's not perfect according to this review, especially in situations without direct contact with the sun, but the idea has merit. 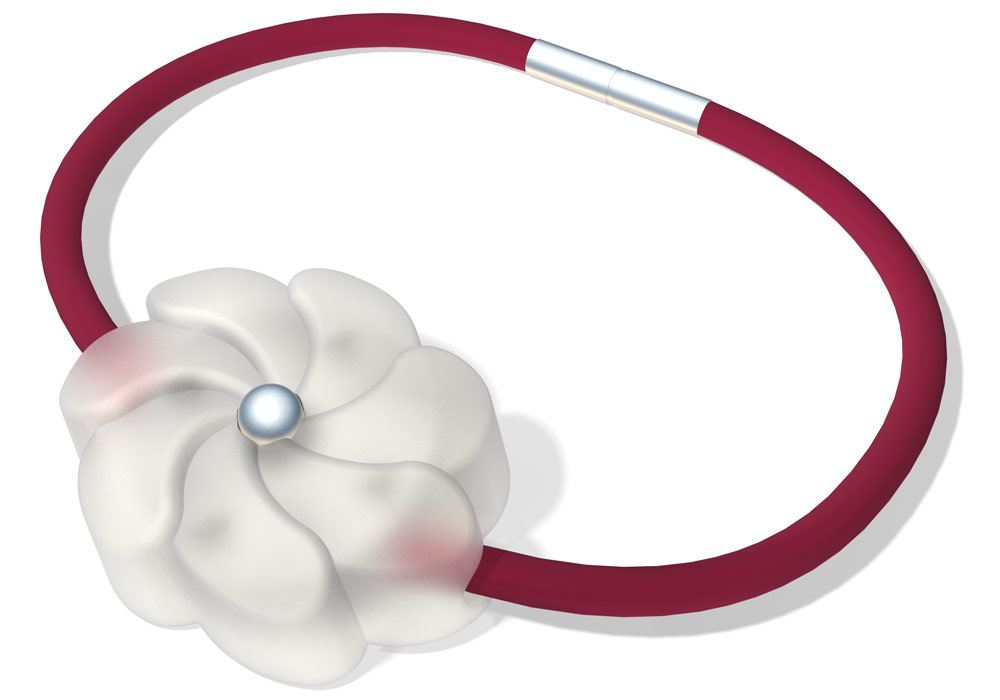 Created by Sara Chipps, Co-founder of the national non-profit Girl Develop It! and fashion-tech entrepreneur Brooke Moreland, Jewelbots are programmable friendship bracelets that teach girls the basics of coding.

Using the Jewelbots app, a girl can assign a friend one of eight different colors. When the friend is near, both of their charms light up the assigned color. They can assign other friends to other colors and if they're hanging out in a group, all their Jewelbots bangles turn into pulsing rainbow flairs.

The charm doubles as a button which can send haptic messages to friends in a particular color group. Girls can plug in their charm and use its Arduino software extend the functionality of their charms. In their recent crowdfunding campaign Jewelbots were offering two charm bracelets for $60, making the price accessible to a young audience. You can find the open source STL design files of earlier charm designs on github. 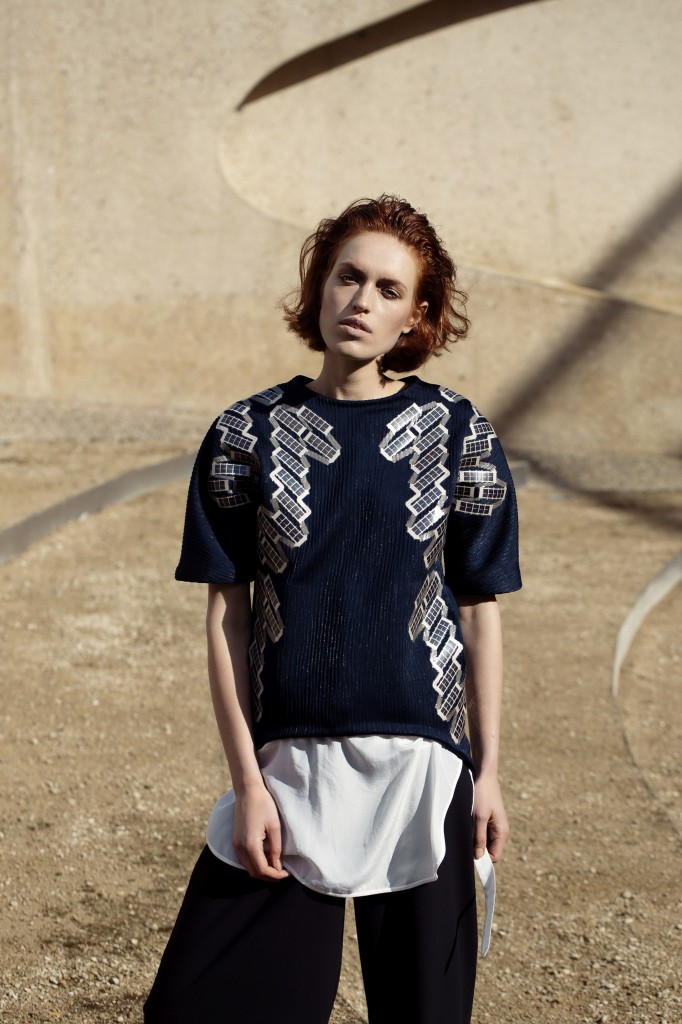 Fashion designer Pauline von Dongen has released a line of clothing including t-shirts and dresses that harness the power of the sun to charge small gadgets like mobile phones, MP3 players and cameras. Other lines include light-emitting night time clothing and a knitted cardigan with integrated stretch sensors that monitors the movements of the upper body during rehabilitation for geriatric patients and their health providers.

Women's Wearables are media friendly, at the forefront of R&D and instrumental in linking two seemingly disparate sectors – fashion and technology. This is an area where innovation and commerce are likely to explode. Both London fashion week and New York fashion week designers featured wearables this year. The use of prototypes by some designers is at odds with other designers efforts to ensure that consumers could watch shows live and buy products straight from the catwalk as they view them. It would be beneficial for second wave wearables to consider the mistakes of the past.

I could have spent hours discussing the innovations in wearables designed by and for women. I'd encourage you to check out those detailed here. Does it capture your interest? I'd love to hear your thoughts and my next article will discuss the things to consider if you are interesting in becoming part of the wearables for women wave.

Are Wearables in the Workplace Just a Tool for Surveillance?Cate Lawrence