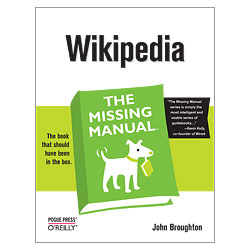 Wiki-based books are nothing new to Wikipedia — their open textbook site Wikibooks has over 34,000 pages in the English language version alone. But it’s not every day that a traditional publisher takes a previously printed book and puts it on Wikipedia for anyone to edit. Computer reference book publisher O’Reilly did just that this week, however. Appropriately, the title they put online in wiki form is Wikipedia: The Missing Manual, a book about Wikipedia.

The entire contents of the book by John Broughton, a Wikipedia power user with over 20,000 edits to his credit, have been put online in the Wikipedia help section. Anyone is now free to edit, correct, or contribute to the book, which is licensed under the GNU Free Documentation License — meaning anyone can also redistribute the book, including reprinting and selling it.

“What makes this project different than any of the other zillion books online today is the format we’ve chosen — a wiki,” said the managing editor of the Missing Manuals series, Peter Meyers. “Book viewers will be able to do all the same things they do on any other wiki: view the document, edit it, add to it — in short, whatever they want.”

Future print editions of the book may incorporate user contributions made via the Wikipedia page, said Meyers.

According to a press release, it was Broughton’s idea to put the book, which was initially published 12 months ago, on Wikipedia. The hope is that putting the book online and opening up the editorial process to anyone who wants to contribute, will encourage users to “curate” the book. Meyers hopes users will keep it up to date “by adding tips, tricks, and by updating the material to reflect changes to Wikipedia since we’ve published the original edition.”

Putting the Wikipedia book online for anyone to edit is possibly a stroke of genius. On the one hand, there is a potential that releasing the book for free download could cannibalize the print sales of the book. However, I’m going to guess that a book about Wikipedia editing probably didn’t sell many copies in the first place, and further, we’ve been seeing more and more often that giving away content for free can actually increase sales of that content later.

Also, by putting the book on Wikipedia, O’Reilly and Broughton are essentially “eating their own dogfood,” and tapping into their most useful resource: the passionate Wikipedia users who care most about the book’s topic. It seems very likely that the second edition of this book will be a lot better because of the open ended contributions of other Wikipedia power users. Putting the book on Wikipedia will also likely increase the title’s visibility among its core consumer audience.

Anyone who wants to read or contribute to the book should check out the Wikipedia: The Missing Manual page in the Wikipedia help section.