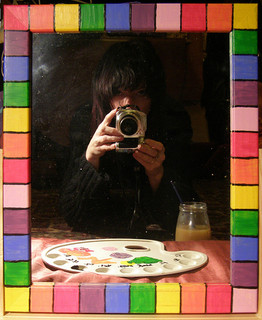 For many designers, Photoshop is the only graphics program that will ever cut it. But while Photoshop unquestionably offers a lot, it’s by no means the only software capable of getting the job done.

Most of you have heard about GIMP (or maybe even use it) as a Photoshop alternative. There are at least a dozen more desktop alternatives for Windows, Mac, or Linux.

But today, I want to talk about growing band of increasingly impressive web-based, OS-independent Photoshop alternatives. I do need to state that these programs are not complete replacements for all Photoshop functionality.

So, if they aren’t a complete replacement, why bother?

Firstly, if you examine your workflows, you’ll likely find that you use the same 5% of functions 95% of the time.

Cut, paste, crop, layers, text tool, opacity, color adjustments, masks and lasso selections probably covers off a large percentage of what you do.

Secondly, if you’re like many of us, you probably operate two, three or even possibly more computers, both at home and at work. Inevitably, some are older and less powerful units.

Installing a fully-fledged, resource-intensive graphics apps on each machine may be neither smart, nor even possible — either from a financial or performance perspective.

Thirdly, if we’re already storing and sharing our files across the cloud (Dropbox, Google Drive, etc), it makes a lot of sense to share functionality the same way. For many tasks, our browser can effectively become our new desktop.

In this article, I’ll review a handful of the best browser-based graphics alternatives for doing just that.

Pixlr is a genuine GIMP, and arguably, even Photoshop competitor. It’s fast, free, and really offers a lot. You can use it to edit your existing images or create image from scratch. 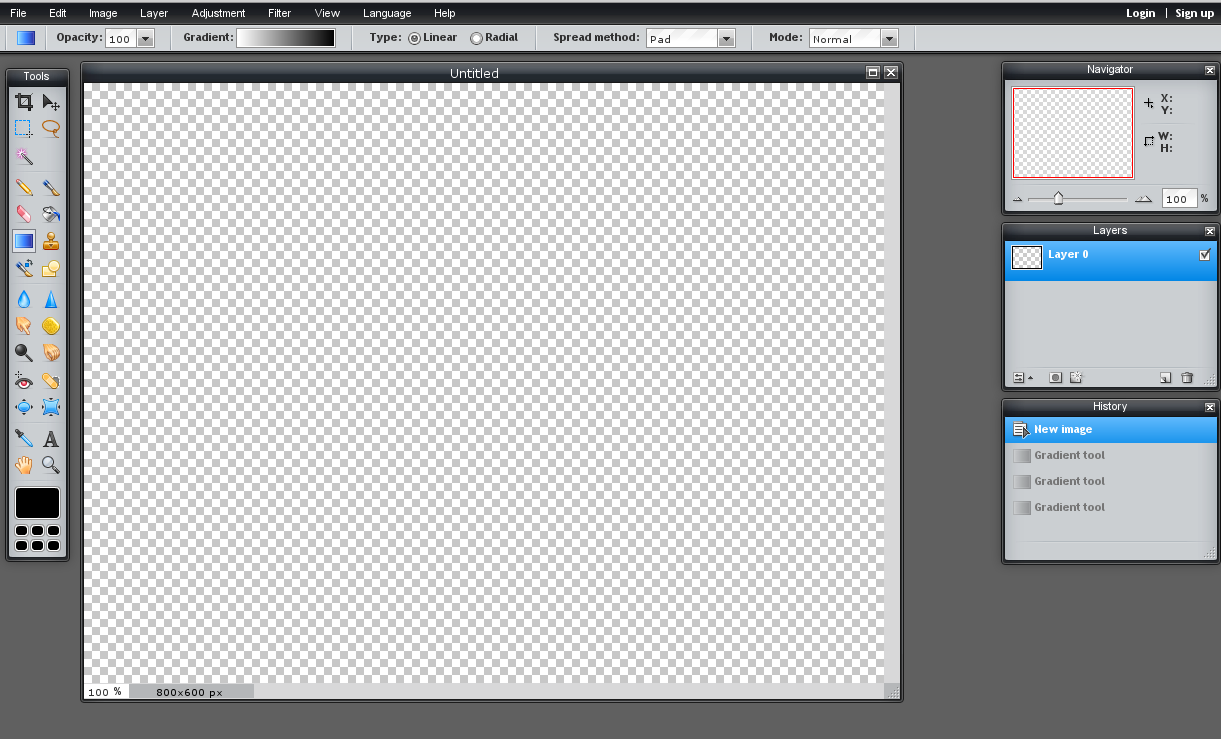 When you create a new image, you can choose from preset image sizes (some of which are the standard banner sizes) but you can’t set the resolution. Pixlr supports JPG, PNG, BMP, TIFF, and PXD (their own layered format).

The size, resolution, and format limitations are not that much of an issue, if you work with Web graphics. I repeat, Pixlr is not meant as a Photoshop replacement. It is good enough to create a banner or a Web image but definitely not an option for print.

Pixlr interface looks familiar because it is similar to the interface of a desktop graphics program – with menus at the top, a toolbox on the right, and floating windows on the left.

In the toolbox you will find tools that are present in any desktop graphics program. The tools are not an exact match of the tools in Photoshop or GIMP but you have what you need.

Pixlr has quite a lot of options for work with layers, for image adjustment, and filters. Again, these are not necessarily an exact match of what you will find in Photoshop or GIMP. Two other points that need mentioning are that the interface of Pixlr comes in multiple languages, and it even has a mobile version as well. 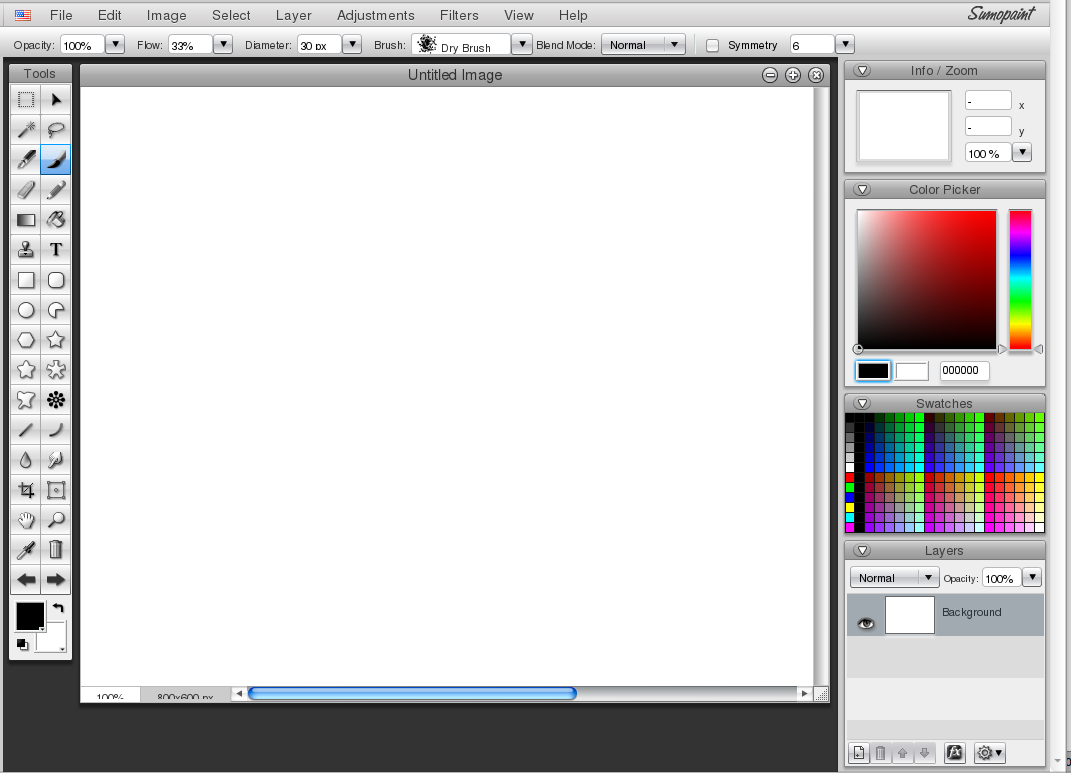 Sumopaint is another real competitor to famous desktop apps. Its functionality is comparable to the basic functionality (without the plugins) you will find in Photoshop or GIMP.

Similarly to Pixlr, with Sumopaint you can start a new image or open an existing one. As for formats, the free version supports only the native SUMO format, as well as PNG and JPG.

But for web graphics, this is just fine for most cases.

The Sumopaint interface is very similar to Photoshop — the key difference being that the free version has ads. 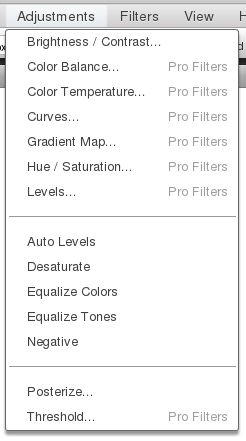 I am not going to list all the features of the program. Instead, here are some screenshots of its Toolbox and some of the menus.

There you can find some great tools, including a Symmetry tool that doesn’t even have an obvious equivalent in Photoshop or GIMP.

All in all, Sumopaint is a great program for web graphics. For the majority of common design tasks it will likely be a feasible replacement for GIMP or Photoshop.

Photoshop Express is a free graphics program from Adobe. As you might expect, it’s a very trimmed down version of Photoshop, but its combination of Adobe familiarity with ‘free’ no doubt proves very tempting for many users.

In comparison to Pixlr and Sumopaint, Photoshop Express is a poor relative. Firstly, you can work with JPEG only. Secondly, you can’t create a photo from scratch – unless you don’t upload an empty one.

Thirdly, it has a fraction of the functionality. On the other hand, Photoshop Express is so feature-limited, that it can’t take long to search and understand the entire application.

Most of the functionality is concentrated in the left frame (where usually the Toolbox is). Here you have two tabs – Edit and Decorate. Edit contains options such as Crop, Resize, Red-Eye, Touchup, basic adjustments, such as White Balance, Sharpen, etc., and effects such as Crystalize, Pixelate, etc.

This is all you get from Photoshop Express, and it seems to be pitched more firmly at home and small office photo-retouchers, than anyone manipulating imagery for a living.

Certainly not a comprehensive Photoshop or GIMP stand-in, but still useful for basic tasks, if you are comfortable with a JPEG only output.

Lunapic is one more free, ad-supported graphic editor with lots of options. Its interface is a blend of web app and GIMP/Photoshop, but this isn’t very confusing. In terms of features, it has plenty of them – both features that are standard for a desktop graphics program, and features many other, if any, editors have.

For instance, with Lunapic you can encrypt/decrypt images or save them to your computer, Imgur, email, Tumblr, Picasa, Facebook, Web, etc. These are handy for Web graphics and are nice to have even though you might not use them very often.

The Lunapic toolbox is a little… peculiar, containing options such as Cut, Copy, Paste, or Print. While most other graphic editors don’t tend to treat these options as ‘tools in a toolbox’, I must admit it’s convenient to have them there.

It’s a similar story with the menus.

You have the same commands you know from GIMP/Photoshop, but they live in strange places, like Crop, Resize, or Scale in the Edit menu.

Of course, this isn’t the end of the world, but if you are used to the way menu items are arranged in GIMP/Photoshop, this will be a little confusing at first.

One more difference between the menus of Lunapic and the menus in GIMP/Photoshop is that Lunapic offers (probably) more functionality than the base versions of GIMP and Photoshop.

Of course, you might never need these functionality, but it’s nice to know they are there.

Just have a look at just some of the options you have available!

To be honest, I couldn’t sample all the options in the menus – this will require a day or two – but from my testing, it was all very impressive.

You can even edit videos with Lunapic, not to mention the numerous animation options. All in all, Lunapic is a fascinating editor, and I dare say in some aspects it’s even better than GIMP/Photoshop.

FotoFlexer is a free program with plenty of options. They promote themselves as the world’s most advanced online image editor, though I wouldn’t say this — especially when I compare it to the other editors on the list.

For me personally FotoFlexer is not a true contender for GIMP/Photoshop replacement and this is not just because it has the interface of a Web application, rather than a desktop graphics program.

For a designer, who is used to the interface of GIMP/Photoshop, this Web-app interface is confusing. What is more, they don’t follow the standard menu convention – i.e. Smooth and Sharpen are under Beautify. 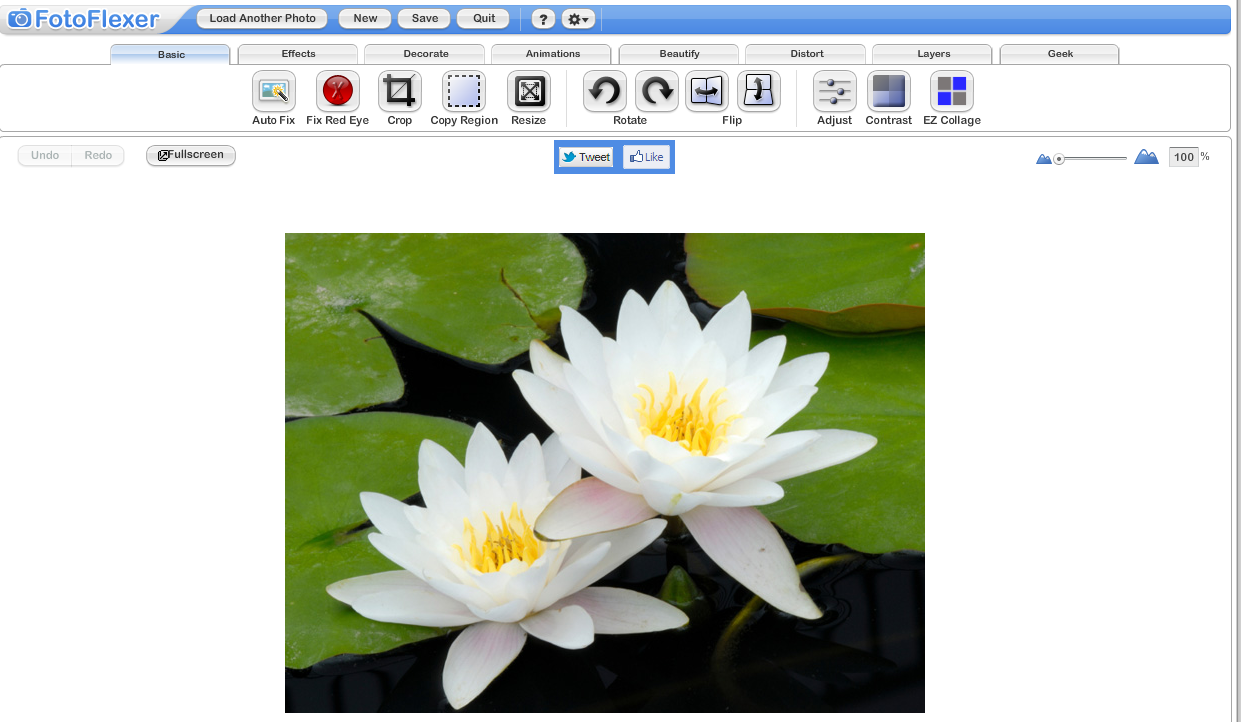 Of course, if everything else works OK, then the interface issue just becomes a minor glitch in the beginning. However, FotoFlexer has ads and is also a little slow.

Of course, these don’t have to be deal-breakers, and since it does have good options for basic image editing and beyond, for many design tasks, it’s a choice.

Here are the FotoFlexer menus to get an idea of what it can do.

There are some good options and you can do really a lot with FotoFlexer, but I couldn’t pitch it as a genuine Photoshop/GIMP replacement.

Pixlr, Sumopaint, and Lunapic are all unusually rich in features and can comfortably compete with Photoshop and GIMP for many day-to-day graphics projects. Sure, they don’t replicate every features of Photoshop and GIMP, but they offer more than enough for advanced design tasks.

They are viable alternatives and depending on what your design tasks are, could well be a replacement of the basic versions of GIMP and Photoshop.

One aspect that I personally can’t go without is the GIMP/Photoshop plugin infrastructure, but if basic functionalities are to be compared, for web graphics, Pixlr, Sumopaint, and Lunapic could all make me ditch my dependency on the desktop.

Photoshop Express and FotoFlexer certainly have fewer features and more limitations, but can perform a range of relatively complex graphics tasks.

However, their limited functionality would rule them out of anything beyond the most basic design tasks.

I’ve been amazed at what can be accomplished in a modern browser today.

Even if it’s just when you visit your parents or friends, give these apps a test drive.