Perhaps I’m showing my age but is it really 20 years since Wolfenstein 3D exploded onto the PC gaming scene? To celebrate that momentous occasion, the full game can now be played online within your browser at: 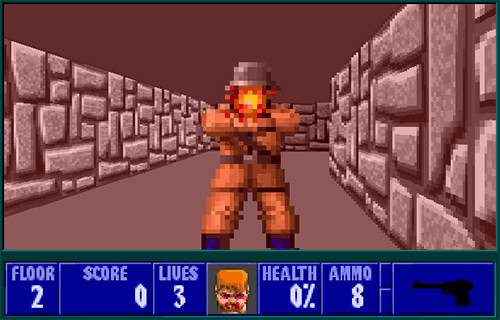 (Note the game is recommended for those over 12 and banned in Germany and several other countries).

The site states it’s compatible with IE9, Firefox, Chrome and Safari — although Opera seems to work if you’re not too bothered by a few graphical glitches. The game is mouse-enabled (set it within the configuration options) although few PCs had mice in 1992 and you’ll find keyboard control best.

Wolfenstein was released as DOS shareware in 1992. The web was largely unknown and bulletin boards were the reserve of rich geeks but, despite a lack of social networks and online file sharing, word spread and so did thousands of 720kB floppy disks. Suddenly, there was a reason to use a PC for more than Lotus-123 spreadsheets.

So why the fuss? Wolfenstein started the 3D first-person gaming genre. In 1992, there were relatively few 3D games and most resorted to isometric graphics (Marble Madness, Paperboy), wire-frame (Star Wars, Elite, Starglider) or faked overlaid 2D sprites (Outrun, Chase HQ, Space Harrier). True 3D games were available in the arcades (I-Robot, Hard Drivin’) but they took themselves a little too seriously and couldn’t be replicated on the 16-bit PCs of the day.

I remember playing Wolfenstein for the first time; it changed my perceptions about what could be achieved on a PC. While it looks basic today, having the freedom to explore realistic 3D rooms blasting stuff was revolutionary — and shouldn’t have been possible given the hardware limitations.

More importantly, the game was fun; you played a prisoner trying to escape from a Nazi-controlled castle in World War II. The VGA gore was amusing and you could defeat a robotically-enhanced Hitler at the end of the game. That said, not everything was perfect. The walking movement was unrealistically smooth and the corridor map was always rectangular — combine that with may hours game play and Wolfenstein remains the only game which made me feel genuinely queasy!

iD Software’s success with Wolfenstein led to Doom a year later — it’s fair to say you wouldn’t be playing Call of Duty today if it weren’t for those two ground-breaking games.

A version of Wolfenstein was released on almost every computer and gaming platform (even Nintendo permitted the gore-fest on their family-friendly consoles, although iD were instructed to replace guard dogs with large rats). The browser version if faithful to the original DOS version and permits you to play every level. Actually, it probably plays and sounds better than it did on the latest 386 PCs we had in 1992.

Technically, the game is implemented using JavaScript and HTML5 audio. I first thought it was rendered using a canvas element but, thanks to further investigation by Matt Vaughan (below), it’s actually 320 horizontally-stacked DIVs which have their background, vertical size and top location modified as you move around. It’s clever but slightly unusual solution. The full page weight is a little over 800kB of mostly uncompressed JavaScript — impressive given that most sites use that for their home page.

But who cares about the technical details … Happy Birthday Wolfenstein 3D and thanks for 20 great years of great gaming.