Today, I’d like to share with you the basics of collisions , physics and bounding boxes by playing with the WebGL babylon.js engine and a physics engine companion named oimo.js. 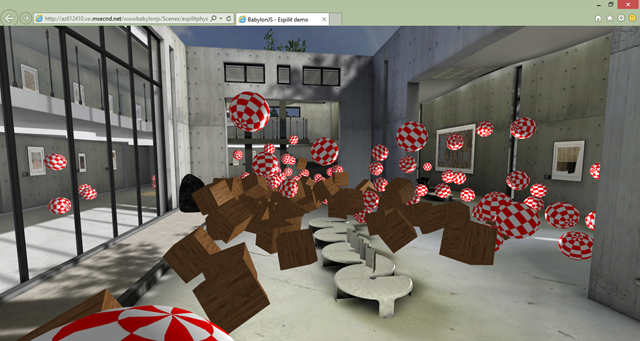 You can launch it in a WebGL compatible browser —like IE11, Firefox, Chrome, Opera Safari 8, or Project Spartan in Windows 10 Technical Preview —then, move inside the scene like in an FPS game. Press the “s” key to launch some spheres/balls and the “b” key to launch some boxes. Using your mouse, you can click on one of the spheres or boxes to apply some impulse force on it also.

Looking at the Wikipedia Collision detection definition, we can read that:

“Collision detection typically refers to the computational problem of detecting the intersection of two or more objects. While the topic is most often associated with its use in video games and other physical simulations, it also has applications in robotics. In addition to determining whether two objects have collided, collision detection systems may also calculate time of impact (TOI), and report a contact manifold (the set of intersecting points). [1] Collision response deals with simulating what happens when a collision is detected (see physics engine, ragdoll physics). Solving collision detection problems requires extensive use of concepts from linear algebra and computational geometry.”

Let’s now unpack that definition into a cool 3D scene that will act as our starting base for this tutorial.

You can move in this great museum as you would in the real world. You won’t fall through the floor, walk through walls, or fly. We’re simulating gravity. All of that seems pretty obvious but requires a bunch of computation to simulate that in a 3D virtual world. The first question we need to resolve when we think about collisions detection is how complex it should be? Indeed, testing if 2 complex meshes are colliding could cost a lot of CPU, even more with a JavaScript engine where it’s complex to offload that on something other than the UI thread.

To better understand how we’re managing this complexity, navigate into the Espilit museum near this desk:

You’re blocked by the table even if there seem to be some space available on the right. Is it a bug in our collision algorithm? No, it’s not (babylon.js is free of bugs! ;-)). It’s because Michel Rousseau, the 3D artist who has built this scene, has done this by choice. To simplify the collision detection, he has used a specific collider.

Rather than testing the collisions against the complete detailed meshes, you can put them into simple invisible geometries. Those colliders will act as the mesh representation and will be used by the collision engine instead. Most of the time, you won’t see the differences but it will allow us to use much less CPU as the math behind that is much simpler to compute.

Every engine supports at least 2 types of colliders: the bounding box and the bounding sphere. You’ll better understand by looking at this picture: 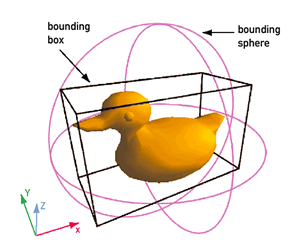 This beautiful yellow deck is the mesh to be displayed. Rather than testing the collisions against each of its faces, we can try to insert it into the best bounding geometry. In this case, a box seems a better choice than a sphere to act as the mesh impostor. But the choice really depends on the mesh itself.

Let’s go back to the Espilit scene and display the invisible bounding element in a semitransparent red color: 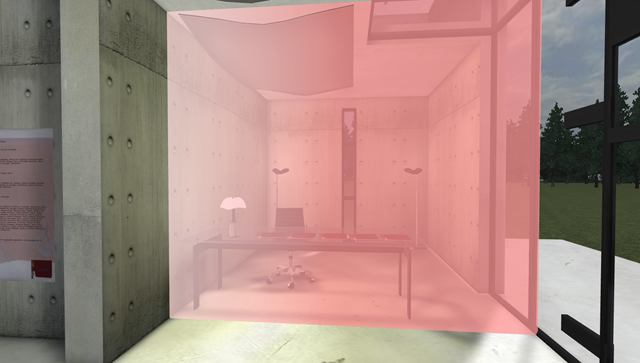 You can now understand why you can’t move by the right side of the desk. It’s because you’re colliding (well, the babylon.js camera is colliding) with this box. If you’d like to do so, simply change its size by lowering the width to perfectly fit the width of the desk.

Note: if you’d like to start learning babylon.js, you can follow our free training course at Microsoft Virtual Academy (MVA). For instance, you can jump directly to the “Introduction to WebGL 3D with HTML5 and Babylon.js – Using Babylon.js for Beginners” where we cover this collision part of Babylon.js. You can also have a look at the code inside our interactive playground tool: Babylon.js playground – Collisions sample.

Based on the complexity of the collision or physics engine, there are other types of colliders available: the capsule and the mesh for instance. Extracted from: Getting Started with Unity – Colliders & UnityScript

Capsule is useful for humans or humanoids as it better fits our body than a box or a sphere. Mesh is almost never the complete mesh itself—rather it’s a simplified version of the original mesh you’re targeting—but is still much more precise than a box, a sphere or a capsule.

To load our Espilit scene, you have various options:

Download it from our GitHub repository, and then follow the Introduction to WebGL 3D with HTML5 and Babylon.js – Loading Assets module of our MVA course to learn how to load a .babylon scene. Basically, you need to host the assets and the Babylon.js engine into a web server and set the proper MIME types for the .babylon extension.

Note: if you are unfamiliar with Visual Studio, take a look at this article: Web developers, Visual Studio could be a great free tool to develop with… Please note also that the Pro version is now free for a lot of different scenarios. It’s named Visual Studio 2013 Community Edition.

Of course, you can still follow this tutorial if you don’t want to use Visual Studio. Here’s the code to load our scene. Remember that while most browsers support WebGL now – you should test for Internet Explorer even on your Mac.

The way we’ve been integrating physics in Babylon.js is via a plug-in mechanism. You can read more about that here: Adding your own physics engine plugin to babylon.js. We’re supporting two open-source physics engine: cannon.js and oimo.js. Oimo is now the preferred default physics engine.

The first thing to do is to enable physics on the scene. For that, please add this line of code:

You’re setting up the gravity level (-10 on the Y axis in this sample code, which is more or less like what we have on Earth) and the physics engine you’d like to use. We’ll use Oimo.js but the commented line shows how to use cannon.js.

Now, we need to iterate through all non-visible colliders used by the collision engine and activate physics properties on it. For that, you simply need to find all meshes where checkCollisions is set to true but not visible in the scene:

And we’re done! We’re ready to throw some objects in our scene and put a lot of mess in this beautiful but way-to-calm museum.

We’re now going to add some spheres (with an Amiga texture) and some boxes (with a wood texture) to the scene. This meshes will have physics state set. For instance, this means that they will bounce on the floor if you launch them in the air, bounce between them after a collision has been detected and so on. The physics engine needs to know which kind of impostor you’d like to use for the mesh (plane, sphere or box today), the mass and friction properties.

If you’ve chosen “option 1“, you can download the two textures here: physicsassets.zip

Add this code to your project:

You can see that boxes are heavier than the spheres by 4.

Note: if you need to understand how material works in babylon.js, watch to this module: Introduction to WebGL 3D with HTML5 and Babylon.js – Understanding Materials and Inputs or play with our dedicated Playground sample: Babylon.js Playground – Materials sample

Add these two lines of code after the scene.enablePhysics line:

And launch the web project. Navigate to the center of the museum and press rather the “s” or “b” keys. You’ll obtain this fun result: Let’s add another cool feature: the ability to click on one of the objects to throw them away. For that, you need to send a ray from the 2D coordinates of the mouse inside the 3D scene, check if this ray touches one of the interesting meshes and if so, apply an impulse force on it to try to move it.

Add this code into the addListeners() function:

Launch your code in your favorite browser. You can now click on your physic meshes to play with them.

Displaying the bounding boxes to better understand the whole story

Finally, we’re going to create a debug scene to let you display/hide the colliders and activate/deactivate the physics properties on them.

We’re going to inject the UI into this div:

And we’ll use this function to handle the UI:

I know, it generates a very ugly UI but I was too lazy to spend more time on it. Feel free to improve it! :-P

Call this new function and launch the web project. Now, for instance, display the colliders 12 & 17 : 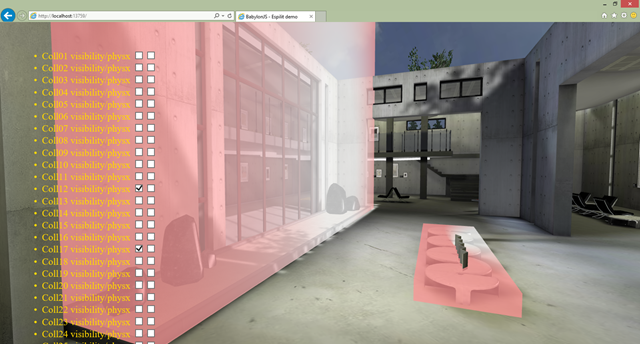 You can play with this debugging sample directly in your browser here: babylon.js Espilit Physics debug demo.

Please also have a look at this awesome demo built by Samuel Girardin that also use Oimo.js on some funny characters: 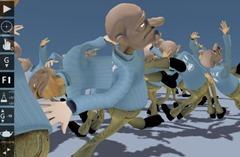 This article is part of a web dev tech series from Microsoft. We’re excited to share Project Spartan and its new rendering engine with you. Get free virtual machines or test remotely on your Mac, iOS, Android, or Windows device with modern.IE.

David Rousset is a Senior Program Manager at Microsoft, in charge of driving adoption of HTML5 standards. He has been a speaker at several famous web conferences such as Paris Web, CodeMotion, ReasonsTo or jQuery UK. He’s the co-author of the WebGL Babylon.js open-source engine. Read his blog on MSDN or follow him on Twitter.

Using Babylon.js to Build 3D Games for the WebRaanan Weber

Why and How We Migrated babylon.js to Azure: CORS, gzip, and IndexedDBDavid Rousset