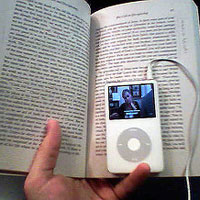 A new report from Nielsen finds that television viewership is on the rise (at least in the US), hitting record numbers last quarter in terms of viewership, despite gains in web and mobile video consumption. The report found that users are watching an average of 142.5 hours of television per month, and using the Internet for 27 hours each month. Additionally, mobile video consumption is up to 3.5 hours each month.

That’s approximately 5 hours and 45 minutes spent in front of a screen each day. Across the board that represents fairly significant percentage gains year-over-year in terms of screen time (up 4.1% for TV and 5.7% for web use).

Given that we’re increasingly faced with more and more information, and that our attention spans are on a rapid decline, there is a finite amount of our attention to go around. With so much added time being given to screens — television, computer, mobile — something must be taking a hit.

It could be any number of non-digital areas: reading, socializing, sports and recreational activities, productivity at work. According to the US Bureau of Labor Statistics’ annual American Time Use Survey, whose TV numbers are slightly lower than Nielsen’s, the area that seems to have taken the biggest hit over the past five years is socializing and communicating (though it’s a little hard to tell due to changed reporting methodology between the 2003 to 2008 studies).

Reading however, is virtually unchanged. That’s surprising, given that other studies have found declines in reading population over the past few years. The National Endowment for the Arts published a study last year, for example, which concluded that Americans are reading less and reading less well than they were twenty years ago.

Others point out that people are still reading, they’re just doing it in front of a screen now, rather than a printed page. Certainly new types of reading are emerging, but video continues to pull at our attention more and more from every angle.

In any case, our attention is becoming increasingly fragmented and more and more of it is going to the glowing electronic screens in our lives. Is that a bad thing? The current generation is the first to be growing up in a world dominated by television, the web, and mobile phones. Will their increasingly all digital lifestyle be a bad thing in the long run? Let us know your thoughts in the comments below.

HTML Email Testing — Read This Before You Hit SendAlex Walker