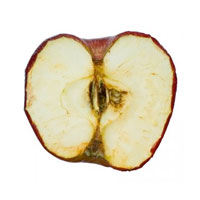 (Note: This post is just about Apple’s public perception — the iPhone and Safari both prove that Apple does get the web on a very real and important level and has a huge stake in its future.)

A few days ago, search and advertising guru John Battelle put up his annual list of web tech predictions. About Apple, this is what he wrote:

Apple will see a significant reversal of recent fortunes. I sense this will happen for a number of reasons, but I think the main one will be brand related – a brand based on being cooler than the other guy simply does not scale past a certain point. I sense Apple has hit that point.

After watching the lackluster keynote given by Apple Senior Vice President of Worldwide Product Marketing Phil Schiller earlier this week at MacWorld, it would be easy get on board with that prediction. Apple failed to really impress at the conference, offering not much more than really cool, but rather underwhelming software and hardware updates.

In a post today on his blog, marketing pro Steve Rubel offers three reasons why the Internet is to blame for the shine starting to wear off Apple. I’d encourage you to read the post, but his most interesting point is his third: cloud computing and netbooks are eroding Apple’s edge.

Rubel says that most of his computing needs are now handled by online applications, and though he admits that as an ultra-early adopter he’s not like most users, he thinks cloud computing is the future for us all. The rise of web-based computing “means you will be able to be just fine using a netbook or even a phone. The category is still emerging and many are still 1.0 products. But I expect that to change and if the current economic climate continues, then it could erode Apple’s notebook share,” he writes.

We wrote earlier this week that web applications reset the playing field, and have created new opportunities for companies to compete in areas they were never before competitive. That goes for heavyweights like Apple, Google, and Adobe, the same as it does for small, web development upstarts.

Unfortunately, what we thought would be Apple’s first major push into the SaaS world (not counting the rocky launch of MobileMe last July), iWork.com, turned out to be a disappointment. iWork and MobileMe are “gorgeous, for sure,” says Rubel. “However, functionally, they don’t hold a candle to Google or Adobe’s web apps. And I think Microsoft’s products here for sure will be strong.” They also don’t hold a candle to apps from smaller web startups, such as Zoho or Sharpcast.

So far, the shift to cloud computing seems to be an area where Apple is asleep at the wheel. iWork.com has the feel of a missed opportunity for the time being, though Schiller hinted at potentially more impressive things on the horizon during his MacWorld address.

Another reason why Apple is starting to see their mojo fade was articulated by a commenter on Rubel’s post: Apple is not participating in the conversation.

“Others have always carried out the conversation for them (and nicely so) but this means that when they don’t like the way the conversation is going (a problem that is only slowly happening now from time to time) they have nothing established to be part of it, or to steer it a bit,” writes Kris Hoet, who works for Microsoft Europe.

We reported on a Forrester Research study in December that found that the most trusted sources of brand information were those that were conversational. The Internet and social media have made getting in the conversation a necessary part of the maintaining a PR edge. Apple needs to wake up to that fact.

Raw and Responsive: Design Resources that will make your websites shinePeter North