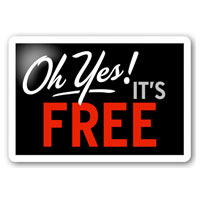 “The problem with free is that every time you double the size of your database the cost of maintaining the site grows 6 fold,” says Markus Frind, the founder and CEO of Plentyoffish.com, a wildly successful dating site that makes a lot money by giving away for free what other sites charge for. But even for users who ultimately charge for their product there can be a downside to giving something away for free.

Frind’s site, of course, is using an ad-based business model, which is becoming harder to support in today’s shaky economy, so charging for your product might be a safer way to go. One of the most popular free-centric business models is the freemium model, in which base versions of products are given away for free, and more feature rich versions are charged for. The idea is that enough people will pony up for the fancy edition to pay for all the freeloaders, and turn a profit.

However, if Frind is right about ballooning costs as your user base doubles, even the freemium model has pitfalls.

Let’s do some simplified math. Say your users cost you $1 each per user, per year for hosting, acquisition, support, etc. Let’s say you have 100 total users, which means you’ll pay $100 each year in costs. Assume that just 1% of the users you sign up will turn into paying users at $10 per month (a figure that comes from Ryan Carson of DropSend), which equals $120/year on those 100 users — so you’re above water.

Now scale up to 200 users. If Frind is correct, you’ll actually end up with $1,200 per year in costs — you’ve doubled your user base, so your costs go up six time to $6/user. Your conversion rate likely won’t, however, so you’ll have just 2 paying customers and revenue of $240 per year. You’re now way, way in the red. Even if Frind is exaggerating, and costs only go up 50% with every doubling of your user base, free can still wind up costing you money. In our example, if your costs up 50% with every doubling, when you hit 400 users, they’ll cost your $900 per year, but only bring in half that in revenue.

Clearly, the math will be different for you — your per user costs might be lower, and the pricing on your app might be higher, and the costs might creep up at a slower pace. However, assuming costs do go up exponentially as you add more users, then it will eventually catch up to you. So the key is to up the conversion rate and if you can, to extract value from those free users.

The latter is what spam-filtering service Mollom is doing. Founder Dries Buytaert, who also founded the Drupal project, reports on his blog that Mollom is able to extract great value from the freeloaders on their system — who make up the vast majority of customers — by utilizing their input to make their paid product more useful.

“We currently have more than 3,000 active users that use Mollom for free,” writes Buytaert. “Say each user spends on average 15 minutes a week moderating his site’s content and reporting classification errors to Mollom. Mollom learns from this feedback and automatically adjusts its spam filters so that all other Mollom users benefit from it. At a rate of $10 USD/hour, we get $390,000 USD worth of value from free users a year — 3,000 users x 15 minutes/week x 52 weeks/year x 10 USD/hour = $390,000 USD/year. If these numbers hold up, the value of a free Mollom user could be estimated at $130 USD/year. And that doesn’t include the marketing value they add.”

Mollom users add value that makes the service more attractive to paid customers and ups the chance that they might choose Mollom over competing services, such as Akismet. Of course Buytaert concedes that “the value of a free user probably declines as you get more of them and the business becomes stronger.”

I believe he is referring to their marketing value — the more users you have, paid or free, the more potential brand ambassadors and the greater the chance of word-of-mouth success — but taken in context with Frind’s statement about costs skyrocketing with user numbers, the value of free users almost certainly declines the more of them you get.

Extracting value in the way Mollom does from freeloaders is one way to raise the conversion ratio, but it won’t work for every business. The other way is the find the sweet spot for the free version that offers just enough to keep people interested, but not enough that they’ll never upgrade. Finding that sweet spot requires experimentation and knowing what people will pay for.

In August, I wrote a blog post titled “Better Than Free,” in which I printed advice from Michael Galpert, one of the founders of online image editing tool suite Aviary (our coverage), about what people will pay for. I’ll reprint that advice below.

What sorts of things can you offer your users to turn them into paying customers and reap the benefits of free?