This article was peer reviewed by Edwin Reynoso, Tim Severien and Divy Tolia. Thanks to all of SitePoint’s peer reviewers for making SitePoint content the best it can be!

In the past, cross-platform software development often meant writing the same application in different languages for different operating systems. As you can imagine, this was a difficult situation for project managers, developers and customers alike.

Then, in 2011, Roger Wang introduced something called Node-Webkit. Node-Webkit (which has since been renamed to NW.js) is a combination of Node.js and an embedded WebKit browser which allows developers to use web technologies (i.e. HTML, CSS and JavaScript) to develop native apps. Yes, that’s right! We get to write native apps, using all the goodies that are supported in our modern browsers. For example, CSS3 animations, WebGL, WebRTC, video, audio, and plenty more can all be incorporated into a native application.

In this tutorial, I am going to demonstrate how to harness the power of NW.js to make a tabbed browser, which can be deployed on all major operating systems. As ever, the code for this tutorial can be found on our GitHub repo.

As the name suggests, NW.js is based on Node, so you’ll need to have that installed on your operating system. We’ll also be making use of npm (the Node Package Manager). If you need help getting either of these things set up, then check out our tutorial: A Beginner’s Guide to npm.

Next we’ll need a folder for our project:

We’ll also need some dependencies that should be installed globally (namely, Yeoman, Grunt and Bower):

Of these, Yeoman (AKA Yo) is a tool to scaffold everyday projects dynamically, thereby avoiding the hurdles of always having to create reusable project structures manually. Grunt is a task runner which Yeoman uses. It also uses npm and Bower to install required dependencies.

Next, we’ll install Yo’s generator-wean. You can either do this globally or locally. Here I’ll do it globally:

NW.js itself has a handful of generators but generator-wean (authored by me) comes bundled with ExpressJS and AngularJS which eases the stress of installing and configuring them. WEAN stands for Webkit, Express, Angular and Node just like the popular MEAN.

Now our skeleton app can be generated with one command:

Yo is an interactive guy and the generator will ask you some questions in order to assist in making a project that best suits what you want. Here you can just accept the defaults.

For this project, we are interested primarily in the contents of the public directory. The generator will have filled these files with a bunch of boilerplate (a very simple Angular app), but we will be addressing that as we go.

We can now run the skeleton app using:

This command can be used at any point in the app development to preview changes. It executes the NW.js project which in turns uses Express for routing just as you would when making a web application. This is a good example of how we can use Node modules in NW.js by injecting them in the app/index.html after initializing.

NW.js also has developer tools and toolbars where we can find controls to refresh, debug, inspect, log, etc just as we do when building a web application in Chrome. You can access these by clicking the hamburger icon in the skeleton app.

Dealing With the UI

The most important aspect of this tutorial is to be able to surf the internet from our native application. The webview and iframe tags are perfect candidates for our plan. The webview tag is effective but quite new to the game as it was only recently added to NW.js. The iframe tag, however has been around since HTML 4 and has wide support. We will use it because it is well-known to most developers.

Bootstrap will serve as the base for our UI. We will use a custom bootstrap theme named Slate from Bootswatch. Download Slate and place it in app/public/css/bootstrap.css.

For our icons, we will make use of Font Awesome. From the project root run:

This will download Font Awesome to our libs folder just like other bower dependencies. This is because we specify the following line in the .bowerrc file in our project root (the default is otherwise bower_components).

Fortunately, Bootstrap will handle most of the UI tasks but we need to tweak some of the components and contents to actually make a browser that looks good. To achieve this, we will write some simple and short CSS and place it in app/public/css/app.css:

The html, body, tab-content and tab-pane height are set to 100% to ensure that regardless of the size of our browser app, the content should fill up the height of the window. By default, width is 100% so there is no need to explicitly specify it. We also give a minimal style to our browser controls which we will be seeing in a while.

To make sure all our CSS files are loaded, copy the following into the head section of app/views/index.ejs. This should replace the two style sheets that are already there.

As mentioned, my WEAN generator comes bundled with AngularJS, which we will be making use of for our browser app. We will also be making use of Bootstrap’s tabs component to display our browser’s tabs. There is however a known problem when trying to bring in the Bootstrap JavaScript components into an Angular project, which is why the Angular team created Angular Bootstrap UI.

Let’s add that to our project. From the root directory run:

AngularJS is good with security and places restrictions on things considered potentially harmful. At some point in our app, we will have to sanitize our HTML and stop Angular from throwing errors when it encounters trusted HTML being injected into our code. A module that handles this kind of situation is ngSanitize (which we will soon encounter). This too should be installed using Bower:

If you are asked by Bower to chose a version of the library, select the one which resolves to angular#1.4.6.

Just as we have done with our CSS files, let’s include the JS dependencies before the body closing tag in app/views/index.ejs:

The final thing to do in the way of setup is to inject the dependencies we just downloaded into our Angular app app/public/js/app.js:

At this point we have a skeleton of the app. Our CSS files (both library and custom) have been installed and/or created. The JavaScript files along with their dependencies have also been made available and added to the app. If you run grunt at this point, you should see is a blank window. Exciting, huh?

Now, all that is left in the development process is to flesh out the remaining part of the mark-up and create the behavior in the app.js.

NW.js uses HTML for its views. We have already created one with the generator (app/views/index.ejs) and loaded some files into it. We now need to add the markup that will help us launch web pages in our native app.

The uib-tabset tag is an Angular directive provided by the Angular Bootstrap UI library to help implement a tabs component, while iframe-tab will be created in our app to customize Bootstrap’s UI tab directive to suit us. The iframeTab directive will be configured using the tabs scope which appears as an attribute on the iframe-tab tag.

Tabbed browsers like Chrome and Firefox are easier to navigate and boost users’ productivity. Our own browser should not be left out. In the app/public/js/app.js file we will create a minimal directive to implement tabbing.

What we are doing here is creating a reusable template that can be created dynamically using Angular. The trustSrc() method on the iframe src attribute will be created in our controller.

Explaining how directives work in Angular is beyond the scope of this article. If you’re in need of a refresher, check out: A Practical Guide to AngularJS Directives.

Angular uses services for code organization, reusability, communicating with APIs and the sharing of logic between its controllers. We need to make three for ourselves: one (prompt) to use prompts to get URL inputs and the other two (GUI and Window) to communicate with NW.js’ GUI and Window APIs so that we can create custom minimize, full-screen and close buttons:

The Controller at Last

The controller, just as the name goes, will control the flow of data in the application. We will inject the following dependencies: $scope, $sce (a service that provides Strict Contextual Escaping services to AngularJS), prompt, Window (the two services we created above).

We will first create a method to trust a resource URL (which we already implemented in the directive):

It would be awesome to make SitePoint our home page, so we will create an array of tabs for our directive to loop through with SitePoint’s URL as the first value.

We can now launch new tabs using the prompt service to get the URL from the user. We set the active attribute to true, so that the new tab receives focus:

Closing tabs involves using the Array#splice function to remove values from the tabs’ array as seen below:

The rest of the controller is used to add behavior to the controls which are for minimizing, enabling/disabling fullscreen and closing the window:

We have yet to add these controls to the markup even though we have added the implementation. So let us do that now (in app/views/index.ejs):

And that’s it! You can now launch the browser using the grunt command from the terminal. 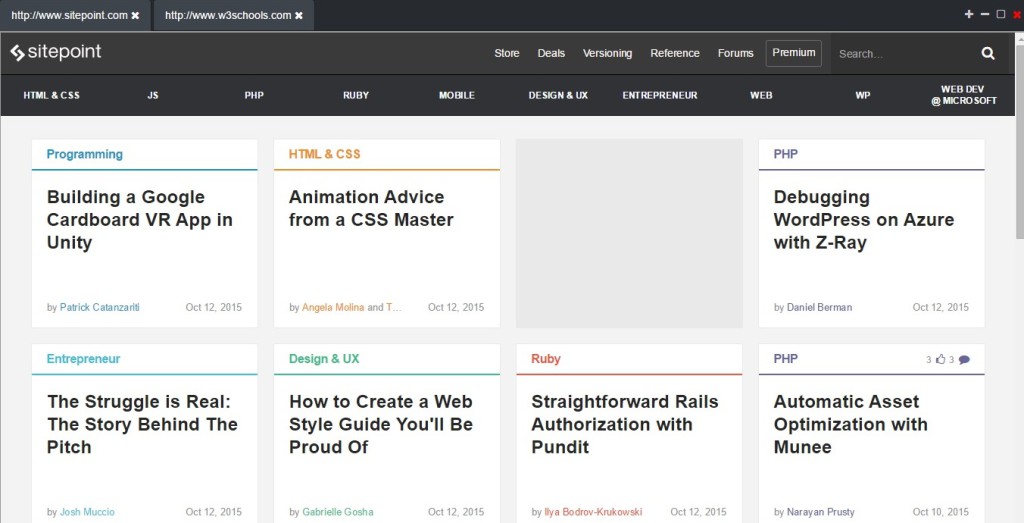 If you cast your mind back to the start of the article, I mentioned that it is possible to deploy a NW.js app on all major operating systems. There are extensive instructions on how to do this on the NW.js project page, or you could use generator-wean’s pre-configured build task (which I will now demonstrate).

By way of an example, if you are on a 64-bit Linux system and run:

This will generate a builds/test/linux64 directory which contains an executable, corresponding to the name of your project.

With that I hope to have demonstrated not just the power of NW.js, but the power of web technologies in making native applications. We did not just learn how to make a native browser, but we also saw NW.js, Yeoman and other tools in play. Don’t forget, the source code for this tutorial is on GitHub — I encourage you to download it and experiment.

Are you using NW.js? Do you think that it can mount a serious challenge to native applications? I’d love to hear your thoughts in the comments below.

I have passion for instructing computers and understanding their language and would die to remain a computer programmer in my next life. I really love to write about code at http://coolandcodes.com and scotch.io