Over a month has passed since we launched our best book deal ever to help raise money for the Australian Red Cross Victorian Bushfire Appeal. For those who don’t recall, we offered five SitePoint PDFs for the price of one, with every penny raised donated to the Red Cross Appeal.

We reported some early figures after day one, but with the checks now safely deposited in the bank and the numbers verified, we can officially announce the final amount that was raised.

And here it is (drumroll please) …

I’m sure you’ll agree this is a massive sum, which far exceeded our expectations.

SitePoint is a small team of 30 people, and we’re tremendously proud of what we were able to achieve relative to our size!

We could never have done it alone, and would like to thank every single person who took up the offer and helped to make a real difference to so many people’s lives – at a time when they needed it most.

We’d also like to thank everyone who helped spread the word on this initiative, in particular Darren Rowse from ProBlogger who really helped kick start the campaign.

Countless others in the online community, many of them sites that we might even consider to compete with sitepoint.com on a normal day, jumped on board without hesitation. It’s something about the web community that makes us so proud to be a part of the industry we’re in.

Hold up—how did this fundraiser come about?

Allow me, if you will, to take a moment to share with you some behind-the-scenes insight and our experiences with the fundraising initiative.

It all started on Monday the 9th of February. The mood of our office was extremely sober following the most tragic weekend Victoria has ever experienced, when the worst bushfires in Australia’s history raged uncontrollably throughout many parts of the state, destroying farms, homes and lives across the state. Every single member of the SitePoint staff of 30 was in some way impacted by the tragedy. Some staff had spent the weekend fighting flames on their own doorstep, while others were unable to contact friends and family who lived in the heart of the affected area. What was crystal clear to everyone in the office was that we all wanted to do something to help.

Across Victoria, there was such an outpouring of offers for assistance that the Red Cross had to turn people away, and donations of goods were so substantial that the Salvation Army had to lease an additional warehouse just to accommodate it all. But what they really needed was money – so money is what we decided to contribute. 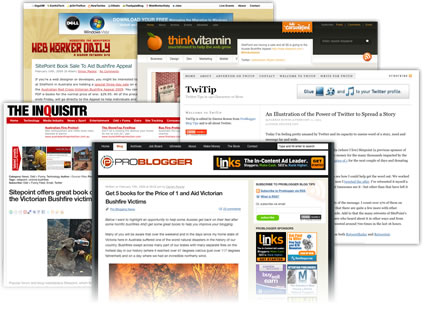 Our initial idea was to auction off a couple of bundles of the entire SitePoint Library with the hope of maybe raising US$5K-10K. However, after some further discussion we agreed that the best plan was to put together a super book deal and donate all the funds. The next question was when to get it started, and the answer was unanimous – right away.

What we witnessed in the following 24 hours was nothing short of amazing. The entire SitePoint crew dropped everything they were working on to do in 24 hours what would normally take 7 days. I’ve never witnessed such grit and determination in a business environment. By late Tuesday afternoon we were ready to go, but what happened next was what really blew us all away.

The power of social media 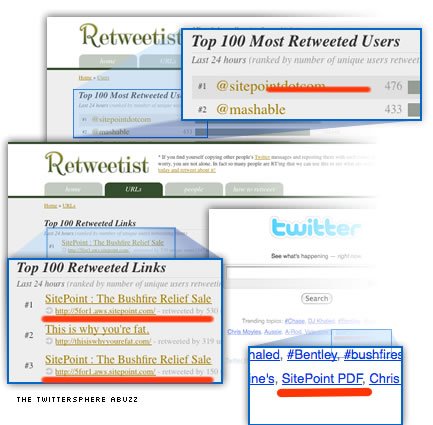 We had pre-organised some mentions of the campaign on a few sites. Darren Rowse, after hearing about our endeavours, even visited the SitePoint office to help in any way he could. Once the green light was given to release the book offer, Twitter exploded.

The initiative dominated the retweetlist and was firmly entrenched on the retweetradar. The coverage was great – but the response was even better. With the help of Twitter we smashed our US$50,000 target, raising US$75,000 in just the first 24 hours! 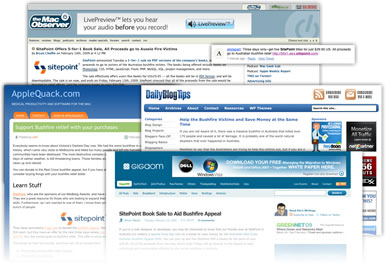 This was only part of our plan to promote this initiative. For the next three days we continued to spread the word, coverage continued to grow, tweets showed no sign of slowing, and people continued to dig deep into their wallets. By the end of the three days, we had exceeded our humble origins (the $10k auction idea) by an order of magnitude!

It was always our intention to have our results checked, and after PricewaterhouseCoopers initially offered and then struggled with other demands on their time, Deloitte stepped up to the plate.

Included below are pictures of the receipts of payments SitePoint made to the Red Cross. One the initial AU$315,000 payment and a second payment made once some delayed transaction came through. 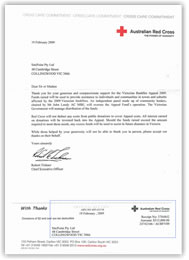 Again, thanks again to everyone who, through your kind support, helped to make this all possible – your contributions went a long way in helping those affected by this tragedy.

Windows Phone 8.1: Will the Underdog Appeal to Developers Now?Lars Klint