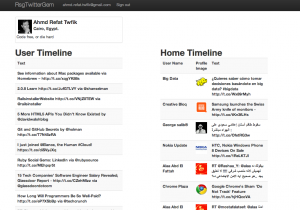 In the previous part of this series, we’ve covered the LinkedIn gem and created a simple application that covered authentication and APIs queries. We are going to build a similar application with the Twitter gem for the same purposes.

The application we are going to build with the Twitter gem is going to be the same a, what we built with LinkedIn. We will get all the user data from Twitter into our rails app models so we can display it in whatever format we want.

Before we start we need to run few commands to initialize the project.

We will need only to create one controller, which will handle the connection to Twitter. The controller will pull the data from the API and push it to our models.

Add the following line to the beginning of the TwitterController

You should specifiy the domain in Callback URL when you create the application on Twitter. For example, you should set the domain as http://0.0.0.0:3000 for development. After deployment you should change it to your domain name.

Now we can add a few helper methods to handle the authentication and APIs queries.

generate_twitter_oauth_url
* Specify the oauth_callback url, which the user will be redirected to after the user authorizes the application.
* Create a consumer object with your consumer key and secret.
* Store the @request_token object for later use and redirect the user to the authorization url. Don’t forget to pass the callback url.

oauth_account
* The TwitterOauthSetting object is used to store the access token and secret. We’ll go through this model in more detail later.
* Search to see if the current user has already authenticated the application.
* Retrieve the @request_token again, and get the @access_token object, with the :oauth_verifier parameter sent back from Twitter.
* Create a TwitterOauthSetting to store the Access token, and Access token secret.
* Call update_user_account to update the user object with their twitter account info.

index
This is the root action, which checks if this user has a twitter oauth setting object or not. If true, redirect to the twitter_profile action.

get_client
The configuration for this gem can be done in two different ways. The first way is the global configuration for single user. The other way, which we are going to use, is to configure each client with their token and secret, returning the client object to use.

twitter_profile
This action displays the user info, their timeline, and the home timeline.

update_user_account
Updating the user profile with their twitter account info. We’ll add these fields to the user model later.

Add the following to path/to/project/config/routes.rb

Modify the layout view path/to/project/app/views/layouts/application.html.erb by removing lines 65-74. Replace lines 50-52 with this:

We should stop here, and take a look at the Twitter APIs and what we are going to cover here. Also, we need to know the specification of the models to create in our application.

Twitter provides the developer with A field guide to Twitter Platform objects. There is four main objects you’ll deal with: Tweets, Users, Entities, Places. We are going to focus on the Tweet object.

Also known as a Status Update, Tweets are the basic atomic unit of all things Twitter. Users create Tweets. Tweets can be embedded, replied to, favorited, unfavorited, retweeted, unretweeted and deleted. A retweet contains an embedded Tweet object within the “retweeted_status” attribute.

In the Tweets page, you’ll find a Field Guide, which lists the fields of the Tweet object and the related objects.

Here is a few selected fields:

Coordinates
Represents the geographic location of this Tweet as reported by the user or client application. The inner coordinates array is formatted as geoJSON (longitude first, then latitude).
Object
Only surfaces on methods supporting the include_my_retweet parameter, when set to true. Details the Tweet ID of the user’s own retweet (if existent) of this Tweet.
Boolean
Indicates whether this Tweet has been favorited by the authenticating user.
Int
Number of times this Tweet has been retweeted. This field is no longer capped at 99 and will not turn into a String for “100+”
String
The actual UTF-8 text of the status update. See twitter-text for details on what is currently considered valid characters.
Users
The user who posted this Tweet. Perspectival attributes embedded within this object are unreliable.

Go to /path/to/project/app/models/user.rb and change line 9 to the following:

This is an important model which will store two values for each user. These values are used later to access their account without asking for permission each time.

Run the following command to create the above model:

Add the association between the user model and the twitteroauthsetting model:
path/to/project/app/models/twitter_oauth_setting.rb

There are a couple of examples on the gem repo on Github, for example:

Let’s put it all together and build a simple view to display the stored data.
Create a new file twitter_profile.html.erb at path/to/project/app/views/twitter/ 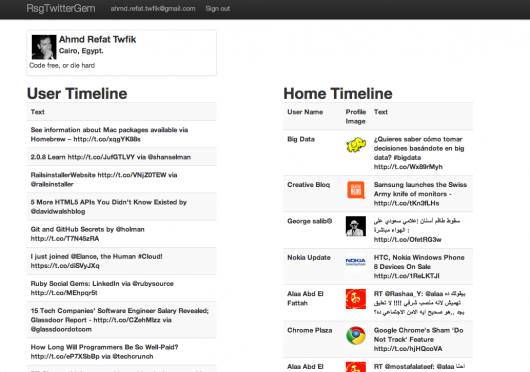 Well, I hope this tutorial was useful and a good introduction to using the Twitter gem and the APIs. If you would like to suggest the next gem to cover, do so in the comments. Thanks for reading!