In this series, we are going to cover gems based around social media and social media services, such as LinkedIn, Twitter, Facebook, Youtube, and any other suggested gems.

I should point out, before we start, another important gem: omniauth and omniauth-linkedin. These gems allow the user to login with their LinkedIn account, or Facebook, or Twitter, etc. We’ll dedicate a tutorial to Omniauth later, but we’ll use Devise to create simple user accounts in this article.

The application we are going to build with the LinkeIn gem is pretty straightforward. We will get all the user data from LinkedIn into our rails app models, so we can display it in whatever format we want.

Before we start, we need to run few commands to initialize the project.

We will need only to create one controller, which will handle the connection to LinkedIn. The controller will pull the data from the API and push it to our models.

Add the following line at the beginning of the linkedin controller

We’ll add a few helper methods to handle the authentication and APIs queries.

First, and before diving into any methods, we should define the configuration hash. The hash holds all the information to negotiate a connecion with the LinkedIn APIs. The request_token_path element grants permissions to access the different parts of the APIs, such as r_fullprofile for a full profile or r_network for connections.

You could add more tokens to request_token_path element by concatenating them with a +, such as:
/uas/oauth/requestToken?scope=r_basicprofile+r_fullprofile+r_emailaddress+r_network

The full object, which we will add at the top of the LinkedIn controller, is below:

The purpose of generate_linkedin_oauth_url method is to generate the linkedin authentication uri, which asks the user for permissions. The method checks first if the object already exists for the current user. If not, it’ll create a linkedin client object and build the request_token object with the oauth_callback. This callback is the method that will be called after the user grants the access. Now, store the request_token.token and request_token.secret in the session, as they will be used to create the persisted access tokens. Finally, redirect the user to the authorize_url. If the user has been here before, it will redirect them to the /oauth_account action directly.

The authentication method, which is set as the callback in the request_token object, authenticates the user for the first time. If the user is already authenticated, it will redirect the user to home without doing anything.

First, we create a linkedin client object with our keys (‘your-api-key’, ‘your-secret-key’) which you get after registering your application on the linked-in api. If the oauth_verifier params exists, which is passed by LinkedIn, the user has granted access to the application so we’ll authorize the client. When we authorize for the first time, we need to store and get the access token and secret to retrieve them later.

The get_client helper simply returns an authorized linkedin client object. Here, the linkedin_oauth_setting object is retrieved from database and authorizes the client object.

Here is the root action. It checks if this user already has a linkedin oauth setting. If so,it’ll redirect them to the linkedin_profile action.
index

Here we show simple html page of the data pulled from the linkedin APIs.
linkedin_profile

Add the following to path/to/project/config/routes

We should stop here to look at the LinkedIn APIs and what we are going to cover here. We will also learn the specification of the models we need to create in our application.

The LinkedIn developer site is the best place, this Quick Start Guide is comprehensive. The guide shows how to create the application on the LinkedIn, as well as how to get your API Key and Secret Key (which you should “never share with anyone”).

You’ll see a demonstration of how to connect with a ruby script without any gems which takes much more time than the gem.

The table on the Authentication page lists the permissions, which we’ll see how to use it later.

Here’s few of them:

We’ll focus on the Profile Fields part of the APIs, because we can’t cover the whole API. I think you’ll get a good sense of how the gem works by writing this demo application.

Let’s focus first on the Basic Profile Fields. This will be the first part from the API to map to our rails application.

This is an important model that stores two important values for each user that allow access their account without asking for permission each time.

Run the following commands to generate the above model:

Remember always to check this line above each table “These fields require the r_basicprofile member permission” to use this permission params later.

Selecting few attributes to add to the model, and here’s a list of them:

Now run the following command to create the basic_profiles table:

Selecting few attributes to add to the model, you’ll notice that the full_profile table contains many other complex objects like (publications, patents, languages, skills, etc) We are going to build separate models for a few of them. Here’s a list of them:

Now run the following command to create the full_profiles table:

Let’s add a few attributes to the model:

Now run the following command to create the positions table:

Add the association to the position model:
path/to/project/app/models/position.rb

For the Education model we have:

Now run the following command to create the educations table:

Add the association to the model:
path/to/project/app/models/education.rb

Add the association to the model:
path/to/project/app/models/user.rb

Now we have in the linkedin controller the required helper methods for authentication. We have stored the required tokens for later access, so it is time to write some helper methods to inquiry the APIs. We will use are model objects for this portion.

Querying the APIs is very simple with the gem. After authorizing the client object, you call the profile method on the object and pass whatever fields you want to get, for example:
client.profile(:fields => [:first_name, :last_name, :maiden_name , :formatted_name ,:headline])

The following methods are used to pull the data from the APIs and push it into rails models. As you can see, we are creating the object with the retrieved json object from the APIs with a few customizations.

There are a couple of examples in the gem repo on github, for example:

Let’s the put it all together and build a simple view to display for our application to display the stored data. 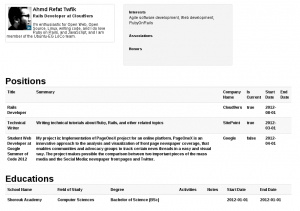 Well, I hope this tutorial to be useful, and be a good introduction to using LinkedIn gem, and the APIs in general, if you would like to suggest the next gem to cover, we’ll go for it, and thanks for reading.