After a brief flirtation with the Blackberry Storm, I’ve recently become an iPhone user — and so far, I’ve been very happy with it. But off hand I can think of at least 30 things I wish the iPhone did, could do better, or wish I could change. Unfortunately for me (or perhaps fortunately, depending on your design philosophy), Apple is a very opinionated company. They don’t really care what I think — I have to either do things their way, or buy from someone else.

But what if there was a mobile phone that encouraged user feedback from the start? Would the end result be better? Even Google’s open source mobile operating system Android was kept under wraps until it was nearly ready to ship, and the design on the hardware end of the HTC phone that first ran it was a traditionally closed process. Today, however, I read a blog post by Dwight Silverman at the Houston Chronicle about the Mozilla Phone (a.k.a. the Open Web Phone).

The Mozilla Phone is part of Mozilla Labs’ design concept series and is being led by designer Billy May. The idea is to foster a discussion with users, developers, and designers about how to create a phone that “might interface more seamlessly with users.” All are invited to participate by submitting concepts, ideas, and commenting on the design blog.

A Mozilla Phone, says May, will be all about user choice. After all, the typical Mozilla user starts with the standard IE+Outlook experience, but he or she then chooses Firefox+Thunderbird (or Gmail, or Yahoo!, or whatever).

“Without delving into actual implementation, it is obvious the hardware interface of the phone needs to empower the user through choice,” writes May. “By giving the user the means to define how he or she interacts with media, contacts and the web, the relationship between the user and their phone fundamentally changes (in a good way).” 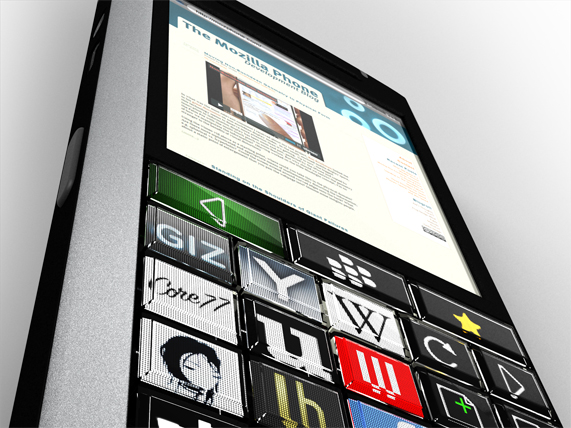 Whether the Mozilla Phone concept series actually yields anything that goes into production or not, the idea of community powered design is neat. Design by consensus doesn’t generally work — there needs to be a guiding force in the form of a core team or single person that can make ultimate decisions when necessary to prevent wild tangents, groupthink, or break deadlocks. But an open design process could yield some very cool results — who better to know what sort of things they’d want their phone do than the people who use them every day, after all?

May this week posted the first throwaway concept of the Mozilla Phone. He admits it is nothing stellar — really just a Blackberry mashed up with Art Lebedev’s OLED keyboard. Nonetheless, the point is to get a conversation going. “So where does this idea go? How can every square millimeter of a phone both input and output information to the user? How can our buttons, screens, speakers and trackballs communicate to more of our senses?” asks May.

So far, he’s received a few thought provoking replies, but for the Mozilla Phone to be a success, for it to lead to any sort of worthwhile outcome (like concepts that find their way into production somewhere), the community will need to get more involved. I’m looking forward to seeing what else comes out of May’s Mozilla Phone project.