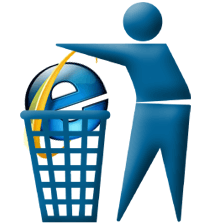 The Internet rumor mill is working overtime today. Several sites are claiming that Microsoft is on the verge of giving up on Internet Explorer or, at the very least, they will replace the Trident HTML rendering engine. I’m not certain where these rumors started, but several reference a blog article at InfoWorld.

Rumor 1: Microsoft will drop Internet Explorer
There is absolutely no evidence Microsoft is considering this. Why would they? As a product, IE is as ubiquitous as Windows.

Browsers may not raise revenue directly, but the manufacturers have immense influence over Internet users. Mozilla revenue hit $75 million in 2007 primarily because Google was used as the default Firefox homepage.

Microsoft has far more to gain: they have a wide range of products to sell, thousands of employees to pay, and millions of shareholders to satisfy. Why would they abandon IE when the majority of people still use it as their gateway to the Web? Since every OS needs a browser, what would they replace it with?

Rumor 2: Internet Explorer will adopt WebKit
This appears to stem from a quote made by Steve Balmer at a developer conference in Sydney during 2008. A student asked:

Why is IE still relevant and why is it worth spending money on rendering engines when there are open source ones available that can respond to changes in Web standards faster?

The Microsoft’s CEO responded that the question was “cheeky”, but went on to say:

Open source is interesting. Apple has embraced Webkit and we may look at that, but we will continue to build extensions for IE 8.

Steve Balmer is a successful business man, but he does not directly control Microsoft’s development teams or technical decisions. He could have stated that open source browsers were evil and he intended to wipe them off the face of the planet – but how well would that have gone down?

Microsoft are actively developing Trident and there is no evidence they intend to drop it.

Rumor 3: Internet Explorer will use “Gazelle”
Gazelle is an experimental prototype created by Microsoft. It uses OS-like resource management techniques that, in theory, could make browsers more robust, reliable and secure.

It is possible Microsoft will adopt Gazelle or some of its technology in IE. Whether than will occur in IE9 is another matter.

Do not believe the hype: Internet Explorer will be around for many years … it is taking long enough to get rid of IE6!