Live Q&A with Miriam Suzanne on Susy and Toolkits

Join Us for a Chat with an Expert!

There are so many toolkits available, and the problem is that most are loaded with features you’ll probably never use.

Miriam Suzanne and the team at OddBird saw this as a recurring problem and decided to do something about it by creating a new toolkit. Susy is a lean CSS framework (really, a Sass add-on, it’s as light as it could be) with carefully selected useful features to help you create responsive layouts.

Miriam will be joining us for our next SitePoint Community Q&A to talk about Susy and toolkits! To participate, check out the Q&A event and start entering your questions now. Miriam will be answering them at the time of the event — the 18th of August, at 2pm (PST). If you’re unsure when this is in your timezone, check out this timezone tool.

Miriam is a co-founder of OddBird, and is the author of Jump Start Sass at SitePoint. She is an artist, author, musician, and web developer, and is the creator of open source Sass toolkits like Susy, and True. She’s also contributed in the past to other open source tools such as Compass.

At the Q&A, Miriam will be taking your questions on:

Head on over to the Q&A anytime before the event and post your question(s)!

If you use Sass for your styling, and have been using CSS frameworks to create grid layouts, you should take a look at Susy. Susy is perhaps best described as an on-demand grid system. Instead of forcing you into including hundreds or thousands of lines of unnecessary code in your projects, and limiting your customization options, Susy takes a different approach and allows you to create your customized grid layouts, easily, to meet your exact needs.

Using Susy needs to accomplish something for you. Tools shouldn’t exist for their own sake – they should be included in your projects because they help. Using a fully fledged design framework could be a poor idea if all that you need is a grid system. However, if you need said grid, it can also be just as poor of an idea to write your own from scratch. There’s a middle ground.

Using Susy allows you to quickly prototype your layouts, and build out grid systems that are fully customizable – and instead of having to math out your percentages as you build your own systems, Susy will do the lifting for you.

That’s the difference between using Susy or using a fully fledged framework such as Bootstrap or Foundation – they’re really different tool sets. If you need a full framework, and take advantage of all of its various parts, assets, and features, then that tells you what tool you need! But if you find yourself simply frustrated and trying to solve your grid layout problems, you might want to take a look at Susy.

And that’s what we have Miriam here for, at this Q&A – to answer all of your questions about Susy, and development toolkits. She can talk about how to choose the right one for various jobs, and can tell you more technical details about Susy itself.

Head on over to the Q&A page and leave your questions, and join us for the live Q&A where Miriam will be around to answer them! 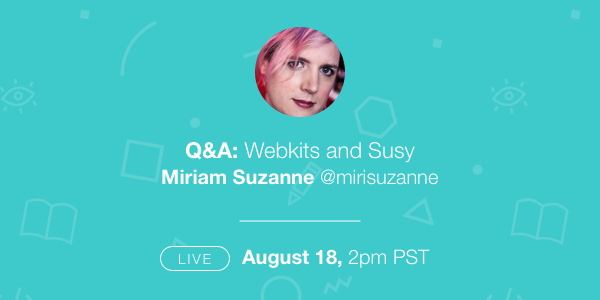 Meet the author
Jeff Smith
Jeff works for a startup as a technical writer, does contract writing and web development, and loves tinkering with new projects and ideas. In addition to being glued to a computer for a good part of his day, Jeff is also a husband, father, tech nerd, book nerd, and gamer.

Meet the author
Miriam Suzanne
Miriam Suzanne is an author, performer, musician, designer, and web developer. She has been an active member of the Sass community since developing the Susy layout toolkit in 2009. She creates web software with OddBird, music with Teacup Gorilla, novels and poetry with [WriteyWrite], theatre with Vicious Trap, and Lego spaceships with anyone who is interested.