This article was peer reviewed by Tom Greco and Marc Towler. Thanks to all of SitePoint’s peer reviewers for making SitePoint content the best it can be!

With support for the native video element and its API being fairly comprehensive, now is a great time to look at ways in which you can leverage video to create something fancy and interactive for your users.

Throughout this article we will look into the basics of the API and after we get our bearings we will work on a practical example. This will be a multi-video slider in which videos are played one after the other, seamlessly loading and animating in content as they play.

In essence when we talk about the Video API we are really talking about the Media API — a JavaScript API that allows you to interact with audio and video elements on a web page.

This API implements an interface called HTMLMediaElement which adds the properties, methods and events needed to support basic operations common to audio and video (such as loading media, changing the seek position, finishing playback etc). It is extended by both HTMLVideoElement and HTMLAudioElement which provide special properties and methods of their own.

We are mainly concerned with the video element so we will be focusing on interactions with this part of the API. To get a feel for the API you can visit the Interactive HTML5 Video Example page that showcases the most commonly used elements. 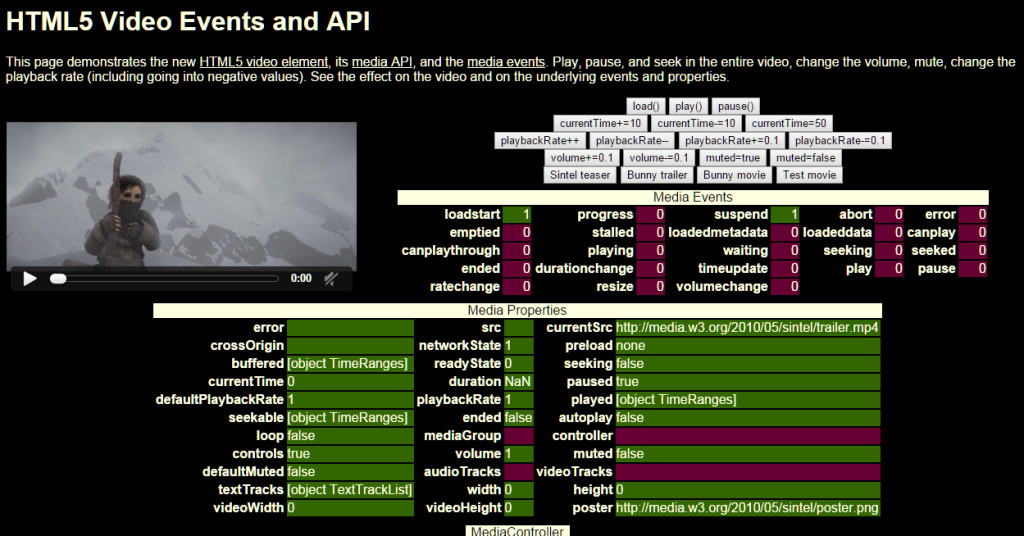 While Chrome, Firefox, Safari, Opera and Internet Explorer all support the video element, they differ in the formats they can play, each browser has a list of video formats it supports which may also be based on the version of the browser itself.

At the time of writing, all modern desktop and mobile browsers will play the mp4 format. In addition most browsers will have long support for either (or both) theogg or webm formats. Here is a comprehensive overview of the current state of support.

While you can get by with just supplying the mp4 version you should probably include both the ogg and webm formats as a comprehensive solution.

We will be creating a showcase feature using the video element. Our showcase will play a series of small video clips back to back and trigger animations at certain times. Using the video element like this we investigate some of its properties, methods and events and show the level of control you can achieve using this API. 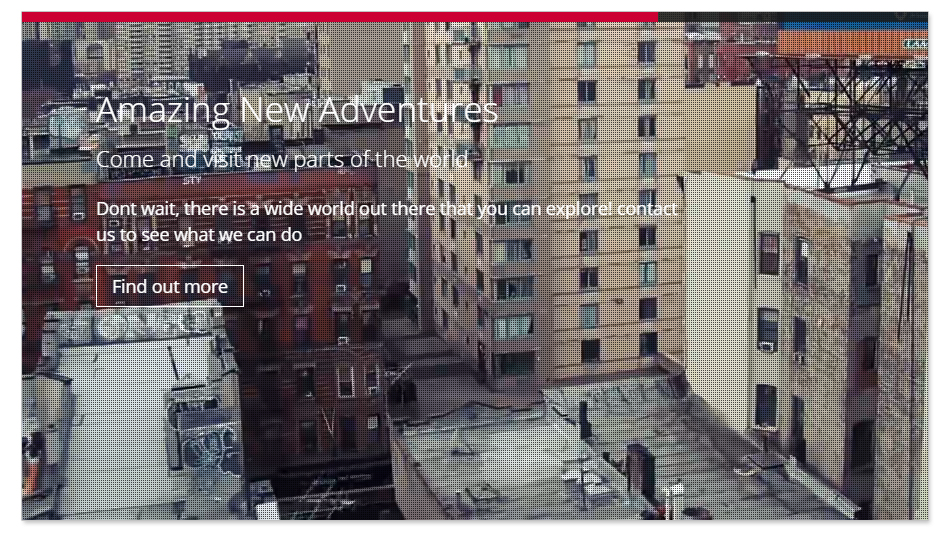 As ever, you can find the code for this tutorial on our GitHub repo, as well as a demo of the finished showcase at the end of the article.

Our slider example will play each of the videos one after the other, fading in the related captions for each video as we play. If we don’t support video playback / are on a mobile device we will fallback to a static image will caption text.

Markup for Each Video Section

For each of the videos we want to play, we will have to set up a few elements so that we can display the video, fade in the caption elements and track the video’s overall progress.

The video elements will contain the video tag with all of it’s source children set to different data types to maximize compatibility. Read more about adding support for multiple video formats.

The caption elements will contain all the markup you want to fade in as the video plays. You can add anything you want but it must have the data-animation-percent attribute with a value between 0 and 100. This will tell the slider on which percentage of video completion to fade the element in.

The progress bar displays the current video progress (in both seconds and percentage). This will be updated periodically. The bar will be interactive; When you hover over it, the video will pause and you will be able to seek through it, updating the video position.

Providing a Fallback for Mobile Browsers

To help cover all of our bases we will also set up a fallback element that will be used in case the current browser is a mobile device.

This will function in a similar way to our videos. When the user loads the page will we will trigger all of its caption elements to fade in depending on the value set in the data-animation-percent attribute. Instead of a video we are using a background image.

Our slider will be using the autoplay attribute of the video element to automatically play the first video. However, most mobile browsers block this functionality (so as to limit data usage) meaning that the best policy is to detect if we are on a mobile device and display the fallback content accordingly. Normally we would do this using feature detection, however, detecting support for the autoplay attribute is tricky.

As ugly as browser / UA sniffing may be, it will give us a way to test the current browser against a known list of mobile devices and from there detect how we should proceed. We can do this using the following regular expression:

Current and next Video Setup

Note: For the JavaScript functionality I’m using jQuery, so go grab yourselves a copy and include it at the bottom of the page.

Once we are happy we’re not on mobile we search for all of our elements with the video-container class and assign the collection to our videos variable. These elements will be the main wrappers for each video and its caption content. We then find each container’s video element and assign it to the local video variable.

Now that we have our current video, we need to find the next video element so that we can trigger it to start loading and play it when the current one has finished.

You can add as many video-container elements as you want, and define additional videos and captions. The slider will find the next video and create a loop so that it continues indefinitely.

For our first video, we need to set up a few things so we can get everything moving.

Helper Variables for the Video

For each of the videos, we need to set up a few variables that we will use later in our events

As our video plays it periodically calls the timeupdate event. We will use this event to do some of our processing:

In the callback (the anonymous function we are passing to jQuery’s on method) we want to get the current video’s time. We set the videoTime variable by finding the video’s currentTime and dividing it by its duration times 100. This will let us know percentage wise how complete the video is.

Triggering the Animation for the Caption Elements

If the current video has caption elements we will need to check the current time of the video to see if we should be making the elements either active or inactive.

Inside our function we add the following

Here’s a breakdown of what we are doing

Inside the same timeupdate event we also want to check our current video’s duration and see if we should start loading the next video.

You can see this in action in the finished demo — the next video should appear / load in the network tab of your console at around 70% completion of the current video, giving it a few seconds before the end event will trigger calling it to play.

Updating the Progress Bar during Playback

Since we want the progress bar to be updated frequently we can’t put it inside the timeupdate function (since the browser detetmines how offen it is called). We instead call setInterval and assign it to our videoInterval variable. Every 100ms we will call the updateProgressAuto function and pass in the currently playing video

Every 100ms the progress bar will need to be updated. We use this function for that purpose.

When the current video ends it triggers the onEnded event. It’s here we will switch the active class to the container of the nextVideo and then call its play function to start playback

Manually Updating the Playback of the Video

As an added feature, the slider also lets you manually seek through the video, changing it’s current playback time as you click or drag (letting you rewind or forward the video).

We bind several event handlers to the click, mousedown, mouseup and mousemove events for the videoBar variable. The purpose of this is to translate the click position / drag position of the mouse to update the video’s position.

All of these events call the updateProgressManual function, which will update the playback time of the video. The value we collect will be the current pageX position minus the current left offset of the video bar (which will give us the correct location on the progress bar)

Manually Updating the Playback with the UpdateProgressManual Function

This function is called when we are manually seeking through the current video. It’s purpose is to get the position that was clicked and convert it into the time that the video should seek to.

Here’s a breakdown of what’s happening

The slider also has a few other features that you might find useful.

When the videoBar intersects with our mouse we expand the progress bar to make it easier to click on / drag (to seek the video). In addition we also pause the video and activate our overlay. When the mouse moves away it all reverts back, starting playback and removing classes.

We also check if you move your mouse onto the caption area and its elements. If the caption is currently active it will slow down the video via the playbackRate property (making it play back half as fast). When we move the mouse away the video returns back to it’s normal speed.

If we’re on a mobile device we won’t be showing our videos, instead we will show the fallback content. You can test this in the demo by setting the mobile variable to be true.

The majority of the functionality is similar to how we have processed each video. We look for all of its elements and then determine when they need to be faded in. 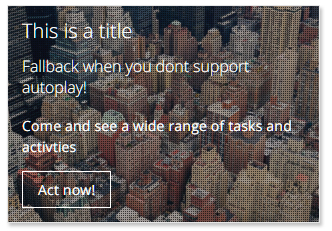 And finally, here’s a demo of the finished showcase. You can click on the video to toggle playback.

Where to from Here?

Now that you see how the Video API can be used to create interesting elements you can take the example code from this and expand it to make it even more awesome.

There are plenty of things that you could do to improve upon this, here’s some of them:

If you end up creating something great feel free to share it with us, I’d love to hear from you in the comments below.

How to Create a Showcase with jQueryTim Smith