Microsoft has reported 27 downloads per second since IE9 was released last week. I don’t doubt it: the browser received a lot of publicity and the company has pushed it hard. I’ve been using IE9 for the past 7 days. Is it good? Has it become my default browser? Read on…

Microsoft has followed Chrome’s lead with a small 530KB browser download. On installation, this requests a further 20MB which will take around 5 minutes on a reasonable net connection.

Microsoft tried hard to remove the reboot which has been a requirement since IE4. They succeeded … to an extent. The IE9 installer will ask you to shut down almost every application — including other browsers and background processes. For me, a reboot was easier.

In all, a full download, installation and reboot took less than 10 minutes. That’s not as quick as its competitors but it’s not outrageous either.

The interface has changed little since the first beta but existing IE users will be shocked by the sparse layout: 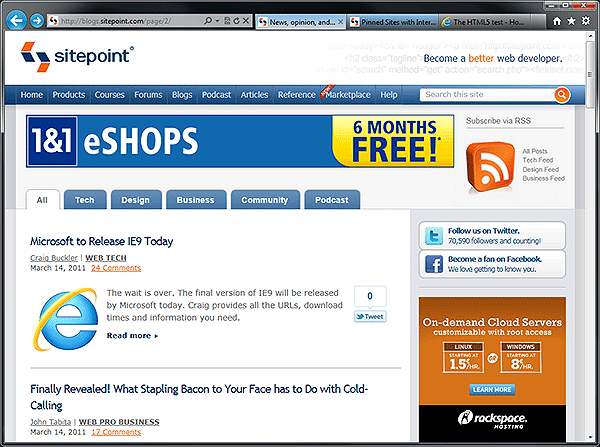 A default installation has a single tool bar comprising:

Like Chrome, IE9 does not show the page title in the application’s title bar. There’s room but Microsoft have opted for simplicity.

If you love IE7 and 8 (there must be someone?!), you can re-enable the menu, Favorites, Command and Status bars. They look awful in the new interface and there’s little reason to use them … unless you require RSS. IE9 supports RSS and provides a good internal reader but Microsoft has demoted it to a secondary feature. That’s probably a wise decision — most users wouldn’t know RSS if it slapped them across the face with a moist haddock.

IE9’s interface is functional but it’s quite square and angular. It’s not ugly, but it doesn’t look as good as Chrome or Opera.

Microsoft has not overloaded the browser with new features. It finally has a download manager, offers improved privacy protection and ActiveX blocking (does anyone still use ActiveX in 2011?)

As you’d expect, Windows 7 integration is excellent. You can pin sites to the taskbar or start menu, use jump lists, Aero peek and window snap. Pinned sites are effectively shortcuts to web applications which open their own IE window. Ricky Onsman recently wrote a great Windows 7/IE9 developer goodies tutorial. There are some good features but I doubt many developers will have the time or inclination to use them unless other browsers implement similar functionality.

IE9 can also display an “about:Tabs” page when starting the browser or opening a new tab: 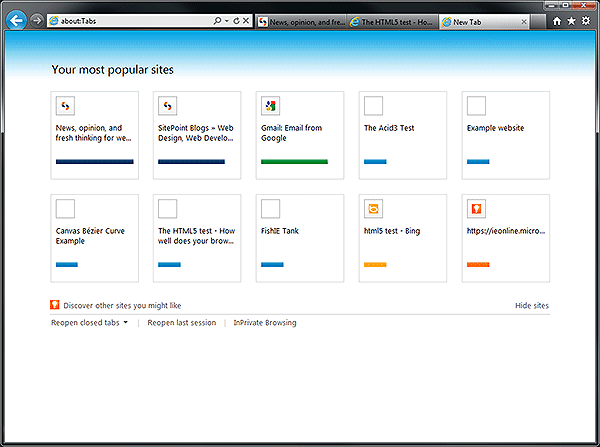 Again, it’s functional rather than good-looking — Chrome, Safari and Opera are prettier. Irritatingly, IE won’t automatically open the last browsing session. There’s a “reopen last session” link but that requires an extra click. I suspect it’s been omitted to ensure IE opens quickly, but it’d be great to have the option.

IE’s add-ons remain disappointing. The majority are corporate shopping toolbars rather than useful tools or functionality enhancements. Despite being one of the first browsers to offer extensions, IE’s development model remains entrenched in Visual Studio rather than web technologies. By contrast, Opera has supported HTML and JavaScript-based extensions for a matter of months and offers a more diverse range of useful add-ons.

If you only care about raw speed, IE9 is the browser for you. Who cares about questionable benchmarks — IE9 starts quickly and runs blazingly fast. Try the FishIETank demonstration. The page has been developed to show off IE’s prowess, but it’s noticeably faster than Chrome or Opera.

You can use a slower-running software rendering system if you experience hardware acceleration problems. I can’t resist another dig here. One of the primary reasons Microsoft dropped IE9 on XP was because it didn’t offer the same level of hardware support. So why couldn’t IE revert to software mode on the older OS?

Microsoft is committed to HTML5 and IE9 scores 95/100 in the ACID3 test and 130/400 in the HTML5 test. That may not sound particularly impressive, but it’s a huge leap from IE8. IE9 developers can finally adopt native SVG, canvas, offline storage, geolocation, audio, video and CSS3 rounded corners!

There are a number of strange omissions such as the CSS3 text-shadow property. Other browsers have supported this without a vendor prefix for many years and it’s been available as an IE filter effect for a decade?

The new browser is unlikely to pose as many development challenges as it’s predecessors. Your site will almost certainly work if it currently supports IE8, Firefox, Chrome and Opera. I’m yet to see a site break but it’s early days and problems will eventually surface.

IE9 is heading in the right direction. Let’s just hope Microsoft continue to extend the feature set with frequent updates. Microsoft — if you’re listening — I vote for HTML5 forms and JavaScript web workers!

IE9 retains the F12 Developer Tools dialog and there’s a new Network tab. Unfortunately, it’s clunky compared to Firebug, the webkit inspector and Opera’s Dragonfly. That’s surprising when Microsoft creates some of the best development tools in the IT industry. But let’s not be too harsh; the Developer Tools are a godsend if you experience IE-specific issues.

As well as IE9’s default rendering, the browser supports IE9 compatibility mode, IE8 mode, and IE7 mode. Each one can switch between standards and quirks view. It’ll give your test team hours of fun!

I have mixed feelings about the legacy emulators. On one hand, it’s great you can test a site in IE7 and IE8 without running a VM. On the other, you cannot rely on the modes to replicate IE7/8 identically … and why the hell are we still testing a 5 year-old browser?!! I hope Microsoft are able drop the rendering modes in the near future but, for the moment, a huge number of people continue to use IE6, 7 and 8.

There’s one final niggle. IE’s always offered fantastic XML support but you may find it’s broken in IE9 and files are rendered as plain text without validation. This fix might help: click Tools > Manage Add-ons > choose “All add-ons” > locate “XML DOM Document” > click the Disable button, then Enable it again. To see validation errors, you need to switch to IE9 compatibility view. Ugh.

Overall, IE9’s positive points outweigh the negative ones. Microsoft has produced a great, modern browser which will please web novices and developers alike.

Existing IE users should upgrade immediately (assuming they’re not using XP). Developers should install it too, but only if you have access to IE8 — that’s likely to remain the predominant version for several years.

I like IE9 but, for me, there are few compelling reasons to adopt it as my full-time default browser. It’s great for quick browsing and it’s hard to fault its speed but I can’t help thinking Microsoft has sacrificed functionality for performance.