This article was originally published by SlashData. Thank you for supporting the partners who make SitePoint possible.

For the first time in our Q2 2019 Developer Economics survey, we tried to introduce developers in their own words by asking them about how they see themselves.

We provided a set of 21 words and asked them to choose up to five to form a word sketch of their personality. We also gave them the opportunity to provide their own text description.

Here’s what we got: 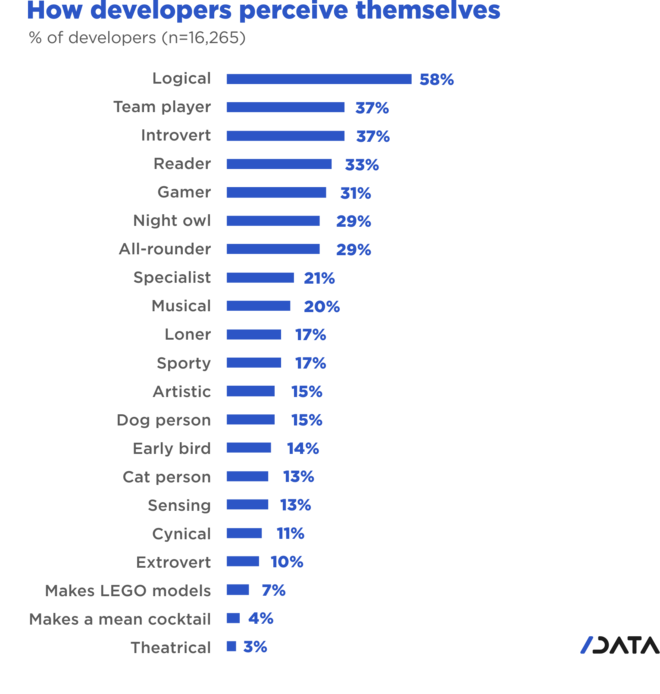 Over half of the developers say they are logical

Perhaps unsurprisingly, nearly six out of ten developers say they are logical. And as it turns out this is the most popular choice of description across all software development sectors, except in games development. Next in line, but some way behind, are the descriptors team player and introvert at 37% each. By comparison, just 10% label themselves as an extrovert. But can you guess which programmers consider themselves less introverted? Those involved in the AR/VR and IoT sector. Interesting, right?

Moving on to a slightly more unusual pair of labels: there are slightly more dog lovers than cat people in the developer population, although the numbers are close at 15% and 13% respectively. A much greater difference seems to exist though between developers working at night (night owls, 29%) and those who prefer the fresh morning breeze (early birds, 14%). 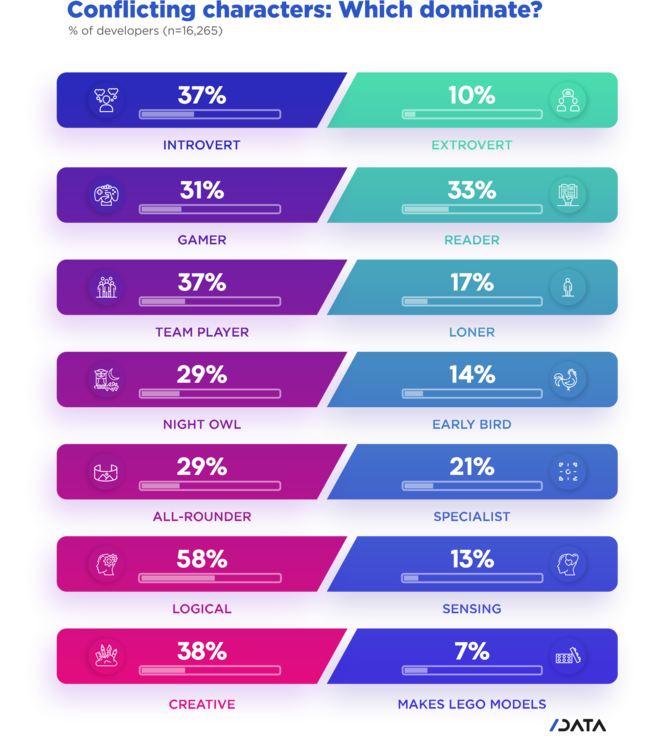 What about hobbies and spare time?

Other activities such as music and sport score lower, at 20% and 17%. A low 7% make LEGO models, although the popularity of LEGO seems to be very much dependent upon age. A respectable 12% of developers under 18 make LEGO models, but the proportion halves to 6% within the age group 18-24.

What about the artistic ones?

Lastly, in out Q2 2019 Developer Economics survey, a few programmers were confused as to why we were asking the question and pondered if we were trying to set up a dating site. Well, we weren’t! We were collecting the data to create the State of the Developer Nation Report, 17th Edition.

Interested in joining forces with 40,000 developers worldwide in shaping the future of the developer ecosystem? Take our survey.