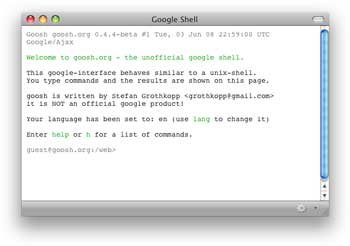 I love the command line.

Sure, the WIMP paradigm brought the personal computer out of obscurity and into the hands of less technical people. But if you ever need to find out what’s really going on, there’s only one answer — cast aside the pretty icons, dropdown menus, tabs and OK/Cancel buttons and head straight for the command line.

The power of the prompt is unparalleled, and it doesn’t matter whether you’re running Windows, Mac or UNIX/Linux. From the command line, you can monitor system processes, poke around in directories that are normally hidden from view, fix permission issues that your OS’s graphical interface screwed up. There’s a learning curve, of course. But once you’ve committed a reasonable number of useful commands to memory, the speed with which you can perform these tasks is far greater given that your fingers don’t need to leave the keyboard once.

Which is why, I suspect, that Stefan Grothkopp created Goosh, “the unofficial Google shell.”

Goosh is an Ajax-powered web application that provides a command line interface to Google, and it’s quick. A command line interface to Google is not something entirely new (YubNub and Firefox’s own keyboard shortcuts come to mind), but it functions just like a command prompt, and has even aliased a bunch of UNIX commands for those command-line fans who forget that they’re not actually interacting with a real UNIX shell. And did I mention it’s fast? The result is a terrific and very usable way to perform quick searches on everybody’s favourite search engine.

To take things one step further, it took me, oh, about five seconds to create a Mozilla Prism app for Goosh (as displayed in the image above). Ahhh … the migration of my interaction with Google from the Web to the desktop is complete.