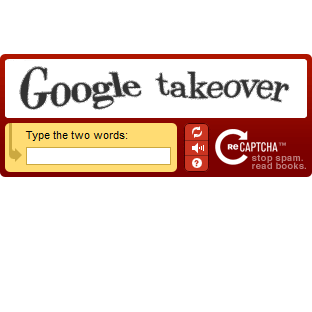 Google has acquired reCAPTCHA Inc, the company that developed the popular spam and fraud prevention system.

CAPTCHAs (Completely Automated Public Turing test to tell Computers and Humans Apart) are the squiggly letters or words you must read and enter when completing a web form. They’re a hindrance and are ultimately doomed by computer advances, but they can help sift the spambots from real human users.

reCAPTCHA has been implemented on 100,000 websites. It’s one of the better systems and many would say it’s the best:

reCAPTCHA is also unique because it improves the process of digitizing books and other paper-based documents. The widget presents the user with two scanned words that failed optical character recognition (OCR). One of the words is known but the other requires further human verification. If the user solves the known word, reCAPTCHA assumes the second word is probably correct. The system can verify the word with a high level of confidence if several users enter the same text.

reCAPTCHA is a positive example of crowd-sourcing: it distributes a laborious process among millions of users. Books are digitized quickly and accurately, developers can be sure a real user has accessed their site, and user inconvenience is kept to a minimum.

The deal is a win-win for both companies. reCAPTCHA will benefit from Google’s financial and marketing clout. Google can replace their awful in-house CAPTCHA system and use reCAPTCHA’s digitizing facilities to assist with their ambitious and controversial book-scanning project.

Neither company has revealed the full terms of the buyout, but Google is unlikely to receive much change from $500 million.

Do you use reCAPTCHA? Does this deal make us ever-more reliant on Google services?