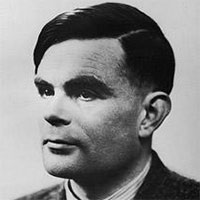 Almost 60 years after his death, the UK Government has apologized for how Alan Turing was treated after World War II.

Turing is widely considered to be the father of modern computing. He was the first person to propose the notion of a “Universal Turing Machine”; a single device that could perform the tasks of many others. We now refer to it as machine that is programmable — Turing invented the concept of software and many of us owe our livelihoods to his foresight. He was also responsible for the Turing test; an assessment of a machine’s ability to demonstrate intelligence that is still referenced by AI researchers today.

However, Turing was best known for his cryptanalysis work at Bletchly Park in the UK. He contributed several ideas that helped the British Government translate Enigma machine messages sent by German naval intelligence. His work with Tommy Flowers resulted in Colossus, the world’s first programmable electronic computer.

Bletchly Park projects probably shortened the war by several years, but Turing’s work remained secret until the 1970s. Although he was awarded the OBE for his services during the war, the UK Government ordered the destruction of all computing equipment and research notes.

Turing was homosexual and lived at a time when it was illegal and considered to be a mental illness. In 1952, he was convicted of “gross indecency” and sentenced to a choice of jail or chemical castration. He chose the latter and, two years later, died of cyanide poisoning. The coroner’s official verdict was suicide, but there is speculation regarding the possibility of assassination owing to Turing’s sexuality being perceived as a security risk.

A recent petition posted on the Number 10 website received thousands of signatories demanding that the UK Government apologize for Turing’s treatment. The British Prime Minister, Gordon Brown, has released a statement that includes:

…his treatment was of course utterly unfair and I am pleased to have the chance to say how deeply sorry I and we all are for what happened to him.

On behalf of the British government, and all those who live freely thanks to Alan’s work I am very proud to say: we’re sorry, you deserved so much better.