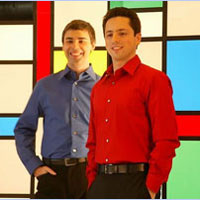 The world’s most powerful brand is turning 10 years old this month, and Google today launched a web site to celebrate its first double digit birthday. The 10th birthday site, which is currently linked from the main page at Google.com, features an interactive time line detailing Google’s history.

The time line, which is actually a visual representation of the milestones page from Google’s corporate information site, details the company’s history from Larry Page and Sergey Brin’s fortuitous meeting on the Stanford campus in 1995, to Sun co-founder Andy Bechtolsheim’s initial $100,000 investment, through their 2004 IPO, and this July’s announcement that Google now recognizes over 1 trillion unique URLs.

The site also gathers and links to all of the ten years out blog posts that Google published this month to celebrate its birthday, in which its top engineers and executives predict what the web might look like ten years from now. While none of the content is really new, the presentation is nice and it’s fun to scan through the time line. I definitely picked up some tidbits about Google’s history that I either didn’t know or had forgotten.

Perhaps the bigger piece of Google’s birthday celebration, though, is the launch of Project 10100. Project 10100 is “a call for ideas to change the world by helping as many people as possible.” Google is committing $10 million to fund five ideas that its advisory panel and the public think will have the biggest impact on the world.

Google is calling for idea submissions in eight categories including energy, environment, education, and health until October 20th. Google employees will then choose their favorite 100 ideas and the public will vote for the top twenty. An advisory board will then select the top 5 ideas sometime in early February of 2009.

Google says it will evaluate ideas based on the following criteria:

The winning ideas will get some portion of the pledged $10 million (Google doesn’t say that each idea will get the same amount) and Google will decide which organizations or individuals are best suited to implement the idea. That’s likely not the person who submitted the winning suggestion, though — so, Project 10100 isn’t a way to get funding for your altruistic/non-profit idea.

Why is Google doing it? According to them, they believe that “helping people is a good thing, and empowering people to help others is an even better thing.” Plus, they have to do something with all that money. (Cynicism aside, this is a really cool project.)

Below is a video from Google explaining the project: