Firefox 16 was released on October 9, 2012. Has it really been six weeks since I reviewed Firefox 15? If you managed to upgrade, you were in the minority; Mozilla pulled the download a day later…

Firefox 16 introduced a security vulnerability which allowed a malicious site to examine your history and extract URLs and parameters. Nasty. No one is known to have exploited the bug, but Mozilla took the unprecedented step of removing version 16.0 from their servers and recommending users downgrade to 15.0.1.

Fortunately, Firefox 16.0.1 was released on October 11. If you’ve not upgraded, stop reading this and do it now!

Firefox has been evolving at a rapid pace. While there are few obvious changes for Mr and Mrs AverageWebUser, Mozilla has added several great tools and updates for developers.

Fed up typing -moz prefixes? If you’re not using LESS, Sass, Stylus or another CSS pre-processor, you’ll be pleased to hear that Mozilla is the first vendor consider CSS3 animations, transitions, transforms and gradients stable enough to become un-prefixed:

You won’t be able to abandon -moz properties until everyone’s upgraded to version 16+, but I expect the other vendors will follow soon.

Until Firefox 16, the only way to reverse an animation was to define a new set of keyframes which operated in the opposite way. Fortunately, the animation-direction property now accepts the following values:

You can also mix directions, e.g.

This update is likely to appear in Webkit shortly. 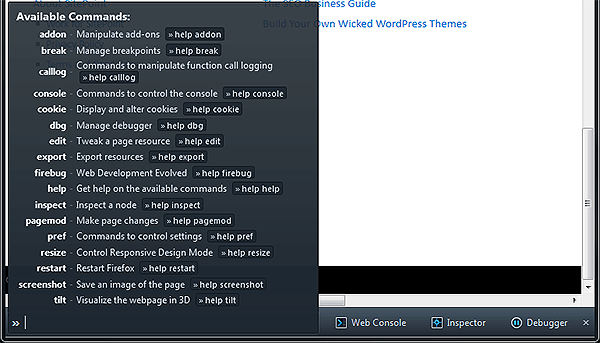 It features links to the inspector, debugger (see below), console (the number of errors are displayed) as well as a command line. Type help for a full list of commands, e.g. edit styles.css 123, console clear, restart etc. Handy for those of us too lazy to reach for the mouse.

You’ll be pleased to hear Mozilla has fixed the problem where breakpoints were removed on page refresh, which meant you couldn’t analyze start-up code. It works and looks great. I’m not convinced it’s better than Firebug yet, but will evaluate it over the coming weeks.

A couple of new W3C APIs have been implemented in Firefox 16, although they’re primarily of use to mobile developers:

Neither API requires the -moz prefix.

Firefox has received updates in readiness for the Mozilla Marketplace (or AppStore if you prefer, but that’ll cause no end of legal shenanigans with Apple and Amazon). With a little effort, you can turn your website into a commercial App which can be promoted in the Marketplace, installed via Firefox and run offline.

It’s a little early to start planning your business strategy — the Marketplace isn’t available yet — but Mozilla has provided preliminary App documentation on MDN.

Here are the other highlights in no particular order…

Mozilla’s pace of innovation is impressive. If you’ve migrated to another browser, I recommend you re-evaluate Firefox 16. The development tools alone are worth the download.