Kinetise is a SaaS platform for building complex mobile applications. It compiles native apps for Android, iOS and Windows Phone from a single design and there’s no coding required – everything is achieved through a GUI. 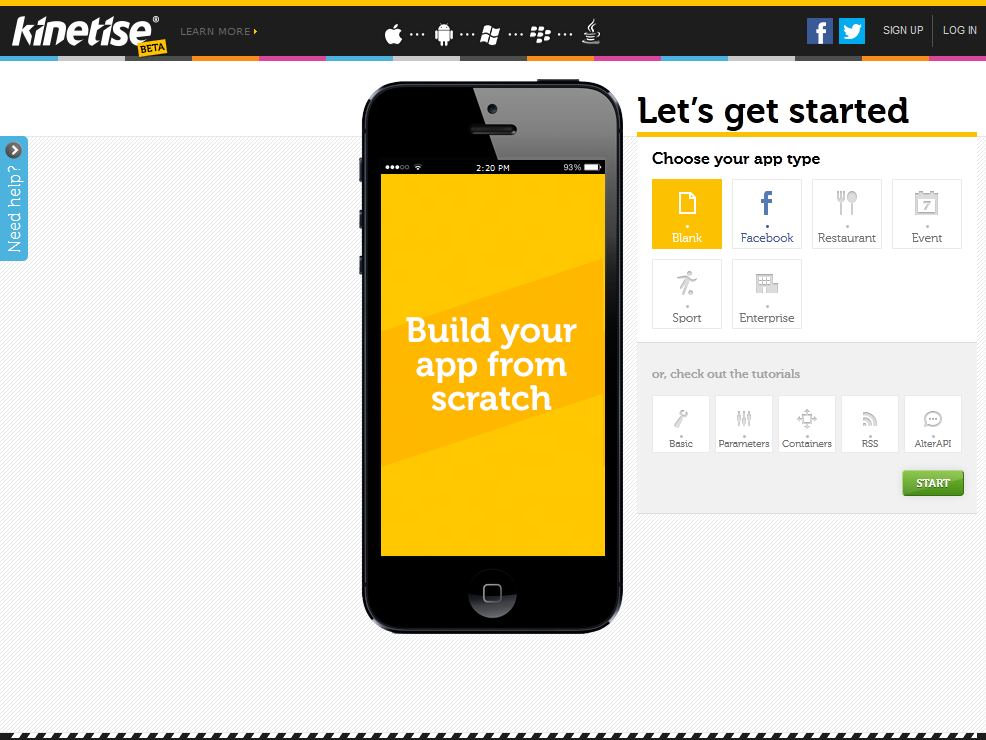 Kinetise’s creators are keen to get you started immediately; the home page offers a single button that takes you straight to app creation. From there, you can start from a blank canvas, or walk through the Wizard tool if you want a demonstration of what Kinetise is capable of. Creative types will enjoy the sandbox feel of starting with a blank app, but there is a range of tutorials available if you need a more detailed approach to learning. If you use the Wizard, you’re still given the opportunity to tweak and customize using the full power of the Editor – you’re not stuck with a template design.

The Editor itself should be fairly intuitive for anyone with a modicum of experience with graphic design programs such as Photoshop or GIMP. The toolbar is filled with widgets that users can drag and drop onto the phone’s screen to add functionality. These can then be customised via the tabbed settings windows, granting the user full control over both the widget’s operation and its visual appearance.

The simplest elements are the most essential, and Kinetise’s toolbar offers standard text and image widgets to get content on the screen. These are complemented by widgets serving rich content such as image galleries and a video player. Social networking buttons and an array of form submission tools are available to receive content from your users. Widget content can be manually entered (by typing in text or uploading your own pictures), or dynamically retrieved from a URL or RSS feed. 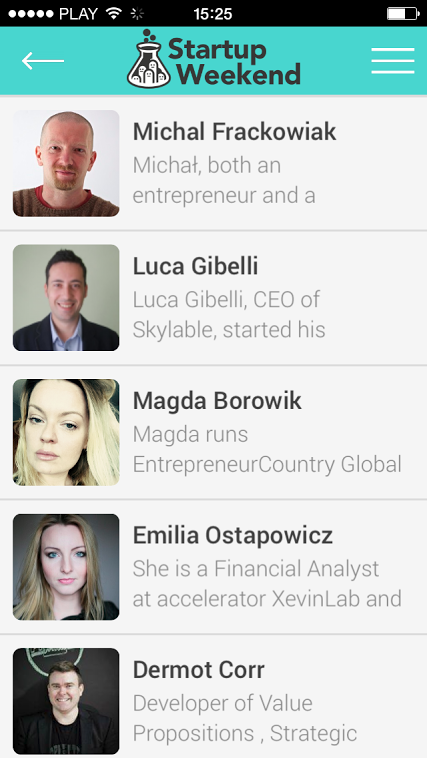 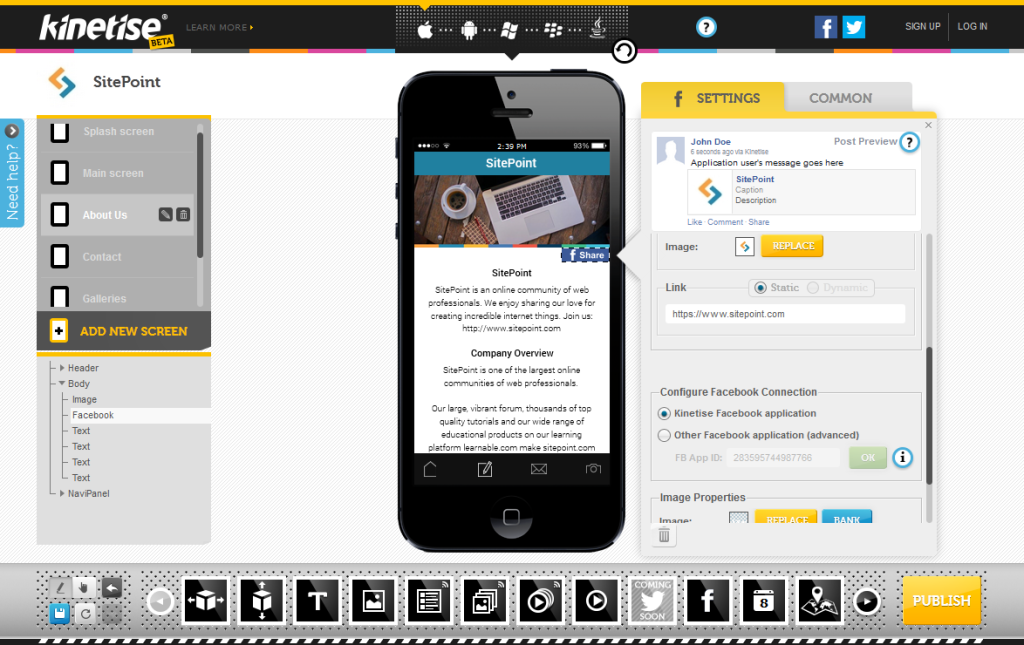 Designing your app screen is just as important as the functionality. Kinetise uses a pair of widgets known as Horizontal and Vertical containers to organise your screen layout. Nesting content widgets inside these containers lets you build your screen like a table using columns and rows, with Margin and Padding options that can then be set to nudge each widget into place. You will find all the standard settings you would expect such as background color and borders to suit your particular design aesthetic. Settings can be copied from widget to widget to maintain your style, or duplicated completely using Kinetise’s Clone tool. 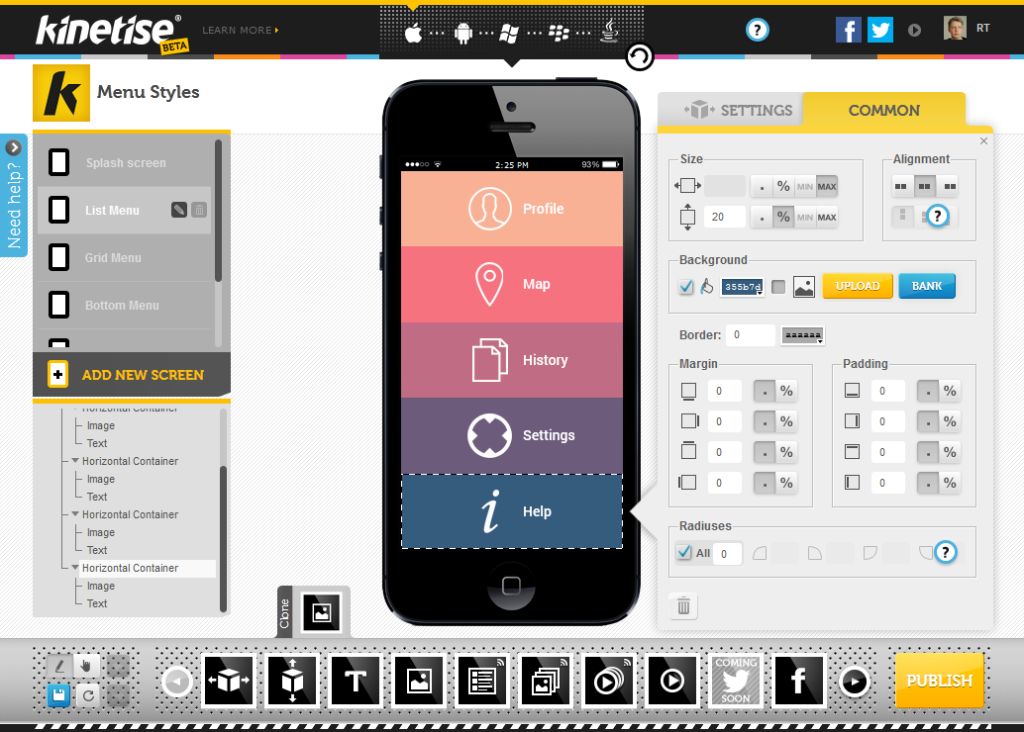 The build process is immediate since Kinetise doesn’t need to compile designs to test them. Changes to settings are applied in real time so that you can tweak your layout, and you can then switch to the Emulator mode to test your on-screen features. You can move between platforms instantaneously to see how your design looks on iOS, Android or Windows Phone. Kinetise state that this is one of their key paradigms – that a single design should look great on every device, no matter the platform. To that end, they introduced a custom design unit, the KPX (Kinetise PiXel), to facilitate screen layout. 1 KPX is 1% of the phone screen’s shortest side; a simple solution that removes the cropping and stretching issues inherent of cross-platform layouts.

Kinetise offers support for backend systems. Known as the AlterAPI, it enables two-way communication between the mobile app and the creator’s own servers. This allows for form submission, data feed retrieval and user authentication. Setting up a backend server for the API may be beyond the scope of a novice user, find full specifications can on the Kinetise website.

App creation platforms could never hope to match the versatility of coding your own design from scratch, although Kinetise is a convincing alternative. It’s not a tool aimed at coders – there’s no access to the source code and no input for custom scripts. Instead, it’s a platform aimed at entrepreneurs who want to bring a working app to market without the usual lengthy development process. The price of $999 per app (which includes submission to both Google Play and Apple app stores) works in Kinetise’s favour compared to the cost of a traditional development team.

Kinetise launched as an open beta a few months ago, and has already won a handful of awards including the IBM Smartcamp Europe award. User accounts are completely free, find out more at www.kinetise.com and let us know how you think the service compares to similar offerings.

Founder and co-owner of "FUN and MOBILE" and "Kinetise". Evangelist of mobile marketing and mobile apps in Poland. He has in-depth understanding of mobile media ecosystem, marketing activities and IT development processes. He has lead software projects launched in 50+ countries worldwide.