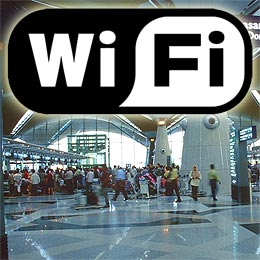 A recent survey of airline travellers found that 47% of respondents considered Wi-Fi to be the most important airport amenity. Bizarrely, it beat basic travel needs such as food by almost 30%!

If we look a little deeper, we discover that the survey data was gathered by American Airlines and Hewlett Packard – hardly the most unbiased of partners. The study was also restricted to 1,500 business travellers who made at least 20 trips per year on three or more airlines. I suspect parents of kids screaming for fast-food would have a wildly different result.

However, whilst the outcome should be treated with a degree of scepticism, it does indicate that there is a genuine need for universal Internet access. Instead of waiting several hours for a flight, business users can catch up on emails and other work. It certainly beats traipsing around the endless circuit of shops with useless goods that would not sell anywhere outside of an airport.

The survey also found that the largest complaint wasn’t delayed flights, cramped conditions, or exorbitant food prices: it was dead laptop batteries. Over 41% complained of dead batteries and 26% complained about the lack of power outlets both in the airport and on the plane itself.

Let’s hope the airports and airlines take notice and implement proper free wi-fi rather than non-existent or expensive access points.