8tracks, a new online mix-tape/web radio-like service that will launch on Friday, allows users to upload music and create 8 song mixes that can be shared with other users. Founded by former Live365 general manager David Porter, 8tracks is taking pains to offer their service legally. Competing services, like Muxtape, don’t really seem to make much mention of the legal issues involved with letting users upload and share tracks.

8tracks operates under the compulsory license for webcasting established by the 1998 Digital Millennium Copyright Act in the US. The company pays royalties under the license to SoundExchange and agrees to follow certain rules restricting the number of times a song from a single album or artist can be transmitted from the same mixtape over a three hour period. Additionally, 8tracks has public performance licenses with ASCAP, BMI and SESAC.

8tracks also capitalizes on a “loophole” in copyright law, according to VentureBeat that allows music to be streamed online as long as the listener doesn’t know what’s coming next. So 8tracks can allow users to create 8 song mixes and then streams them in random order. 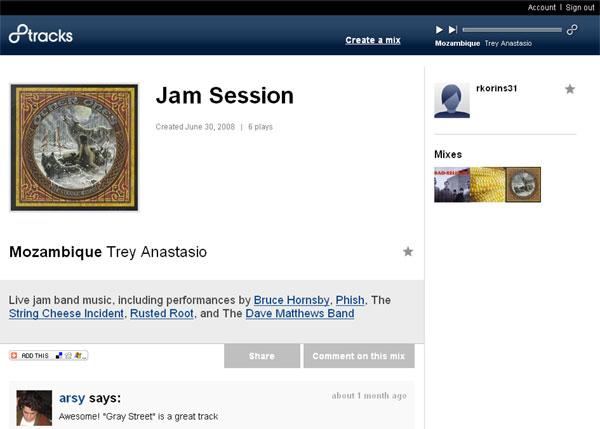 Users are allowed to share mixes, rate them, comment on them, and remix them by adding tracks from a mix to a “favorites” list which can then be used as fodder for future mixes. The interface is simple and easy to use, and a little slicker than similar services, like the aforementioned Muxtape.

So how much does keeping 8tracks legal cost? According to the site’s legal page, they will need to average a $20 CPM on ads ($30 in 2010 due to license rate increases) in order to break even — and that doesn’t include royalties paid to ASCAP, BMI and SESAC. 8tracks will be attempting to cover their costs primarily with advertising, and will eventually add “buy it from Amazon” links and premium subscription options as well.

It’s hard to say if that will work, but because I’ll wager most Internet radio listeners put on the web radio station of choice and then minimize the window and listen to music in the background while they work, it’s doubtful that 8tracks will have a very engaged audience for traditional web ads. The VentureBeat write up also mentions audio ads, though, which could work better.

If labels were smart they would see the opportunity in services like this to spread new music and would cut deals with sites like 8tracks and Muxtape to highlight tracks from their new artists. I still listen to artists I initially found after they were featured on Napster or MP3.com — it’s amazing that labels still haven’t figured out the power of exposure after all these years. There’s no way I’d own 3 Lemon Jelly albums, for example, if I hadn’t found them years ago while browsing tracks on the original Audiogalaxy back in high school.