Ever wished that someone would overlay some data that fascinates you on a Google Map? Ever have an idea for a new desktop widget to take the computing world by storm?  Well, no matter what your skill level is, there are tools out there in the world that will help you realize your dreams just by dragging-and-dropping what you need and in the order you want it.

Take a look through these ten solutions — which range from common, everyday type of Google Maps mashups to heavy-hitting, enterprise-level applications — and be amazed at how very little work can bring big results.

DevHub: A point-and-click solution for developing a site, with monetization in place from the day you open it up.  The themes are customizable, so your site needn’t be immediately recognizable as being from DevHub; there is some branding indicating that your site is a DevHub site, but it is pretty unobtrusive. DevHub is the perfect solution for people who have an idea for a site, but have no clue how to even begin coding (read Craig’s coverage on SitePoint). 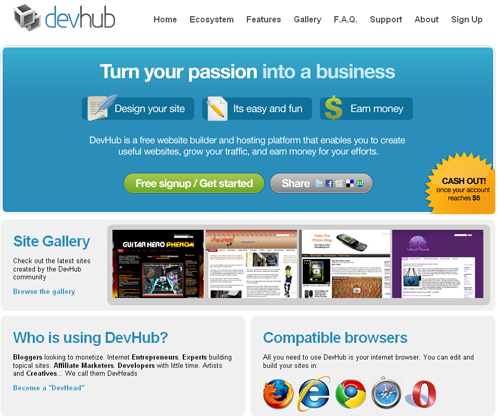 Iceberg: Iceberg is a business development application tool that operates completely within a visual editor, allowing anyone to build and launch an application for their employees.  You can build just about anything with it, and the service is available for free to non-profit groups and companies with less than five employees. 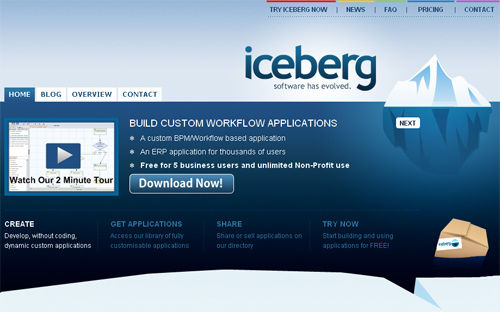 IBM Mashup Center: The IBM Mashup Center comes packed with features, but is not too overwhelming for non-technical users wanting to create new tools.  It allows you to create widgets for various mashups and to build pipes to bend information into a way that is more usable to you. The Rapid Assembly tool allows you take widgets from just about anywhere on the Web and drag-and-drop them to form an entirely new creation of your own.

JackBe: JackBe is a mashup builder with a enterprise slant to it.  Using their Presto Mashup Composer — a web browser-based visual mashup composition tool — both business-oriented users and IT-savvy developers can produce a whole bevy of mashups to serve both the company and its customers.  The tool works as an Eclipse plug-in for Java development that will allow you to design, test, debug and deploy mashups. 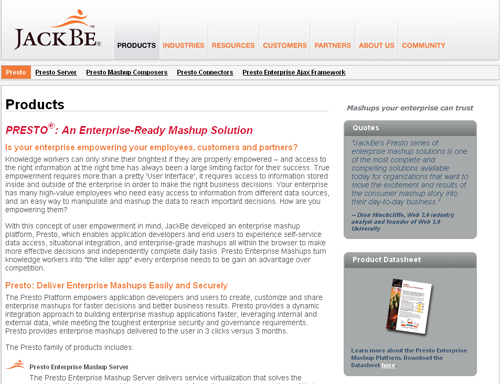 Ning: Although there are hundreds, if not thousands, of stand-alone social networks in the world already, someone has to build one dedicated to people who collect matchbooks.  This is exactly the problem Ning attempts to solve as it is dedicated to letting you set up a social network in moments that is dedicated to the subject of your choice.  When a person first sets up their network, which only requires you to answer questions, it will be supported by advertisements controlled by Ning. This can be turned off by paying a monthly fee, and there are other levels of monthly subscription if you need more features, like additional storage, more bandwidth or a unique URL. 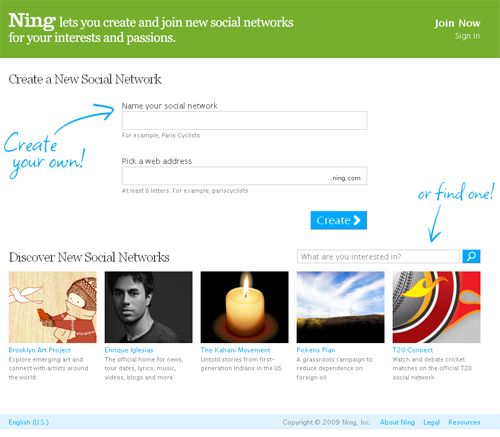 OpenKapow: OpenKapow will allow you to remix just about any web service you can think of and bundle them into a widget to be shared with others.  Want to know where a phone call came from geographically?  Enter the number and YellowPages.com will display the location on a Google Map.  While this is a simple example, the possibilities here are pretty much endless, and the path to creating to a finished product couldn’t be simpler. 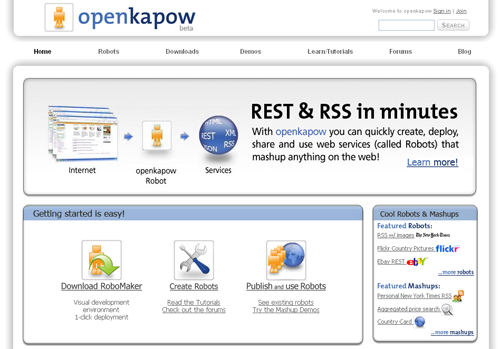 Pipes.deri.org: Deri.org admits they were inspired by Yahoo Pipes, but it certainly looks like they learned from the big Y and changed things up enough to keep it interesting.  You can pull in information using RDF, XML, Microformats, JSON or a binary stream and then output it in XML, RDF or JSON.  You can choose to use the finished product as a stand-alone site, or it can be embedded it into an existing application. 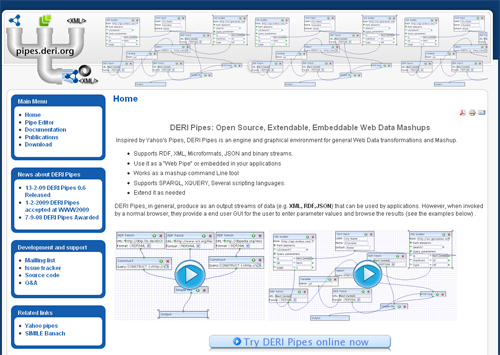 Tarpipe: Tarpipe is another pipes-style solution for remixing various content into one application or destination, but there are a few points of difference from competing solutions.  While at its core, the Tarpipe solution is all about making mashups of various online services, you can also trigger processes by e-mail messages, instant messaging updates and third-party applications.  You can also easily share your completed projects on sites such as Evernote, FriendFeed, Flickr and Twitter.

WaveMaker: WaveMaker offers both a desktop application and a cloud-hosted version that provides the ability to drag-and-drop items to create complex applications without coding.  Wavemaker is also available in an enterprise version for those who are ready to take their next big thing to the next big level. 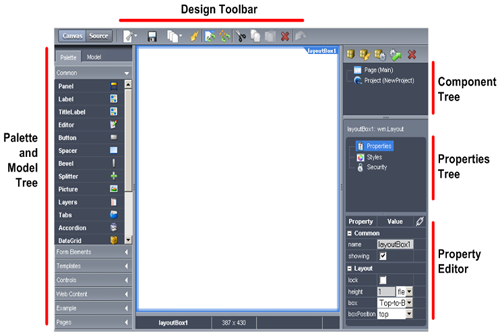 Yahoo Pipes: Yahoo Pipes is a product from Yahoo that is dedicated to nothing but helping you build mashups from just about any source that has some sort of feed.  Suppose you wanted to view a visual representation of the population of the United States — all you have to do is drag and drop some modules into the pipe, enter the data from the feeds to be filtered the way you want to see it, and you’re done.  There’s no hard coding — just filling in feed information and checking some boxes.  The finished products are all hosted on Yahoo and can be shared with anyone. 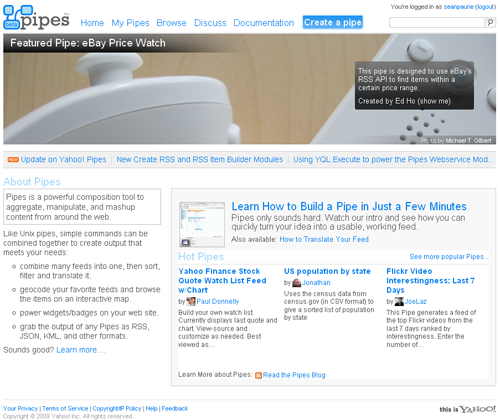 Don’t let your lack of coding skills prevent you from building the next big thing!