Microsoft Windows 7 received a relatively understated launch on 22 October 2009 following many months of public testing. The OS has been selling well — or at least far better than Vista. I suspect you’ve read many reviews, but few are based on using the OS for development during a considerable period.

These are my experiences with the final version of Windows 7 Professional 64-bit. The article is split over three parts. Today, we look at installation and the interface. Part 2 covers productivity, software and security. The final summary addresses performance and the future for Microsoft and Windows.

Compared to previous editions, installing Windows 7 is a breeze. You can upgrade from Vista, but I wouldn’t recommend it. Take the opportunity to de-clutter, perform a clean installation and get rid of the dross the manufacturer helpfully installed. Just make sure you’ve backed up your data and have copies of all the software you need.

Two DVDs are provided for the 32-bit and 64-bit versions. Most PCs less than a couple of years old will support either version, but you should check. The 64-bit OS is the future and many OEMs are installing it by default. However, you’re less likely to encounter confusing compatibility issues with the 32-bit edition … more about that later.

Windows supports a high number of hardware devices, but it’s important to download the latest drivers before you begin. Windows 7 is mostly compatible with Vista drivers, but ensure you obtain the correct versions especially if you’re moving to the 64-bit edition.

Once you take the plunge, a full Windows 7 installation takes around 30 minutes on a modern PC. That’s not as fast as some Linux distributions — especially considering so little software is included — but it’s not too long to wait. Windows will help you install drivers to some extent, but I still needed to manually install software for several unrecognized devices.

If you liked Vista’s Aero interface, you’re going to love Windows 7. Of course, the inverse is also true.

Personally, I switch off most of the irritating effects: watching a window swish into view for the nine-hundredth time becomes tiresome. That said, I miss the Aero look when returning to Windows XP.

The most significant change is the taskbar. It’s now double-height and only shows an application’s icon by default. 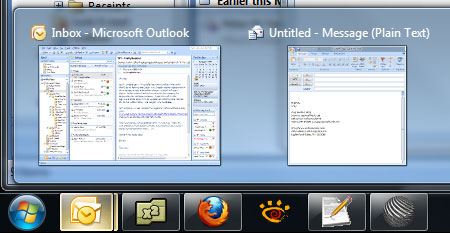 Icons can be re-arranged or permanently pinned to the taskbar. That’s a welcome addition we’ve been waiting for since Windows 95!

Application windows are grouped together. Hovering over the icon shows a thumbnail of all open windows which you can click to activate. You can also hover over a thumbnail to ‘peek’ at the window (all other windows temporarily become transparent). Finally, you can hover over or click the block at the right-hand edge of the taskbar to view the desktop or minimize all windows respectively.

Like many developers, I regularly use applications which open many windows, e.g. Firefox, source, console, etc. Personally, I found it a slow process to hover over a taskbar icon, wait for the thumbnails, then switch to the right window. To change it, right-click the taskbar, choose Properties, then change the Taskbar buttons setting to Combine when taskbar is full.

There have been several minor improvements to window management. You’ll find new features regularly, but here are some of the better ones:

The Start menu is almost identical to Vista. It shows a list of recently-used applications, a search box, links to all programs, recent documents, the control panel, etc. It works well, but I’ve found I don’t use it anywhere near as often as I did in Vista.

Vista sidebar gadgets are also available in Windows 7 but they can now be placed anywhere on the desktop. The Kinesys’ Launch Control gadget has certainly made my life easier and you’ll find your own essential tools. Unfortunately, gadgets can be fragile and the gadget system becomes unstable if a single one fails. That often occurs when a gadget can’t ping it’s home address.

Finally, Microsoft really need to improve the consistency of the interfaces. Some applications have Office 2007-style ribbons. Some have XP/Vista-style task panes. Many have tabbed dialogs that have not changed for 15 years. It’s not a problem for anyone who’s watched Windows evolve, but new users could become disorientated.

In the next post, we discuss Windows 7 productivity, software and security.