This is a 3-part review of the first month with Microsoft Windows 7. In part one, we discussed installation and the interface. Today, we look at productivity, software and security.

One of the best new productivity features is jumplists. Right-clicking a taskbar icon or hovering over an icon in the Start menu shows a list of documents that have been recently opened by that application. Regularly-used files can be pinned to the jumplist for easy access.

Libraries is another great feature that few people will notice but it can save time. In essence, a library is a list of associated folders. For example, you might store photos in “D:My Pictures” and “E:My Camera”. You can add both locations to a “Photos” library and treat it as though it was a single unified folder for searching, saving, etc.

Networking has been improved and Windows 7 introduces a “HomeGroup” which simplifies file and printer sharing across multiple devices. The options are still a little daunting for novice users, but it’s a step in the right direction.

We can’t examine productivity without discussing the dreaded User Account Control (UAC). This was perhaps the most irritating “feature” ever introduced and Vista continually nagged for permission to do anything (until you disabled the damn thing). The UAC is still in Windows 7, but it’s less intrusive and significantly easier to configure. Perhaps the Windows 7 UAC isn’t an improvement because it should never have effected productivity in the first place. But for many Vista users, it’s a dream come true.

Finally, we have XP Mode. For me, this was one of the most compelling reasons to upgrade because it allows you to run real versions of IE6 and IE7 (or any XP program) as if it were a native Windows 7 application. Professional, Enterprise and Ultimate users are provided with a fully-licensed copy of XP SP3 which is easy to set up (see Run IE6, IE7, and IE8 on the Same Machine Using Windows 7 XP Mode). However, it’s also possible to obtain many of the benefits of XP Mode on Windows 7 Home. 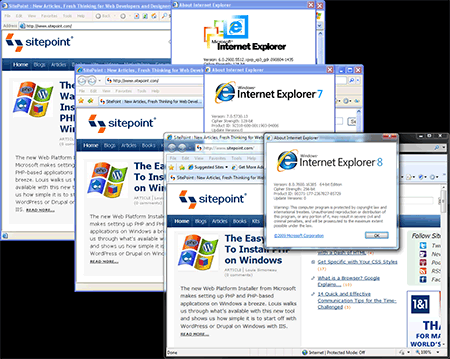 Windows 7 provides surprisingly little software. That’s good — I really don’t need Photo Gallery, MSN Messenger or all the other dross that cluttered my system. Some have complained, but I think it’s good Microsoft have returned to basics. I’m sure anti-trust regulators do too.

Should you need it, all the software is available to download from http://download.live.com/. Links are provided throughout the system and in the Windows update.

For developers, Internet Information Server (IIS) is still available as a component on all versions of Windows 7. Microsoft has also released the Web Platform Installer which installs and configures a variety of development systems such as PHP, SQL Server Express, Visual Web Developer, and popular applications such as WordPress, Joomla, and Drupal. That’s a good move. Microsoft appear to be embracing open source using Windows as the development platform.

Internet Explorer 8.0 remains omnipresent in Windows 7, although European users should eventually see the browser ballot screen if they retain IE as their default browser. Ballot screen issues are still being agreed, but most developers will switch browsers within 10 seconds of Windows booting for the first time.

Few people realize the incredible lengths Microsoft go to with software compatibility. I’m yet to find an application written for a previous version of Windows that does not work … although I’m probably more cautious than some.

My only gripe is the lack of native 64-bit software. Most 32-bit applications will work without a hitch, so you’ll be able to install Firefox and Microsoft Office. However, issues can occur when 32-bit software needs to access a device with a 64-bit driver. For example, Skype’s webcam functionality fails and few media player codecs are available in 64-bit versions. The ludicrous situation is highlighted by Java: you need both the 32-bit and 64-bit runtimes installed depending on which applications you want to run. It’s a mess that will confuse users and it really should have been solved well before 2009.

Microsoft claim Windows 7 is the most secure version to date. I’m not doubting it. However, British security company Prevx recently suggested Windows 7 users were experiencing a “black screen of death” owing to a Microsoft update. This claim has been retracted since malware was discovered to be the culprit.

It’s evident that Windows 7 can still be infected. However, in my opinion, the anti-virus industry makes a lot of noise about Windows security because they have the most to gain. Horror stories and paranoia feed their profits.

A computer system is only as secure as the person who’s using it. Novices who open every email attachment and click “yes” to every software installation will undoubtedly stumble across malware and viruses. That won’t happen if you’re careful: I’ve run every version of Windows from v2.0 without a memory-resident anti-virus solution and have yet to be infected.

Until recently, I used lightweight solutions such as ClamWin to check the integrity downloaded files. However, I’ve now opted for Microsoft Security Essentials — independent tests show it offers better security than many, it’s fast enough, and doesn’t hog your hard disk or memory. SE isn’t provided with Windows 7, but it’s worth considering if you usually purchase anti-virus software.

In my next post, we discuss performance and the future for Microsoft and Windows.