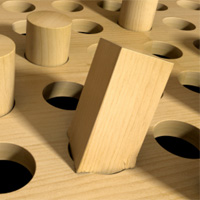 And I don’t mean developers, I mean real people — actual users, who are browsing the Web with assistive devices and making use of ARIA enabled applications?

See, when I first researched the question of accessible Ajax for The JavaScript Anthology, back in 2006, there was no such thing as ARIA; there was only the early draft ideas that would eventually become it, based largely on work done at IBM.

And I was unimpressed. Not because of any specific details, but over the entire concept behind it — the idea that all RIAs needed to make them usable for screenreaders is more information seemed naïve.

And now that we have a formal specification, with browsers and screenreaders that have working implementations, I ask the same question — are RIAs really appropriate to assistive devices if only they had that role and state information, or are we trying to force a square peg into a round hole? Are we just adding layers of information on top of a paradigm that is fundamentally incompatible with the target devices?

What my question really comes down to is, can any Ajax-based application which requires an API to give the consuming device enough information to make sense of it, possibly be better than what we had before — where you submit a form and you get a new page in response — something that generations of devices were well able to comprehend.

I’m not trying to dredge up my stop using Ajax argument again — not at all, I accept that Ajax is here to stay, and welcome it as a valuable addition to the programmer’s toolkit. But the hype has yet to calm down, and Ajax is still over-used. The question of to what extent Ajax applications are expected to progressively enhance from static applications is still very much an issue, as the bulk of the comments in one of Craig’s recent posts highlighted all too sharply.

So where are the ARIA users? And what do they think?

It’s an honest question, because I really don’t know. Is there any information? Have any studies been carried out, that convincingly answer the question of whether ARIA enabled applications are a better user experience for people using assistive technologies, compared with conventional post-and-response style applications, that RIAs should otherwise be expected to degrade to?

Is ARIA really the way forward, or is it just a solution looking for a problem?