So, let’s get this out of the way: HTML email is not cool or groovy.

Hang in the lobbies at SXSW or Web Directions and the buzzy chatter will be all about HTML5 or iPhone development or CSS3. Mention putting HTML into email and you’re likely to be met with anything from disinterest to distaste to open hostility.

Designers will tell you it’s finicky and primitive. Fair call. Techies often bemoan it as unnatural and unnecessary, though that’s a bit of a late nineties outlook in my view.

However, I believe the most common misunderstanding with HTML email is what people believe it’s for.

Quiz most web people and they’ll tell you HTML email is used for:

Take a closer look at your inbox, though, and you’ll probably be surprised. Rather than sales and marketing shtick, most of the HTML you’ll find is actually being used to support basic business processes.

Let’s take a look at what you might find in a typical inbox in 2010. Exactly who IS sending all this HTML email?

In the Facebook universe, the “Friend Request” is the basic building block. In theory, nothing really worthwhile happens until you start creating mutally agreed connections.

And how are most of these friend requests made? I suspect you already know it’s via the magic of HTML email, of course. 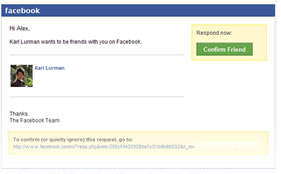 Think about that: the glue that holds together the world’s most ubiquitious social networking Godzilla is HTML email.

Whether you’re a Facebook fan or not, it certainly tells you something about Facebook’s thinking. Despite HTML email’s potential delivery and formatting headaches, they still believe plain text won’t cut it for this mission-critical task.

Every time a person starts “following” you, a neatly formatted, blue-rimmed email arrives in your inbox with the new follower’s avatar and count details. It’s easy to forget that this has only been the case for the past 18 months. 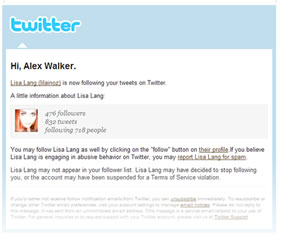 If you remember the original plain-text version, this is a huge improvement; now you can assess a new follower without leaving your email program.

In the Twitterverse, HTML email is the only way you’re ever told about new followers, so we can only guess that Twitter must send these emails by the millions daily.

Flickr is a visual experience so it’s no surprise its email has a visual bent too. 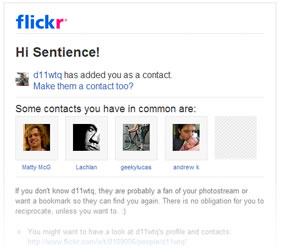 It currently uses HTML email in two areas — to inform you of new contacts and when you’ve been tagged in another user’s photo. Like the site, Flickr keeps its mail simple, spacious, and elegant.

Yes, the Web’s video behemoth also does a tasty line in HTML mail. Currently, if you subscribe to any YouTube user feed or channel, you’ll receive a weekly HTML email summarizing your feed. 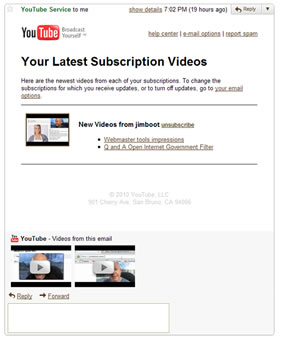 The clever part is that in many mail applications (certainly Gmail), you can play the videos live within the email.

Now we’ve really reached old school. eBay was a pioneer in this area, trusting a huge chunk of their sales process to HTML mail since the early 2000s.

This was a gutsy decision at the time since, by its nature, HTML email is always more likely to be blocked or filtered than plain text. And when people’s hard-earned is involved, things can turn ugly quickly. 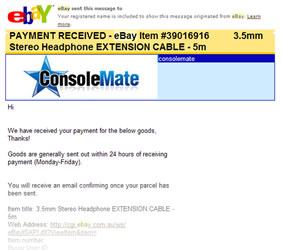 Nevertheless, eBay must have long ago concluded that the branding confidence and presentation benefits of HTML were still worth the risk.

So there you have it. Five of the biggest, hippest brands on the Web rely on HTML mail.

In each case, the email style is kept simple, but it’s in no way an afterthought. Rather, HTML email gives these sites the ability to proactively reach out to their users via their mail client.

In the era of tweets, walls and status updates, it’s easy to overlook how powerful that is.

Mat Patterson from Campaign Monitor was recently a guest on the SitePoint Podcast and I recommend you listen to his take on HTML email. There are simply very few people more knowledgable on this subject. Don’t miss the opportunity to tap his brain. 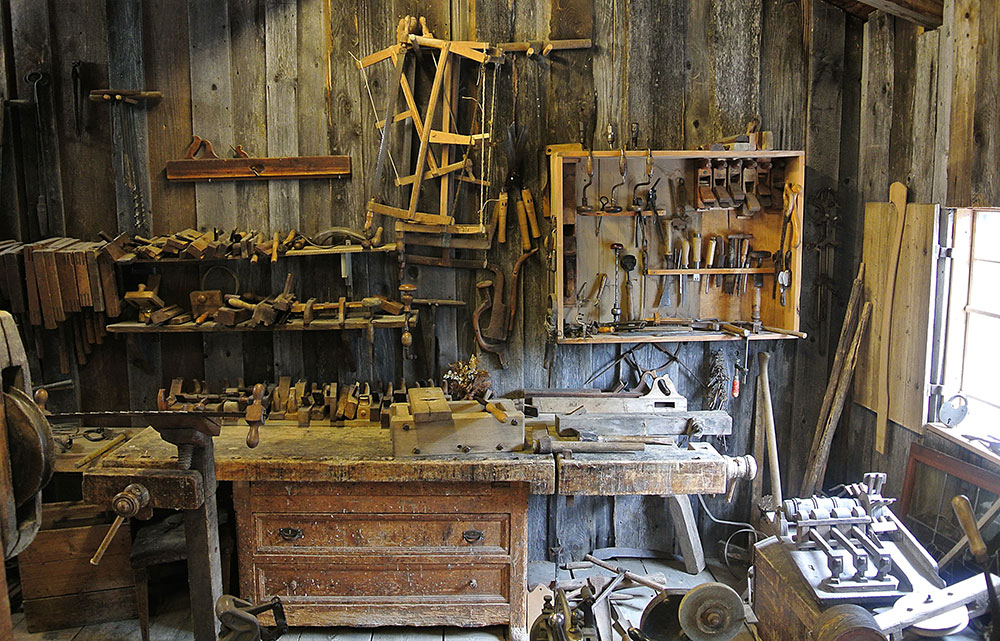