Amongst typographers and type-lovers it is often considered to be a type faux pas to use the wrong type of quotes. Did you know there is a wrong type of quote, a quote from the wrong side of the tracks? Well there are such things known as smart quotes and dumb quotes. Smart quotes (sometimes known as book quotes) are the curly or curved style of quote. The have an opening and closing style. Dumb or straight quotes are straight up and down, sometimes tapered vertical marks.

So what’s the big deal? It really depends on how pedantic you want to be with your web or print typography. Many readers may not notice which type of quotes you’re using but if you love your type and like to do things the right way, you can be specific about the quote marks you’re using. If you’re using Microsoft Word or a similar text editor, you’ll find that the software actually fixes the quote marks for you as you go. Desktop publishing software such as InDesign sets smart quotes as default. Dumb quotes are only used between measurements, for example 5’ 11”.

The illustration below shows a number of different typefaces with smart and dumb quotes. 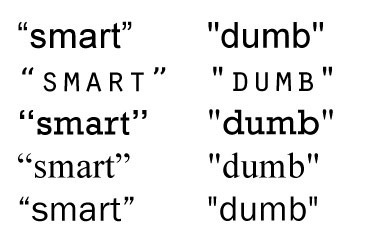 When it comes to web typography you can add smart quotes manually using Hex codes as follows:

There are other tools that can help you to add or remove smart quotes to your web site. SmartyPants is a free plug-in for Movable Type, Blosxom, and BBEdit that translates plain ASCII punctuation characters into “smart” typographic punctuation HTML entities. WordPress sets smart quotes as default, but there is a plug-in called Unfancy Quotes which lets you turn them off (curly quotes can interfere with code).

Do you pay attention to smart and dumb quotes? Does it bother you when you see them used incorrectly?

Taking the Double Trouble Out of Pull QuotesAlex Walker