Firefox 28 already? It’s been a full six weeks since Firefox 27 and Mozilla is back with a freshly-baked version. You can get it in one of three ways: Waiting for an auto-update; choosing About Firefox from the menu; or downloading the installer from Firefox.com.

Again, there are few obvious features for end users but we developers are more fortunate…

I find myself using the built-in Developer Tools more often than Firebug. While Firebug still has the edge in most areas, it can’t beat the Mozilla tools for speed and quick inspections.

Firefox 28 introduces a split console mode that allows you to use the DOM inspector, debugger, profiler etc., without having to switch back and forth to the console pane. You can see this by clicking the toggle split console icon in the top-right of the tool window. 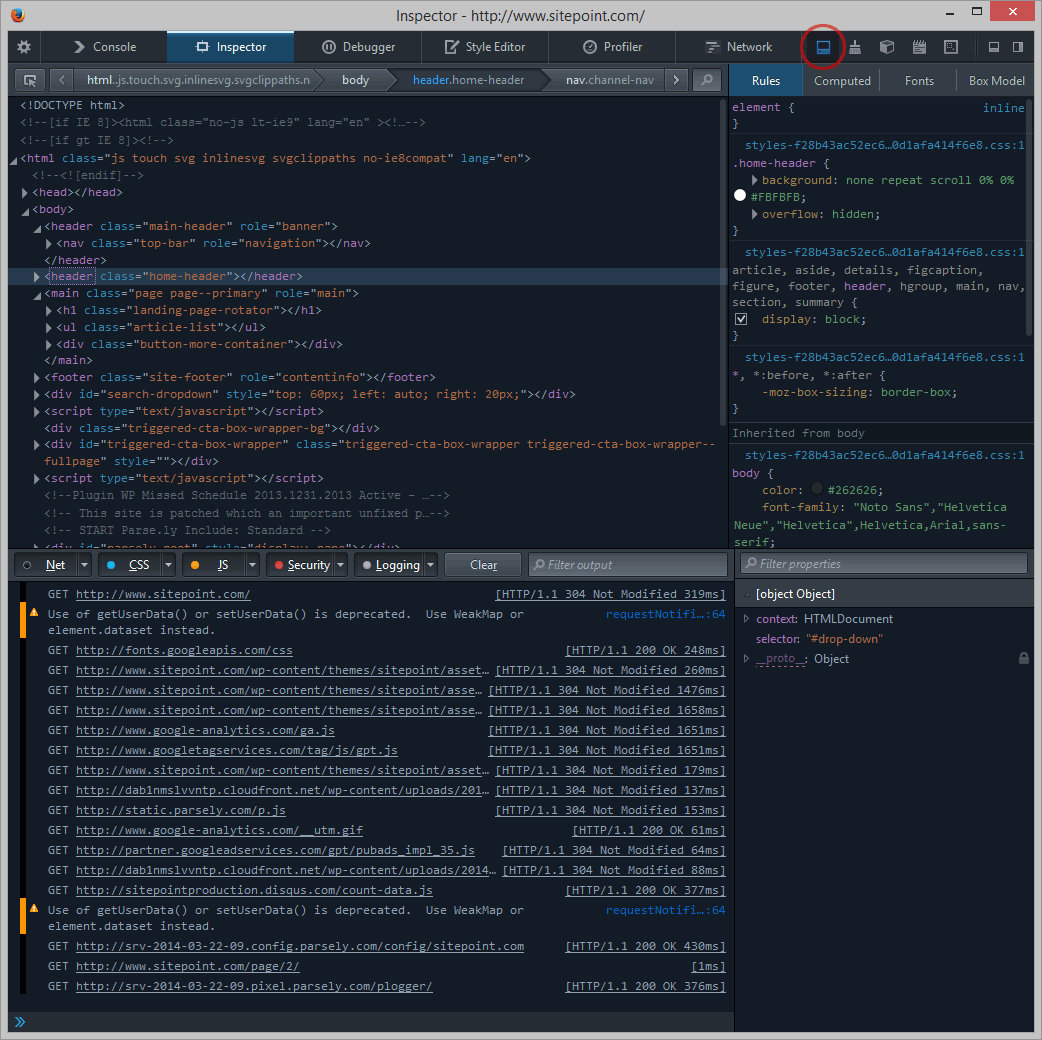 HTML5 games are becoming increasingly sophisticated, but keyboard, mouse, and touch are not always the best control mechanisms. The new Gamepad API defines a cross-browser interface for traditional game console controllers offering a collection of buttons and axes.

The Gamepad API appeared in Firefox 24 but had to be enabled by setting dom.gamepad.enabled to true in the about:config preferences. The API is enabled by default in Firefox 28 and is also implemented in Chrome with a slightly different set of features and a -webkit prefix.

It’s possibly a little early to use, but see Using the Gamepad API on MDN for more information.

A few updates have been made to Firefox’s video handling:

A few minor updates snuck in under the radar:

Finally, Mozilla has decided to abandon a Metro version of Firefox on Windows 8 and RT (I realize it’s not named Metro any longer, but I’m yet to meet anyone who doesn’t use that name!)

The Metro version of Firefox has been in development for more than a year and had a greater emphasis on full-screen simplicity and touch controls. In a recent press release, the team’s leader, Jonathan Nightingale stated:

“In the months since, as the team built and tested and refined the product, we’ve been watching Metro’s adoption. From what we can see, it’s pretty flat. On any given day we have, for instance, millions of people testing pre-release versions of Firefox desktop, but we’ve never seen more than 1,000 active daily users in the Metro environment.

“This opens up the risk that Metro might take off tomorrow and we’d have to scramble to catch back up, but that’s a better risk for us to take than the real costs of investment in a platform our users have shown little sign of adopting.”

I’m not surprised. Firefox attracts power-users and developers who are more likely to use the standard Windows desktop than a full-screen app. It means Firefox will not be available to Windows RT users but the tablets are yet to make a significant dent on the market. RT users are left with a choice of Chrome 32+, which offers an unusual — if not bizarre — RT experience, and IE11 — a browser specifically designed for the Metro interface.

Firefox may not receive the attention it once did, but Firefox 28 remains one of the best browsers money can’t buy (unless you paid Dell to install it!)