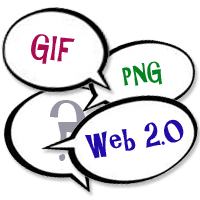 Since it’s the end of the week, I thought I’d look at some of the more bizarre stories that have been circulating the web during the past few days. Both involve English and I really pity anyone attempting to learn the language!

According to Global Language Monitor (GLM), at 10:21 GMT on 10 June 2009 the English language consisted of precisely 999,999 different words. The millionth word appeared 1 minute later and earned its place in the dictionary. That word was: “Web 2.0”.

Despite “Web 2.0” being an existing word with a digit on the end, GLM received a significant amount of publicity for their announcement. They are a commercial company who scour the Internet for new terms. A word must be used at least 25,000 times across national boundaries and outside specialisms for it to pass GLM’s rigorous validation procedures.

My analysis may not be as thorough, but a simple search on Google reports over 45 million references. Yahoo reports 173 million references. Bing does even better with 2.2 billion references (so much for it being a “decision” engine!). It’s strange that Web 2.0 had not been considered before; the term has been around almost 10 years and has certainly been popular since 2004.

Lexicographers were quick to point out that the exact size of the English vocabulary is impossible to quantify. The Oxford English Dictionary also estimates that the number of words is nearer two-thirds of a million.

Whether it’s hype or a ridiculous publicity campaign, I’m looking forward to “Web 2.0” appearing in the dictionary. Perhaps we’ll finally have a description of what it really means!

The Correct Pronunciation of “GIF”

Graphics Interchange Format, or GIF, was introduced by CompuServe in 1987. Show someone the word “GIF” and ask them to read it aloud. Most English speakers will pronounce it with a hard “g” as in “gift”. Unfortunately, they are wrong — it’s pronounced “jiff”, with a soft “g”, and the evidence is presented at the GIF Pronunciation Page.

Personally, I don’t think it matters what the original programmers intended; almost everyone pronounces GIF the way it is written. There are pedants who insist on using “jiff” but no one understands them! Do you prefer GIF or JIFF? I’m firmly in the GIF camp and my campaign to correct its pronunciation starts here!

(Incidentally, the PNG specification also insists on “ping” rather than “pee en gee”, but it’s an open standard so we can change that!)

How Do You Represent a Language on the Web?Gabrielle Gosha