In this tutorial we’ll be looking into Api.ai, an API that lets us build apps which understand natural language, much like Siri. It can accept either text or speech as input, which it then parses and returns a JSON string that can be interpreted by the code that we write.

All the files we’ll use in this tutorial are available in this Github repository. 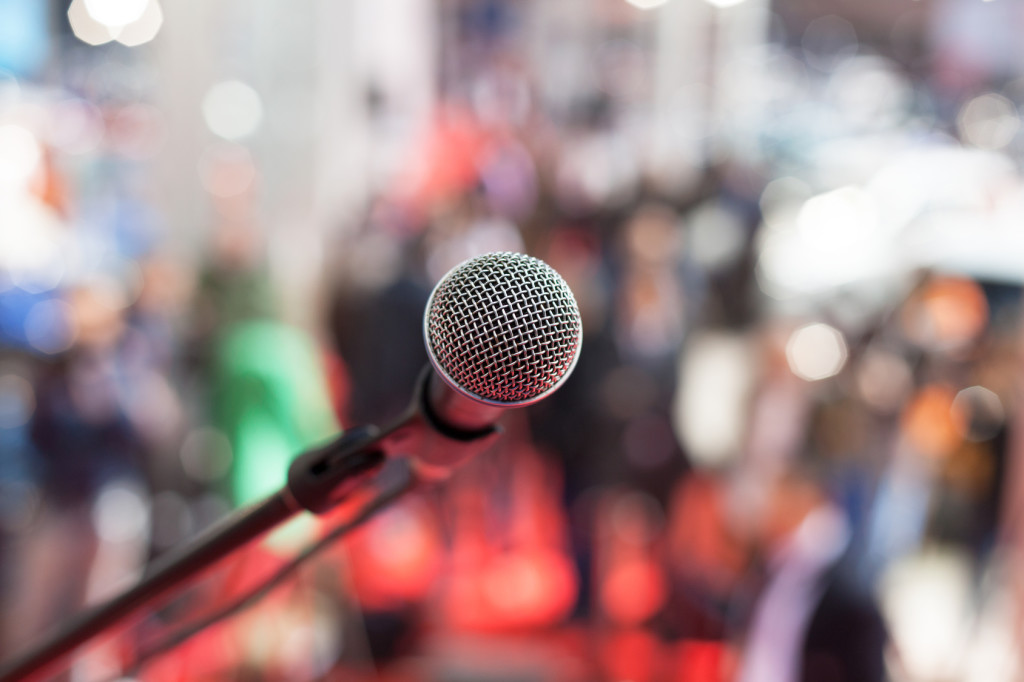 Before we move on to the practical part, it’s important that we first understand the following concepts:

To use domains for your agent, select your agent from the console and then click on the domains menu at the top. From there, enable the domains knowledge base and fulfillment. Note that domains are currently in beta, but you can always use the API console to test them. 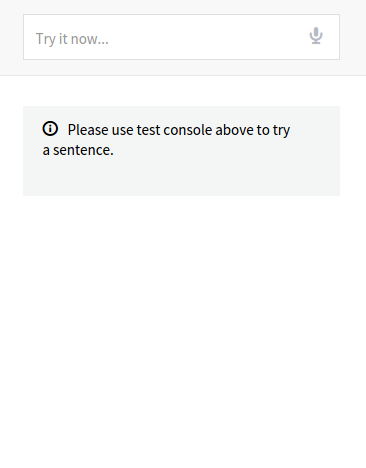 Enabling the domains knowledge base enables the domains functionality. Enabling the fulfillment enables the use of third-party services such as Small Talk and Weather. This means that we won’t need to make a separate request to a specific API if the service that we need already integrates with Api.ai.

Getting the Current Time in a Specific Place

Now that we have an understanding of the main concepts, we can proceed with building a simple app. The first thing that we’re going to build is an app for getting the current time in a specific place.

Next, go to the agents page and create a new agent by clicking on the ‘Create Agent’ button. Once in the page for creating a new agent, enter the name, description, and language, and save.

The agent that we’ve created will be using domains. This means that we do not need to set up entities and intents. What we need is a little help from two Google APIs: Geocoding API and Timezone API. Geocoding API is used to convert the location that we get from Api.ai into coordinates. We then use these coordinates to query the Timezone API to get the current time for that location. Go to your Google Console and enable the Timezone API. The Geocoding API doesn’t require an API key to be supplied, so we don’t need to enable it.

Next, install Guzzle. We will be using Guzzle 5 to make a request to Api.ai.

Then, create a new PHP file (time.php) and add the following code so we can use Guzzle from our file.

After that, define your API keys:

Naturally, in a real app, you’d probably keep credentials outside of app logic, in some kind of local configuration file.

We can now make a request to Api.ai. To make a request, we need to pass in the developer access token and subscription key as headers. We then pass in the body of the request as JSON. The request body should contain the query and the lang keys. The query is submitted from the client-side through a POST request. An example of a query for this app would be “What time is it in Barcelona, Spain?” or “What’s the current time in Ikebukuro, Japan?”. The response returned is a JSON string so we convert it to an array by calling the json method on the $response.

Here’s a sample response that we get when we make the request above:

If we get a status code of 200, it means the request was successful. The data that we need are stored in the result item. In this case, we only need to extract the location from the parameters. If a location isn’t returned, then we just tell the user that the location isn’t found.

If a location is found, we make a request to the Google Geocoding API to convert the location to coordinates. If the status is OK, this means that we got a result. So we just extract the latitude and longitude values from the first result.

Next, we get the current unix timestamp. We pass this value along with the latitude and longitude as a query for our request to the Google Timezone API. We then extract the timeZoneId which we can use to temporarily set the timezone using the date_default_timezone_set method. Finally, we just output the formatted time to the user.

Let’s proceed to the client side. Create an index.html file with the following code:

We’re using jQuery (for event handling) and responsive-voice.js. The responsive-voice library allows us to convert text to speech. We use it to speak out the results that we get from the server.

We also have speech-recognition.js, which we use for converting speech to text. This uses the Web Speech API. Sadly, at the time of writing it’s still only partially supported on a few browsers, so this tutorial will assume you’re using Chrome (which does support it).

Let’s explain the above file. First is the global variable that we will use to store the current speech recognition object.

Aside from that, we also have the switchRecognition method which is called every time the user clicks on the button for triggering the speech recognition to start or stop.

When the user presses the enter key on the query field, this also triggers the query to be sent to the server.

Most of the code in the speech-recognition.js file is from this gist which shows an example of how to use Api.ai on the client-side.

Next is the main.js file where we submit our query to the server. Once we get a response, we use responsive-voice to speak it out and also output it in the response container. That way, we can check the response visually.

The next app that we’re going to build allows the users to convert a specific amount from one currency to another.

First, create a new agent and call it CurrencyConverter. 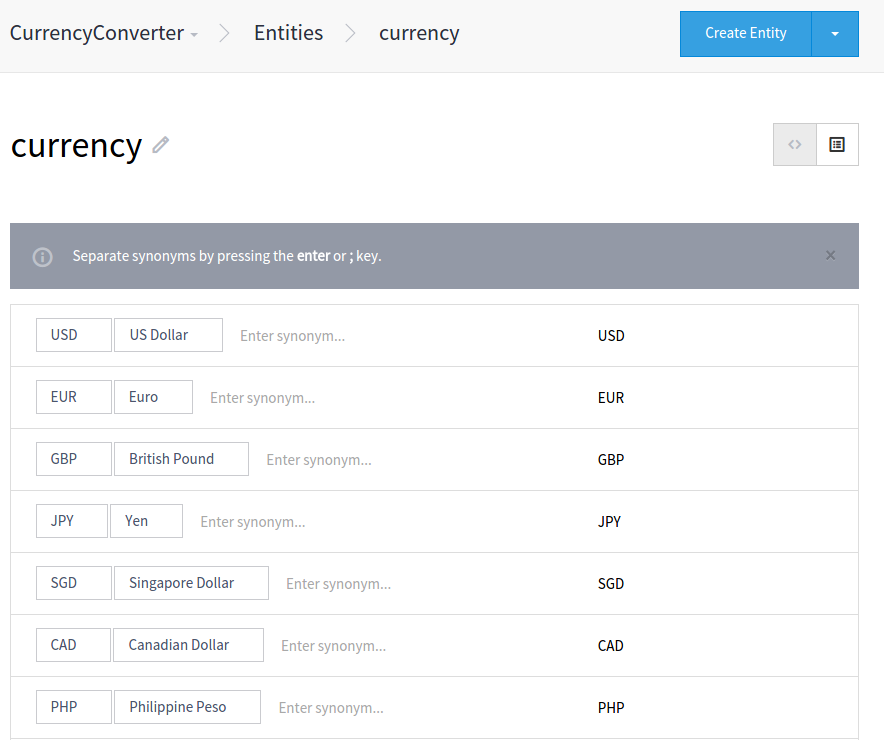 Next create a new intent and call it convertMoney. 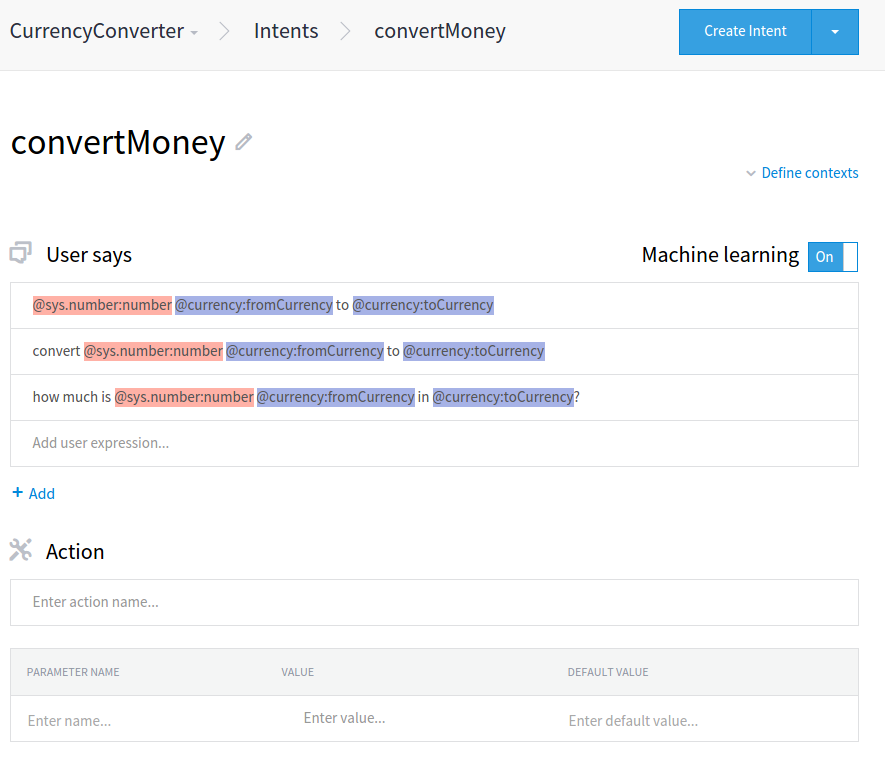 From the screenshot above you can see that we’ve added the following under the ‘user says’ section:

The ‘user says’ section is where we define examples of what the user can say to trigger this specific intent. What we’re doing here is using entities as substitutes for actual values that the user might use. @sys.number can refer to any number. @currency can refer to any currency that we added earlier when we created the currency entity. Using the colon after the entity allows us to assign an alias to it. This alias can then be used to get the value used by the user in the code.

The ‘action’ section is where we define the action or method that we want to execute if this specific intent is used. In this case we won’t define anything because we’re only creating an app which only does one thing.

The ‘fulfillment’ section is where we define a template to the speech that we want to output once the intent is used. For example, we can put the following:

This will then be available on the speech item in the result that we get. From there, we can perform string replacement to replace those variables with the actual values that we get. But let’s just leave it as blank for this app.

Once you’re done, click on the ‘save’ button to save the intent.

Now we’re ready to proceed with the code. Create an exchange-rate.php file in your working directory then, add the following code:

As you can see from the code above, it’s basically the same as we did earlier in our previous app. Only this time we’ve added the $currencylayer_apikey variable. This stores the API key that we got from currencylayer.com, an API which allows us to get the current exchange rate from one currency to another. If you wish to follow along, go ahead and sign up for an API key.

Next, we check if there are any results and extract the data that we need. In this case, we need to get the currency that the user wishes to convert, the currency to convert it to and then the amount.

We then make a request to the API and extract the exchange rate from the results:

The results that we get from the API look like this:

Now that we have the current exchange rate, all we have to do now is multiply the rate with the amount that the user provided and then output the result.

In the client-side, we still use the same HTML and files that we used earlier on our first app. You can go ahead and put those same files in your working directory if you’re following along.

The only difference is the URL to which we are sending the request. Point it to where your exchange-rate.php is being served:

In this tutorial, we have learned how to use Api.ai for creating voice-enabled PHP apps. Browser support is still pretty limited because the Web Speech API still isn’t widely implemented. But Api.ai supports other platforms aside from the Web. Android, Cordova, .Net, iOS are a few examples. This means that we can use Api.ai without worrying about support on these platforms. Be sure to check out their docs if you want to learn more. The files that we’ve used in this tutorial are available in this Github repository.