Every project is made up of countless little changes. With a little luck, they will finally form a website, an app, or some other product. Your version control system keeps track of these changes. But only once you understand how to read them will you be able to track your project’s progress.

Using the example of Git, the popular version control system, this article will help you understand these changes.

In version control, the differences between one version and another are presented in what’s called a “diff” (or a “patch”). You’ll encounter diffs when working in technical surroundings like the command line, but also in graphical tools like “Tortoise Git” (Win) or “Tower” (Mac) and in code hosting platforms like “GitHub”. Diffs are the most frequently-used methods of visualizing changes.

Let’s learn to read diffs with an example. Our example diff compares two items with each other: item A and item B. In theory, A and B can be any file. In most cases, however, you’ll be wanting to compare the same file, but in two different versions.

To set the scene, a diff output always begins by declaring which files are represented by “A” and “B”.

The first two strings represent the object hashes (or “IDs”) of our two files. In the background, Git not only saves versions of the project but also of each file item as an object. Hashes like the ones seen here are used to identify a file from a specific version.

Inspecting a 10,000 line file with only two modified lines would be a tedious process if the diff showed the entire contents of the file at once. Instead, only the portions that have actually been changed are shown. In Git, such a portion is called a “chunk” (or a “hunk”). The actual changed lines are surrounded by unchanged lines before and after the modification. These are called the “context”, because they help the user understand the context in which these modifications were made.

A header prepends each of these chunks. The first part of the header informs you which lines were affected, enclosed in two “@” signs each. Let’s see which lines were modified in the first chunk of our example diff:

After the closing pair of “@@”, another piece of context is given: Git tries to display a method name or other contextual information about where this chunk was taken from in the file. However, this differs depending on the programming language and doesn’t work in all scenarios.

To understand a change, you must be able to see both of its states – before and after the modification. This is why Git marks the lines that were actually changed with either a “+” or a “-” sign: a line that is prepended with a “-” sign comes from A, while a line with a “+” sign comes from B.

Our example helps us understand this:

Change #1 contains two lines prepended with a “+”. Because no counterpart in A existed for these lines (no lines with “-“), this means that the lines were added.

Change #2 is exactly the opposite: we have two lines marked with “-” signs in A. Since B doesn’t have an equivalent (no “+” lines), this means they were deleted.

Finally, some lines were actually modified: in Change #3, the two “-” lines were changed to look like the two “+” lines below.

You now know how to read and understand a diff output. Now let’s look at how to generate some of this output in Git.

Before committing changes, you’ll want to see what exactly you did. The “git diff” command will show you all of your local changes that haven’t been added to Git’s ‘Staging Area’, yet: $ git diff

If instead you’d like to see only the changes that you’ve already staged, you can do so by adding the “–staged” parameter to the command.

Changes that have already been committed to the repository can be inspected with the “git log” command. By default, it only spits out an overview of the commit’s metadata (like author, message, and date). If you add the “-p” flag, you can also request detailed information about the exact changes: 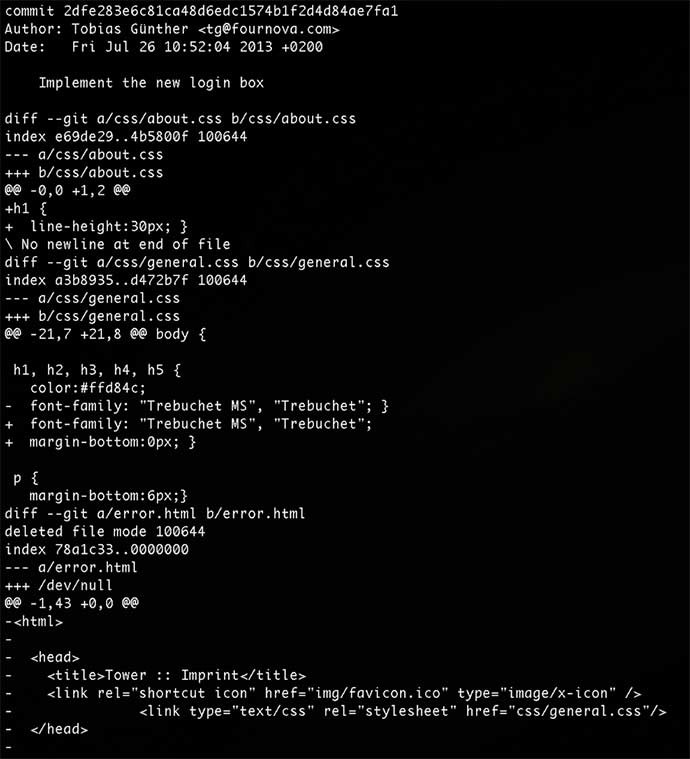 Diffs are also useful when you want to understand how a certain branch (or even a specific commit) differs from another. For example, you might be interested in seeing all the changes from the “contact-form” branch that you don’t have in “master”, yet. To achieve this, use the “git diff” command as follows: $ git diff master..contact-form

But you’re not limited to comparing branches. You can even compare two arbitrary commits with each other: $ git diff 0023cdd..fcd6199

When looking at larger and more complicated modifications, you may need all the help you can get. A dedicated diff tool application will offer an improved visualization – and will thereby make understanding changes easier.

To help you choose from the many available tools in this area, have a look at this overview of recommended apps.

I hope this article showed you that diffs (although they may suggest otherwise on first examination) are not just obscure ASCII art. Once you’ve learned how to read them, they allow you to understand how your project evolved. This makes them an essential tool for every member of a development team.

On Our Radar This Week: Videos and Version ControlJames Hibbard

The Drupal 8 version of EntityFieldQueryDaniel Sipos