If we here at SitePoint had no scruples, we could apparently turn on a not-so-insignificant revenue stream via our Twitter account. Fortunately for you, we’d rather have friends on Twitter than enemies. But if we were that evil, newly launched Twitter ad network Magpie tells us that our 12,000+ Twitter followers are worth over US$3,500 per month if we’re willing to spam them with ads.

We’re not, but we wonder how many people will be. Magpie is a third party ad network for Twitter that allows people to sell tweets on their account on a bid per placement basis. The site says it will contextually match ads based on the type of things you’re tweeting about, so you’ll never serve up advertisements about things that don’t match your usual chatter. By default, Magpie plans to send one ad every 5 tweets, but that can be adjusted by the user down to one every 20 tweets, or once every other tweet.

Magpie sells advertisers on a CPM basis, where CPM represents the cost per 1,000 followers who get sent the ad message. They seem to think that they’ll be able to get CPMs of US$5-15, which is why they’re claiming that SitePoint could bring in forty-two grand per year on our 12,000 followers (and presumably more if we upped out tweet count). 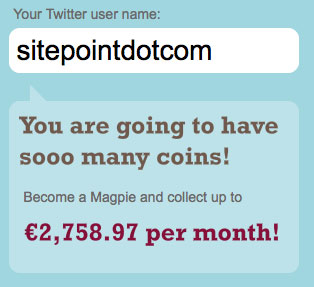 We’ve seen first hand over the past couple of weeks the amount of traffic that a top 100 Twitter account can send — it’s not a trivial amount. But we also know that Twitter isn’t just a promotional vehicle, which is why we’ve made it a point to interact with our followers and provide content other than simply links to our own blog posts and articles. Twitter is about the conversation above anything else, and the problem with Magpie is that it ads noise.

Mike Arrington compares Magpie to PayPerPost. But that’s not really a fair comparison, in our view. PayPerPost has some potential ethical issues, but because blogs are generally fairly low volume, it doesn’t add a very significant amount of noise. That’s why were were comfortable adding it to our list of ways to make extra income on the web a couple of weeks ago.

Magpie, on the other hand, deals with Twitter, which is much higher volume then blog publishing. It is not uncommon for a Twitter user to see hundreds or thousands of tweets stream by from the people they follow each day. Imagine if 20% (the Magpie default) of that content was ads. The noise level is just way, way too high.

Magpie also differs from PayPerPost in that it auto inserts ads, so you could find yourself shilling for something you’d rather not be. Unlike Google AdSense or other forms of display advertising, tweets that go out to your followers coming with your name attached and your implicit endorsement.

Our guess is that some people will try Magpie, but they’ll quickly find themselves losing followers and the value of their account diminishing. Either that, or Twitter will amend their TOS and ban the service.

Remember, you can follow us @sitepointdotcom. If you do, we’ll give you a free copy of our book “The Art and Science of CSS.” Check out our Twitaway page for more details. We promise, we won’t be sending you any Magpie ads!