This has to be one of the strangest acquisitions we’ve ever seen. CNET’s Josh Lowensohn is reporting that online dating site SpeedDate.com has acquired Facebook game Oregon Trail. If you think that’s odd, hold on: it gets weirder.

Not only has the web cam dating site acquired a completely unrelated Facebook game, the plan is apparently to replace the Oregon Trail application with a SpeedDate.com application. Users of Oregon Trail received the following notification from the application early Thursday morning: “Next week, Oregon Trail’s name and functionality will be changed to SpeedDate. Data entered into the original app won’t be used anymore. Soon you’ll be able to try SpeedDate, the fastest way to meet new people, so stay tuned! P.S. If you want to opt out of this app, instructions can be found here.”

That means the purchase appears to be about user acquisition. Is there really an overlap between people that play a knock-off of an 80s computer game and those into online dating? That seems unlikely. Further, Oregon Trail only has a handful of users. Facebook reports just 12,013 monthly active users, while Adonomics says that just 1,223 login each day, and developerAnalytics reports even fewer than that. Both measurement services show a steep drop off in users earlier this year, indicating that the app’s popularity was fleeting and is on the decline. 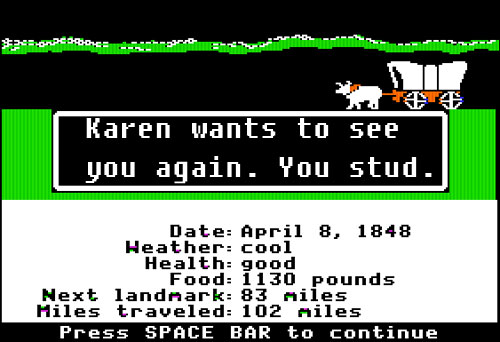 So why purchase a tiny, relatively unused Facebook app, only to cannibalize it and move its users to a completely unrelated application that already does very well on its own? Apparently, this is a user acquisition tactic employed before by the company. In September, TechCrunch reported that the same thing happened with three larger applications, likely also acquired by SpeedDate.com (these were at least semi-related to dating — sort of), but apparently users weren’t warned of that change over. The dA chart does show a spike in SpeedDate’s Facebook daily active usage in September around that time — but it was followed by a steep drop off.

It is hard to imagine that this sort of user acquisition tactic works. Though Lowensohn notes that it is apparently not against Facebook’s terms of service, we can’t believe that users are happy to find that applications they’ve installed have suddenly turned into an unrelated service, and we doubt many of them stick around to try it out.

It also reflects poorly on Facebook, so we’re going to predict that they will update their ToS to make this sort of thing less likely to happen in the future.

SpeedDate.com’s founder Dan Abelon hinted to Lowensohn that some of Oregon Trail’s features might be integrated into the SpeedDate application. Though, we can’t imagine which.