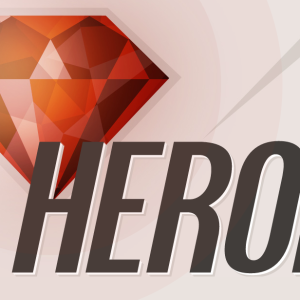 It’s that time of year again when the Ruby community vote for their heroes. The Ruby Hero awards are now entering their 7th year and have become an awesome tradition of recognizing and celebrating the contributions of those Rubyists who give something back. They were started by Gregg Pollack of Envy Labs when he was interviewing people on the Rails Envy Podcast and felt that more recognition was needed in the Ruby community. Voting is now open on the brilliant comic themed website (designed by Nick Walsh at Envy Labs).

The way it works is simple – you go to http://rubyheroes.com/ and vote for your Ruby Hero by providing a link to their Github profile as well as the reason for why you think they are a Ruby Hero. It could be because they have helped you out in some way, made some great blog posts, podcasts or screencasts, created or maintained a piece of awesome software, or just helped to spread the Ruby love.

It’s not a popularity contest – the winners are not those who get the most votes, but are selected from those nominated by the previous years’ winners. The people you vote for don’t have to be well known, in fact many of the previous years’ winners weren’t very well known when they won, but have often gone on to be Ruby rock stars! The winners are presented at Rails Conf every year and receive a lovely looking trophy.

Last year there were 8 winners (there are usually 6, but 3 people won an award on behalf of Rails Girls):

You can see a video of them receiving their awards here.

I got in touch with some of the winners from the previous two years to ask them what being a Ruby Hero meant to them:

I got it for a few things. Technically, I did work on Bundler and Resque. Socially, I got called a “Friday Hug Superhero <3 <3 <3”. I’ve been doing Friday Hugs during my talks around the world which has been super fun. I have some posted [here] (https://twitter.com/hone02/media). Also, my work on Rails Girls. At this point I’ve been to 10+ workshops around the world helping and organizing as well as help get the Rails Girls Guides online and open sourced.

I’m super humbled that people felt I deserved to be recognized for my work. I’m lucky that at Heroku, I get the opportunity to care about the Ruby community as a whole. In addition, I’ve had great friends and mentors along the way like Yehuda (wycats), Aaron (tenderlove), Andre (indirect). I hope I in return can inspire other upcoming rubyists to help make our community a better place.

I got the award for my work on Sidekiq, sidekiq.org. I’ve previously published about a dozen different gems, e.g. connection_pool and dalli, and done lots of blogging about Ruby over the last 5-7 years.

It was nice to see my hard work acknowledged by the community. I’ve always felt that OSS only works if people actively give back some of their time to improve the ecosystem and there will always be people that give way more than necessary because they love building software. Rewarding those outliers with an award like this is easy yet incredibly meaningful.

I got the award for my open source contributions, especially to Rack, Rubinius and most of all Sinatra. For giving support to people on IRC, mailing lists and so on.

It felt strange. It was amazing and awkward at the same time. I mean, I didn’t do these things for recognition, but for the fun of doing it. Getting an award for that is something I would not have considered possible even a few months before RailsConf. On the otherhand, for some reason Sven and Josh talked me into appearing “Travis style”, ie wearing a ShiteShirt and what was my attempt at growing a moustache. When I saw the video, I promised myself never to do that again…

I have been given the Ruby Hero award in 2012 for my work around Ruby/Rails I18n, Travis CI, and other open source projects.

I have always felt that every bit of energy I’ve spent working on open source, especially in the Ruby and Rails community, has come back to me tenfold, up to an amount of positive reward that always made me feel humbled and very grateful.

So, when I was first told that I had been nominated for the Ruby Hero award I almost felt urged to reject it: I already had received so much for my work that I felt others probably would deserve this award way more then me.

Eventually being announced and called on stage to receive the award moved me to tears and I can’t express in words how grateful I am for what this community has given to me.

My Ruby Hero was awarded for Rails Girls as an organisation and I just accepted it as the co-founder. Rails Girls is a grassroots movement to encourage more women get involved in programming, run by the local Ruby communities now in over 160 cities all over the world.

It was obviously a huge honour and felt great to be recognised by the community. However Rails Girls wouldn’t be here be it not for the Ruby community and all the volunteers who put countless hours in organising the events. Wish I could have taken everyone with me to RailsConf last year!

Linda, Henrietta and I received the Ruby Hero award for our work with and behalf of the whole Rails Girls. Rails Girls started small, just with one workshop in Finland, but it grew to a worldwide phenomenon through our amazing local organisers who make the events happen all around the work.

I feel really honored to get this award, specially next to many other Heroes, who have done lot of great to improve Ruby and the scene. I think our award shows that the Ruby community is really supportive as a whole also interested getting new and diverse people in to programming.

I think that what comes across in all of these quotes is just how much it means to the recipients to be valued by the community. They all give up their time and make contributions because they enjoy it, but it means so much more to know that it means something to somebody.

So, if somebody has helped you with Ruby, no matter how big or small, or if you’ve found a particular gem useful, don’t just vote for them – make sure you let that person know how they’ve helped by saying thank you. This is your chance to give something back to the people that have helped you in your Ruby journey.

So what are you waiting for? Get voting for your Ruby Hero