Although this isn’t strictly web development, I figure that many of us are likely to (if you haven’t already) encounter this issue at some time –particularly with Firefox– so it’s worth mentioning here.

This week I found the buzz of setting up my shiny, new, dual LCD PC was tempered by the tedious task of getting the all the software and settings I like set up just right again. Of course, this comes with the territory of setting up an out-of-the-box computer, but often things were much harder than they should rightly have been.

Thunderbird was a great case in point. While it operates beautifully, I was quite surprised at the level of hoop-jumping that was expected to do something as simple as move mail and settings from one install to another. I’m apparently not alone either as Matt (Magain) was saying he had to import his mail into Eudora and then export it to Thunderbird to get a satisfactory result. 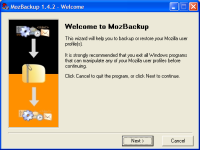 Anyway, rather than bleat about this, the good news is I did find a third party solution that not only reliably transfers Thunderbird’s mail, filter settings, accounts and extensions, but also backs-up your Firefox bookmarks, extensions (not 100% reliably), saved form details, saved passwords, cookies, certificates, downloaded files lists and history.

MozBackup is a client app from Pavel Cvrcek. After an hour of fruitless folder shuffling, I used Mozbackup to transfer over a gig of mail between clients in 4 or 5 clicks. It was simple, effective and best of all, free.

Pavel, I thank you.

Any chance of them building this into Tbird?