This article was originally published on mongoDB. Thank you for supporting the partners who make SitePoint possible.

Storytelling is one of the parts of being a Developer Advocate that I enjoy. Sometimes the stories are about the special moments when the team comes together to keep a system running or build it faster. But there are less than glorious tales to be told about the software deployments I’ve been involved in. And for situations where we needed to deploy several times a day, now we are talking nightmares.

For some time, I worked at a company that believed that deploying to production several times a day was ideal for project velocity. Our team was working to ensure that advertising software across our media platform was always being updated and released. One of the issues was a lack of real automation in the process of applying new code to our application servers.

What both ops and development teams had in common was a desire for improved ease and agility around application and configuration deployments. In this article, I’ll present some of my experiences and cover how MongoDB Atlas and Kubernetes can be leveraged together to simplify the process of deploying and managing applications and their underlying dependencies.

Let’s talk about how a typical software deployment unfolded:

Some of these deployments would fail, requiring a return to the previous version of the application code. This process to “rollback” to a prior version would involve me manually copying the repository to the older version, performing manual database restores, and finally confirming with the team that used this system that all was working properly. It was a real mess and I really wasn’t in a position to change it.

I eventually moved into a position which gave me greater visibility into what other teams of developers, specifically those in the open source space, were doing for software deployments. I noticed that — surprise! — people were no longer interested in doing the same work over and over again.

Developers and their supporting ops teams have been given keys to a whole new world in the last few years by utilizing containers and automation platforms. Rather than doing manual work required to produce the environment that your app will live in, you can deploy applications quickly thanks to tools like Kubernetes.

Kubernetes is an open-source system for automating deployment, scaling, and management of containerized applications. Kubernetes can help reduce the amount of work your team will have to do when deploying your application. Along with MongoDB Atlas, you can build scalable and resilient applications that stand up to high traffic or can easily be scaled down to reduce costs. Kubernetes runs just about anywhere and can use almost any infrastructure. If you’re using a public cloud, a hybrid cloud or even a bare metal solution, you can leverage Kubernetes to quickly deploy and scale your applications.

The Google Kubernetes Engine is built into the Google Cloud Platform and helps you quickly deploy your containerized applications.

For the purposes of this tutorial, I will upload our image to GCP and then deploy to a Kubernetes cluster so I can quickly scale up or down our application as needed. When I create new versions of our app or make incremental changes, I can simply create a new image and deploy again with Kubernetes.

Why Atlas with Kubernetes?

By using these tools together for your MongoDB Application, you can quickly produce and deploy applications without worrying much about infrastructure management. Atlas provides you with a persistent data-store for your application data without the need to manage the actual database software, replication, upgrades, or monitoring. All of these features are delivered out of the box, allowing you to build and then deploy quickly.

In this tutorial, I will build a MongoDB Atlas cluster where our data will live for a simple Node.js application. I will then turn the app and configuration data for Atlas into a container-ready image with Docker.

MongoDB Atlas is available across most regions on GCP so no matter where your application lives, you can keep your data close by (or distributed) across the cloud.

To follow along with this tutorial, users will need some of the following requirements to get started:

First, I will download the repository for the code I will use. In this case, it’s a basic record keeping app using MongoDB, Express, React, and Node (MERN).

Next, I will npm install and get all the required npm packages installed for working with our app:

Selecting Your GCP Region for Atlas

Each GCP region includes a set number of independent zones. Each zone has power, cooling, networking, and control planes that are isolated from other zones. For regions that have at least three zones (3Z), Atlas deploys clusters across three zones. For regions that only have two zones (2Z), Atlas deploys clusters across two zones.

The Atlas Add New Cluster form marks regions that support 3Z clusters as Recommended, as they provide higher availability. If your preferred region only has two zones, consider enabling cross-region replication and placing a replica set member in another region to increase the likelihood that your cluster will be available during partial region outages.

Create Cluster and Add a User

In the provided image below you can see I have selected the Cloud Provider “Google Cloud Platform.” Next, I selected an instance size, in this case an M10. Deployments using M10 instances are ideal for development. If I were to take this application to production immediately, I may want to consider using an M30 deployment. Since this is a demo, an M10 is sufficient for our application. For a full view of all of the cluster sizes, check out the Atlas pricing page. Once I’ve completed these steps, I can click the “Confirm & Deploy” button. Atlas will spin up my deployment automatically in a few minutes. 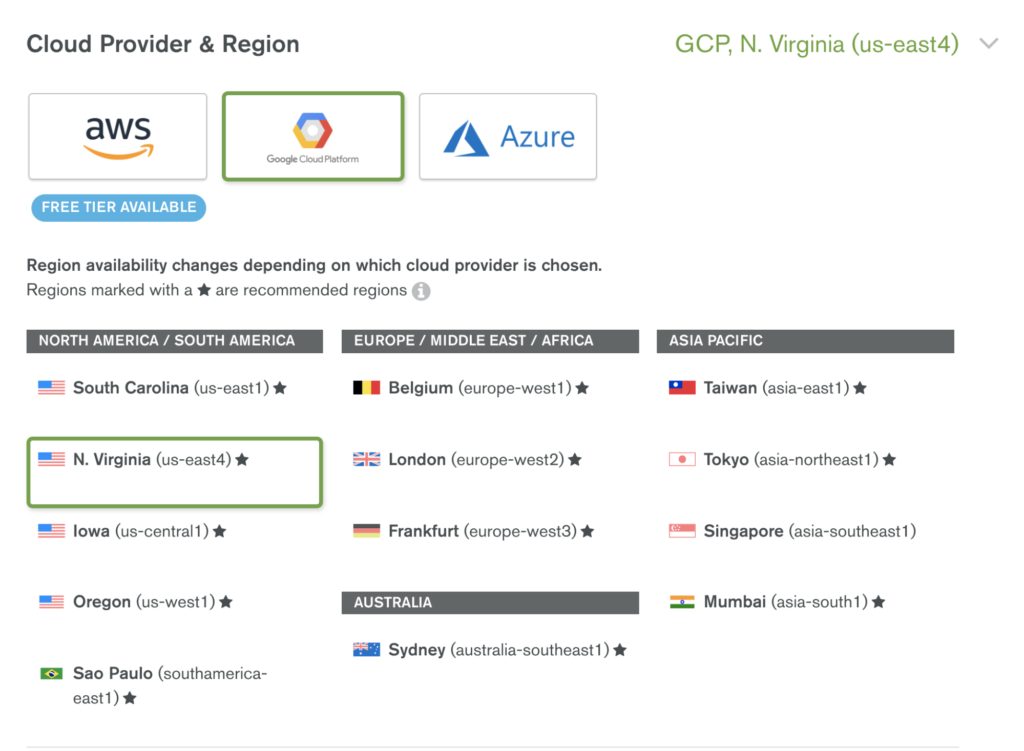 Let’s create a username and password for our database that our Kubernetes deployed application will use to access MongoDB. 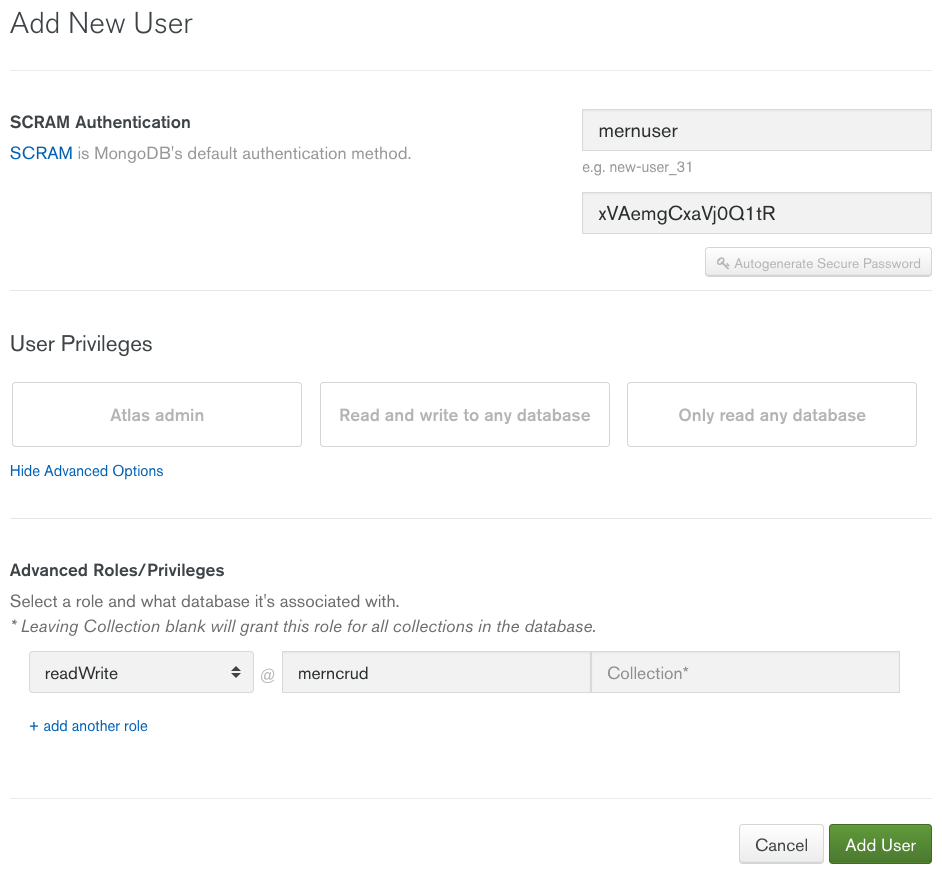 Your database is now created and your user is added. You still need our connection string and to whitelist access via the network.

Get your connection string by clicking “Clusters” and then clicking “CONNECT” next to your cluster details in your Atlas admin panel. After selecting connect, you are provided several options to use to connect to your cluster. Click “connect your application.”

Options for the 3.6 or the 3.4 versions of the MongoDB driver are given. I built mine using the 3.4 driver, so I will just select the connection string for this version. I will typically paste this into an editor and then modify the info to match my application credentials and my database name:

I will now add this to the app’s database configuration file and save it.

Next, I will package this up into an image with Docker and ship it to Google Kubernetes Engine!

Get started by creating an account at Google Cloud, then follow the quickstart to create a Google Kubernetes Project.

Once your project is created, you can find it within the Google Cloud Platform control panel: It’s time to create a container on your local workstation:

Set the PROJECT_ID environment variable in your shell by retrieving the pre-configured project ID on gcloud with the command below:

Next, place a Dockerfile in the root of your repository with the following:

To build the container image of this application and tag it for uploading, run the following command:

Upload the container image to the Container Registry so we can deploy to it:

Next, I will test it locally on my workstation to make sure the app loads:

Great — pointing my browser to http://localhost:3000 brings me to the site. Now it’s time to create a Kubernetes cluster and deploy our application to it.

I will be using the Google Cloud Shell within the Google Cloud control panel to manage my deployment. The cloud shell comes with all required applications and tools installed to allow you to deploy the Docker image I uploaded to the image registry without installing any additional software on my local workstation.

Now I will create the Kubernetes cluster where the image will be deployed that will help bring our application to production. I will include three nodes to ensure uptime of our app.

Set up our environment first:

When completed, you will have a three node Kubernetes cluster visible in your control panel. After a few minutes, the console will respond with the following output:

Just a few more steps left. Now we’ll deploy our app with kubectl to our cluster from the Google Cloud Shell:

The output when completed should be:

We’ll create a load balancer for the three nodes in the cluster so they can be served properly to the web for our application:

Now get the IP of the loadbalancer so if needed, it can be bound to a DNS name and you can go live!

A quick curl test shows me that my app is online! I have added some test data and as we can see, it’s part of my deployed application via Kubernetes to GCP and storing my persistent data in MongoDB Atlas.

When I am done working with the Kubernetes cluster, I can destroy it easily:

You’ve now got all the tools in front of you to build something HUGE with MongoDB Atlas and Kubernetes.

Jay Gordon is a developer advocate at mongoDB.