Hotmail is great. If you’re reading this in 1996. Hotmail (or HoTMaiL) was the first successful webmail client and, for those of us around at the time, it was essential to have an account. Hotmail was free, easy to use and acquired by Microsoft in 1997 for an estimated $400 million.

Despite the huge outlay, Microsoft neglected Hotmail for many years and the 2004 release of Gmail changed everything. For many years I’ve thought “ah, bless” whenever anyone reveals they have an @hotmail.com address. (I won’t mention what I think when someone states @aol.com…)

Moving forward, Microsoft is scrapping Hotmail and replacing it with Outlook.com. The service is in “preview mode” but accepting new account sign-ups. It’s free and, should you want to, you can retain your Hotmail address. Existing users can choose Options > Upgrade to Outlook to switch — you can switch back but, ultimately, Hotmail will disappear forever.

Outlook.com is a webmail client. It handles email. On the web. You won’t see anything revolutionary but the features, folders and options are logical and easy to use.

As well as email, Outlook.com can connect with Twitter and Facebook to show recent updates. Skype integration is coming soon and Yammer could be added once Microsoft completes the acquisition.

The online versions of Word, Excel and PowerPoint are provided with 7GB of free SkyDrive storage.

Microsoft has opted for a fresh, clean, minimalistic design inspired by the Windows 8 interface (previously known as “Metro” but soon to be dropped owing to trademark issues): 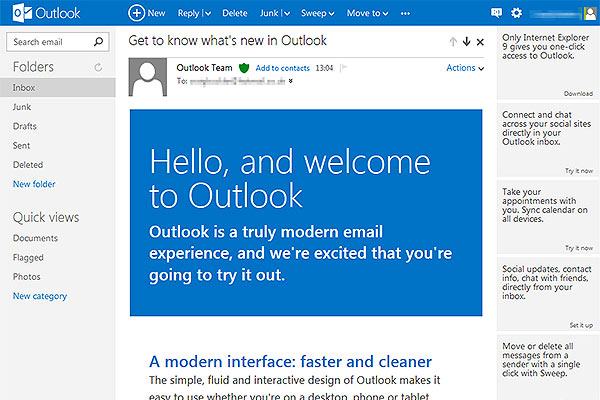 While Hotmail has improved in recent years, it looks cluttered by comparison: 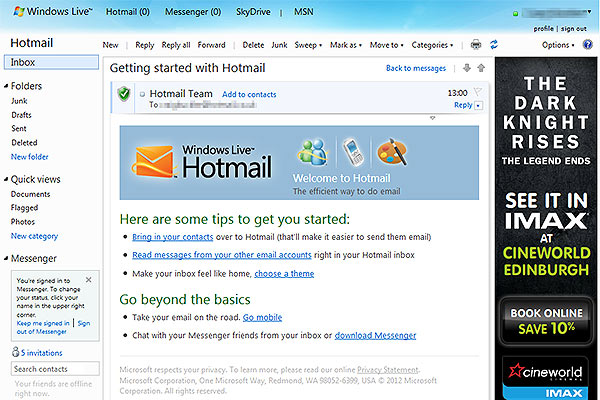 Some may consider the interface a little bland but I like it. Those who find Gmail too complicated will almost certainly prefer Outlook.com.

Outlook.com displays adverts based on words and phrases used in emails. Do you remember “Gmail Man” — Microsoft’s swipe at Google for reading your personal emails? Isn’t this the same thing?

No — according to Microsoft. Your Outlook data is private and personal conversations aren’t scanned to show adverts. You’ll only be served with a content-based ad when the email is a newsletter or some other bulk message. Person-to-person emails are not read.

Question: how does Outlook.com know an email is private without scanning it first?

Put it this way, whatever Microsoft are doing, it’s no worse than Google. Besides, until advertisers come on-board, the ads are predominantly for Microsoft software and services.

Microsoft squandered their Hotmail investment and it was overtaken by better systems. It’s good to see the company back in the webmail game even if it just provides some healthy competition.

Microsoft are re-entering a mature sector dominated by Google and, historically, they’ve never fared particularly well. Outlook.com is a great system but it’s no better than the alternatives. Yet. It will undoubtedly win some users but reaching and overtaking Gmail is another matter.

That said, Outlook.com gained one million users in its first six hours. Microsoft has a long journey ahead but they’re on the right road.