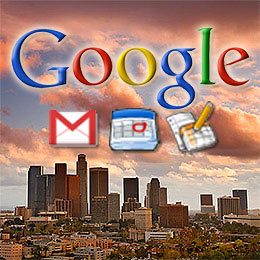 Los Angeles City Council has approved a $7.2 million deal to use Google’s applications for its 30,000 personnel. The council voted unanimously to replace several of their current IT systems with Google Apps and GMail instead of competing offers over a dozen other IT suppliers.

The deal is a massive boost for Google as it attempts to compete with Microsoft, IBM and HP in the business arena. Perhaps it’s the first sign that cloud computing is being considered as a serious proposition by major corporations.

Google’s ambition is to lure companies away from their dependency on Microsoft Office. Their success to date has been modest:

The LA contract offers Google a chance to demonstrate their ability to cope with large scale data handling, storage, and security. Computer Sciences, the third-party contractor implementing the system, has agreed to pay a preset penalty payment should a breach occur. With 30,000 users, even 1 minute of downtime represents a work time loss of 2 man-months (although this assumes the unlikely situation that every user is accessing the system during the same minute!)

Business analysts will be watching the project closely.

Would you consider switching to Google Apps within your company? Is cloud computing reliable and secure enough? Are Google’s applications really a viable alternative to Microsoft Office and other fat-client alternatives?

20+ Docs and Guides for Front-end Developers (No. 7)Louis Lazaris